Cain Velasquez is determined to prove that his knockout loss to Junior Dos Santos was nothing more than a fluke with a second win at UFC 166. BE's Connor Ruebusch takes a look at the calculated risk that is his knock-down, drag-out style.

Earlier today I wrote about Junior Dos Santos, who hopes to recapture the heavyweight title from Cain Velasquez after losing it over the course of a drawn out five round beating. Tomorrow will mark the third time the two men have fought, and will culminate a strange period in Cain Velasquez' remarkable career. First fighting for the belt with only eight bouts to his name, by tomorrow Cain will have spent the last three years and six bouts fighting just two opponents, twice crushing Antonio Silva, and now fighting a rubber match with Junior to determine who is indeed the better man.

It is often said that the loser has an advantage in the rematch, and there is some merit to that. Junior Dos Santos went away from his last defeat knowing exactly what things needed working on. With a clear blueprint for improvement, he will undoubtedly have a different approach to this fight. Cain, on the other hand, had little difficulty with Junior the last time around, and so will perhaps be tempted to change nothing. Hopefully he hasn't spent his camp with that mindset, however, because he will need every tool available to him if Junior returns to the Octagon prepared.

I already broke down the sequence that separated Cain Velasquez from consciousness in the Junior Dos Santos piece earlier today, but let's take a moment to get deeper into the method by which Cain was able to turn the tables on Cigano in the rematch.

Cain had more or less the perfect strategy for dealing with a fighter like JDS. Many criticized Cain's performance in the first fight, as he went for only one takedown. The fact that the fight only lasted 64 seconds didn't seem to matter. Cain is a wrestler, gosh darnit, and he's expected to go for takedowns. Keeping the criticisms in mind, Cain shot for a takedown in the first ten seconds of the first round of the second fight, and continued the wrestling assault throughout the fight, refusing Junior the space he so desperately needed to breathe and recoup.

But early in the fight it was clear that wrestling alone wouldn't be enough to put Cigano on his back. Fortunately, Cain had adapted his kickboxing for the purpose. 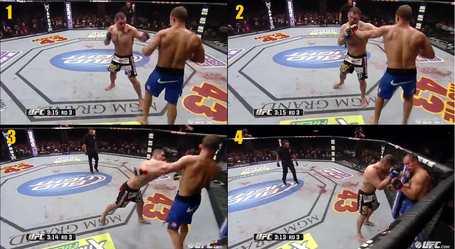 1. Cain jabs his way into range, making Dos Santos so consistently uncomfortable that he feels forced to back up until he is nearly at the fence.

2. Junior catches Cain with a jab as he comes in.

3. Cain eats the jab happily and takes a deep step to his left as he leans into a right hand that catches the retreating Dos Santos clean on the jaw.

4. Cain allows his momentum to carry him forward, right into the clinch. Just before making bodily contact with his opponent, he lands a short left hook. Because the hook puts his arm to the inside of JDS' arm, Cain is easily able to swim in his left underhook.

Cain's boxing isn't pretty. It isn't technical. But it sure gets the job done. Cain is like some kind of massive Nick Diaz, but with better wrestling and no reach advantage. Using his hands to close the distance, he happily traps Junior against the fence and alternates between pounding his body with punches and taking him down.

While I will always recommend that fighters put their hips into range before their heads, there is sound reasoning behind Cain's approach. His prime focus is not to box with Junior, but to clinch with him, pinning him to the fence and dragging him to the ground. In a recent interview Cain's former AKA stablemate Jon Fitch spoke about using technique rather than strength and power to beat the opponent. Cain and Fitch share this approach, as do other notable grapplers such as Demian Maia. Cain's ideal takedown is one in which he can misdirect his opponent so that all it takes is a small lift of the hips to send them toppling to the canvas.

By focusing on entering range head-first, Cain ensures that his head makes contact with Junior's upper body, keeping him pressed to the cage and standing tall, making it much easier to execute takedowns. During the second fight, Joe Rogan observed: "Cain is making. . . liberal use of his head. . . in fact it could be argued that some of those are headbutts." I would agree. Cain's inside fighting is borderline dirty, and it's a thing of beauty. By grinding the top of his head into Junior's face and chest, he is able to keep Junior as uncomfortable as possible, while sapping him of energy and cultivating the right circumstances for an almost effortless takedown.

Coming into range head first is a calculated risk, but there are ways to mitigate that risk. Cain has almost unwittingly demonstrated the value of striking from a lowered position before, in his entertaining brawl with Antonio Nogueira. 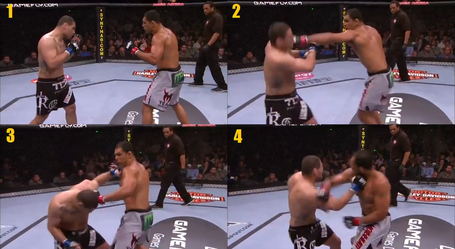 2. He manages to touch Cain with the punch, but he overcommits to his step.

3. As his momentum puts him too close for comfort, Cain dips as he throws a counter left hook. His eyes leave the opponent in the process.

4. He follows up with a right uppercut, shifting to his opposite hip and narrowly avoiding Nogueira's right hand.

(GIF) Similar to the last fight with Junior, Cain is the lower fighter, allowing him to gain an advantageous angle on his opponent. Nogueira, who is focused on finding Cain's moving head, ends up dropping his weight right down onto the rising uppercut, magnifying Cain's significant power.

But there are faults here. Cain is moving his head and lowering himself, but he almost unconsciously ducks his head and takes his eyes off the target in the process. This is a huge risk, especially against an opponent like Dos Santos, who can throw vicious uppercuts with lightning speed. Cain needs to Bend the Knees, not the Back. The advantages of getting low are many, but the defensive holes that Cain opens up by ducking his head make the practice more dangerous than it has to be.

1. Cain attempts to counter Junior's jabwith a takedown. He ducks underneath the punch, lowering his eyes.

2. As a result, he never sees Cigano's uppercut coming, and it sends him stumbling.

Had Junior still been in possession of his legs at this point in the fight, he might have pursued Cain with more punches while he was dazed. Even in his worn out state, the Brazilian still packs enough power to knock out a camel. Ducking head-first into punches is never a good idea, and Cain's head-forward style is only made riskier by the fact that he bends at the back, making it impossible for him to see strikes coming until it's too late.

Cain did show some improvements to head movement in the last fight with Junior, but it's still an area that needs improvement. Cain was all too close to being knocked out by Cheick Kongo on more than one occasion in their bout. 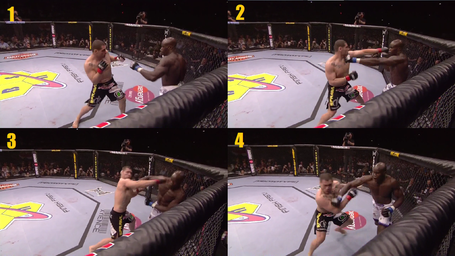 1. Cain stalks Cheick, whose back is to the cage.

2. He steps forward with a jab, both he and Kongo making slight contact.

3. He follows up with a right hand, but his head remains stationary. Kongo's head does not, and as a result his counter right catches Cain right on the button, while Cain's own right hand merely glances off the side of his head.

4. Cheick follows up with a second powerful right hand.

(GIF) Cain tends to move his head a lot before engaging, but his head still remains worryingly static during his attack. Despite mixing in slipping jabs and overhand rights against Junior last time out, he still showed this tendency to forego head movement when throwing in combinations. His punches are missing Built-in Head Movement. What is particularly striking (hah!) about this exchange with Kongo is that it is identical to the circumstances surrounding the knockdown in the second Dos Santos fight. Had Junior bitten down, stayed in the pocket, and followed his jab with a right hand (as recommended in my article), he could have planted a similar punch on Velasquez' chin, augmented by the fact that Junior packs an even harder punch than Kongo.

Cain's entire boxing game is built around entering into clinch range. Typically, once he reaches the clinch, he is excellent at keeping the fight there. Junior had a lot of trouble turning Cain toward the fence in their last bout. Still, these are heavyweights we're talking about, and they invariably possess considerable strength. Even with Cain's stellar clinch work, Junior was occasionally able to escape his grips throughout the fight. While he was able to do damage closing the distance, Cain too often let Junior create distance again without punishment. He needed to Strike on the Break. The times when he did take advantage of the sudden space were very successful. 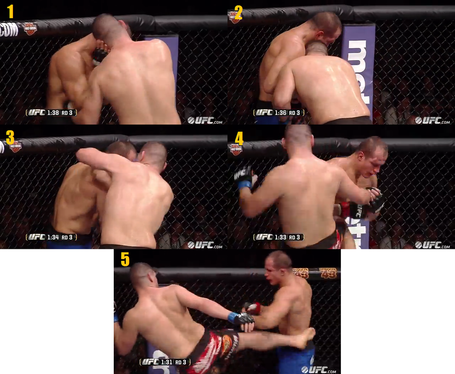 1. Junior repositions his head to the other side of Cain's, and Cain takes advantage of a momentary opening, slipping a hard uppercut into Junior's short ribs before he can replace his guarding elbow.

2. Now Cain uses his head to control Junior's posture, driving him up and into the fence, using his bodyweight to tire out the bigger fighter.

3. Similar to a push-off elbow, Cain uses head pressure to create momentum by suddenly removing his head and then getting in a short hook. (This is equivalent to suddenly letting go of the tug-of-war rope and letting your opponent's own resistance work against them, except in this version, there is a fist waiting for them instead of just muddy grass.)

4. Throwing the punch gave Junior an opportunity to disengage, and Cain lets him, but punishes his escape with a knee to the guts.

5. As Junior continues to circle away along the fence, Cain gets him one more time with a kick to the ribs, using the turnbuckle for balance.

Using tactics like this, Cain can establish that there are consequences for simply being within his reach. On the way into the clinch, he jabs and throws lunging power punches. In the clinch, he rips to the body with ill intentions. And on the disengage, he walks his opponent into powerful long range strikes. Near the end of the fight, Cain was even able to land a head kick by throwing it as Junior stumbled backward. (GIF)

The next level of this approach is to decide when and how the opponent disengages. The master of this was the great Peter Aerts, who would clinch his opponents and land powerful knees only to shove them away and right into the power arc of a deadly high kick.

Cain Velasquez and Junior Dos Santos are already a level above the rest of the heavyweight division. They are the elite, and they are both destined to go down in history among the likes of Antonio Rodrigo Nogueira, Mirko Cro Cop, and Fedor Emelianenko. The most exciting prospect in the heavyweight division is not a fighter, it is this: the fact that Dos Santos and Velasquez may still be improving. The thought that these elite fighters could, in a year, be even more diverse, more skilled, and more dangerous, is truly exciting.

But it's hard to think about that now, because we are a mere day away from witnessing something rare and spectacular: the conclusion to an exciting heavyweight trilogy. Fans of combat sports rejoice. This is gonna be good.