Bellator's November 2 pay-per-view could be a major bust if a recent report that they've sold less than 2,000 tickets is accurate.

Bellator's first pay-per-view effort was promoted with a sort of pro-wrestling spin originally (and via actual pro wrestling later), with a sort of false fight between Rampage Jackson and Roy Jones Jr. leaked to the media before the surprise appearance of Tito Ortiz to announce that he would be the one taking on Rampage. Setting aside that both men are shells of the great fighters they once were, it was a kind of masterful moment that created a rare kind of buzz in the industry. After all, how often are media reports that wrong and a PPV main event hidden well enough that a shock announcement makes it all the way to TV?

But the reality is that the main event is Tito vs. Rampage at least five years too late. And, while there are compelling undercard fights, they're fights with fighters that people expect to be able to see for free, not top drawing PPV talents. Bellator doesn't have the established brand to where they can get away with throwing those guys on a PPV the same way as the UFC. And one of their key attempts to sell the fight was a string of appearances on TNA wrestling for Tito and Rampage that even I (an admitted pro-wrestling fan) couldn't find as anything other than embarrassing.

And if the PPV news is likely to be bad, John Morgan of MMA Junkie tweeted over the weekend that the live gate numbers aren't better:

Just received word that Bellator's PPV event has sold approximately 1,700 tickets so far, with another 2,000 on consignment.

As some have pointed out, pricepoint may be an issue here. A few quick images looking for good seats for Bellator on November 2 and the UFC's Fox event in early December: 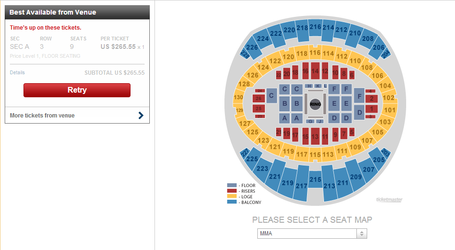 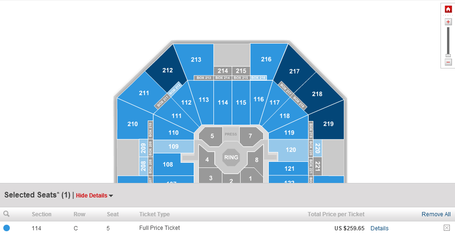 Sacramento and Long Beach are about a 6.5 hour drive apart, so they're not exactly in the same location, but both events are in California and if you're going to travel to one, would you rather go to UFC on Fox 9 to see a spectacular card headlined by a title fight that will determine the number one lightweight in the world along with a stacked card, or to a Bellator card headlined by Age In A Cage with a good undercard though featuring less notable fighters and fights?

Oh, and the cost for a very good seat is basically identical.

Yes, cageside seats (that's a blog!) are expensive for big fights, but over $275 once you factor in taxes and fees for a cageside seat to a Bellator event seems like crazy talk.

Again, the bad numbers are just a report from John Morgan. But, if true, it's going to look very bad on TV in the 13,500+ seat Long Beach Convention Center.