Ingemar Johansson and Floyd Patterson had perhaps the greatest right hand and left hook in boxing respectively during their brutal trilogy. Today we take a look at how Johansson pulled off the upset in their first meeting.

Floyd Patterson and Ingemar Johansson represented polar opposites both in the ring and outside of it. Johansson, one of the few Europeans to win a heavyweight title in boxing, was known for his fast living outside of the ring, being something of a playboy and for his brash though good-natured manner of speech. Floyd Patterson on the other hand was known as 'The Gentleman of Boxing' and his behavior towards his opponents reflected that. Inside of the ring they couldn't have been more different as Johansson represented a more traditional outfighter with a tremendous right hand - dubbed "Ingo's Bingo" or "Thor's Hammer" in various newspapers - while Patterson was the prototype of the peekaboo style, known for his ferocious left hook.

Johansson had a lot to make up for after being disqualified for timidity in the gold medal match of the 1952 Helsinki olympics, and had since gone on a dominating streak as a professional. Patterson meanwhile had become the youngest man to ever win the world heavyweight title at the tender age of 20. Johansson provided the hype for the match and one of the better quotes in boxing history as he noted shaking hands with Patterson was "like shaking hands with a lace curtain".

Heavyweight matches are often advertised with the "whoever connects first" angle - but it is rarely true as both men miss until one is exhausted but both Patterson and Johansson rank among Ring Magazine's 100 Greatest Punchers of All Time. Roberto Duran's bragging that he had the right hand of Ingemar Johansson should indicate that Ingo's Bingo was considered the premier power punch in the world for some time. In the Johannson - Patterson trilogy, especially as Patterson was known for his weak jaw and brutal counters, a single punch could change the course of the fight.

When the two fighters met for the first time in 1959 the strategy of each was as obvious as it had been in the build up to the fight. Every time Johansson attempted a jab - Patterson squared his hips and shoulders, assuming a crouch and threatening his sinister left hook. 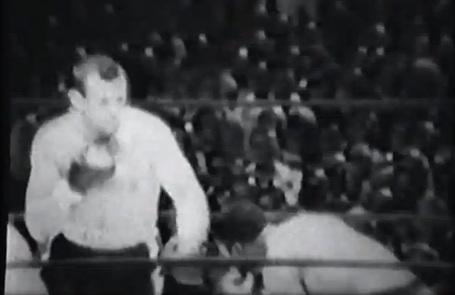 Notice how Patterson crouches almost to the height of Johansson's hips, squaring his shoulders and preparing to leap up off of his left foot. 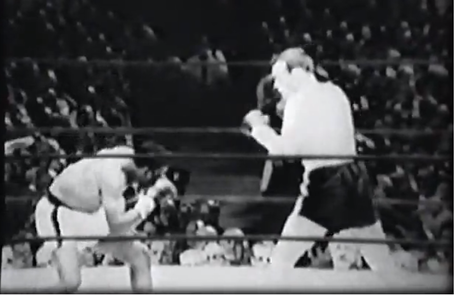 Here you can see Patterson's squat from another angle. Patterson was trained by Cus D'amato who famously went on to coach Mike Tyson. Patterson may be viewed as something of a prototype of the style which Tyson used to dominate so many men in his prime.

Patterson, however, had the habit of becoming something of a one dimensional fighter. He had power in his right hand, his knockout of Pete Rademacher two years before this fight should serve as evidence of this.

Patterson's right hand was clearly less powerful than his left and far less dexterous - serving only to fill space in his rapid combinations ordinarily. His main choice of counter, the inside slip or duck to left hook - also made it difficult for him to focus his attention on throwing his right hand anyway. From his squared position he could not rotate his hips into his right punches much whereas his left punches could be thrown with great venom from the coiled stance that he took. A look at the uncoordinated right lunge punch that Patterson makes at the 1:42 mark brings to mind the wild, stepping punches of a young Alistair Overeem before he began to work diligently on his hands.

Remembering that this fight boiled down to Ingo's right hand versus Patterson's left hand, all that Ingomar Johansson had to do to scientifically secure a connection was to move to a position where his right shoulder was inside of Patterson's left. This would assure him a straight line to Patterson, inside of Patterson's left hand. While a fighter may be fast enough to beat the scientific boxer to the punch even when he secures this kind of dominant position early on, within a few minutes or rounds of fighting scientific boxing will start to win out over fast twitch reactions.

Johansson's jabs did little to bother Floyd Patterson, and Floyd remained disciplined in his stance, simply moving out of the way of most. After he had spent some time circling away from Patterson's left, Johansson began to use the set up which ultimately won him the fight. It's a beautiful little three piece biscuit which can be easily imitated and should be a well practiced combination for anyone looking to improve their hands.

Around the 2:20 mark of the video Ingemar Johansson begins throwing out lackadaisical left hooks to keep Patterson thinking about protecting the right side of his jaw. Obviously throwing a left hook while moving away from the direction of the punch will have little more than slapping power - but if one can lure the opponent into becoming a perfectionist with his defense one may easily land hidden shots. At 2:40 Johansson throws the left hook and tries to catch Patterson with a right hand off of it but Patterson reacts in time. The rest of the first and second rounds are the same - Johansson flicking the jab and the occasional left hook or right swing to keep Patterson on his toes.

At the start of the third round Johansson connects his set up perfectly. Stepping to the left with a jab (a safety lead, but with less than stellar form), Johansson then throws a slapping left hook with his left hand, moving himself even further away from Patterson's own left hook. Now Johansson's right shoulder is almost level with Patterson's centreline and his right straight shoots through completely unobstructed. (Thanks to Zombie Prophet for the gifs and check out our collaboration on The Greatest Knockouts of the 1950s Part 1 and Part 2 to see more!)

The genius of this set up is that the left hook will almost always connect on the opponent's forearm or glove as he defends - which can be used to physically push him into the line of the right hand even more easily. The danger of circling into the opponent's right hand is almost completely alleviated by forcing him to check the left hook - countering with the right hand after squaring up to block with it is not a natural movement and requires a great deal of practice to use in a fight. Johansson wasn't the most scientific fighter in the world, but this 1-3-2 combination was world class and was the perfect foil for a squared up fighter such as Patterson.

Floyd Patterson was so stunned by the first right hand that he got up and began walking to his corner - only to walk onto a left hook that he literally didn't see coming. To Patterson's credit he is remembered as having one of the most vulnerable chins in heavyweight title history, but he certainly had one of the biggest hearts. Johansson came after him like a man possessed in order to finish the champion, flooring him numerous more times, but every single time Patterson got up, the fight being called off as he looked for the referee to let him continue.

The two fighters met twice more, each bout ending with a brilliant knockout. Floyd Patterson went on to become the first man to win back the heavyweight title, as well as remaining the youngest man to win it until the arrival of Mike Tyson several decades later. We'll look at the rematch and rubber match in the next edition of Greatest Rivalries.