The clinch has always been an important position - but many wrestlers still struggle to get to the clinch on their own terms without being hit. Today we look at drawing an opponent into the clinch with examples from Randy Couture and Floyd Mayweather.

Share All sharing options for: Randy Couture Judo Chop: Boxing into the Clinch

Something which I have always found to be interesting about wrestlers is the longevity which their art can offer their mixed martial arts careers. Of course there are plenty of examples of great wrestlers who have gone on to become train wrecks, such as Mark Kerr, but the more thought you give it the more you realize that it is the men who can control the action and avoid punishment with their clinches who are able to keep their health throughout lengthier careers than their peers.

Inspired by the retirement of the great Dan Severn at the ripe old age of 54, today I am going to be focusing (rather unusually) on wrestlers. I should clarify that by "wrestler" I don't mean the Kevin Randleman breed of wrestler. Randleman had a vertical jump which looked as if it could be used to escape the octagon, and could shoot a successful double from half way across PRIDE's thirty foot ring but he soon faded. Instead I should substitute the word "clinchers" - for he who controls the clinch controls the match. The man with the better clinching skills and technique in the clinch is able to avoid the punishment that strikes do to a fighter's body and brain.

This rule is universally true in combat sports from MMA to kickboxing to boxing. Even in sports in which it is outlawed to clinch - such as karate and K-1 - it is a useful means to escape a bad situation and will likely be tolerated for a while before the referee does anything about it. Take a quick gander at Floyd Mayweather's clinch heavy performance against Ricky Hatton. Hatton made a career of taking punches to give punches because he hit harder than almost anyone in his division. Every time Mayweather hit Hatton coming in, he was immediately chest to chest and the majority of the time had a good underhook and a good overhook - the classical tie up.

As I said he who controls the clinch controls the fight and Mayweather uses it to pot shot his opponents before immediately getting chest to chest and preventing them from hitting him back. Once the opponent is happy to clinch back, however, Mayweather begins his typical elbow tactics - cross facing his opponent and landing free shots as their hands are in a position of trying to clinch, rather than trying to box. Notice how many times Floyd hits his opponents while he is doing more to wrestle them than boxing.

The first major exponent of Greco-Roman wrestling in MMA, Randy Couture remains one of the few fighters to make full use of opportunities to clinch and the damage which can be done to the opponent from there. Bulldozing in worked on the casual martial artists who were still present in the earlier UFC events - but against Vitor Belfort, Couture showed that the clinch did not have to always be entered offensively - as is the method in wrestling - but could be entered in defence as it is in boxing but as a means to the wrestler's ends.

Here Couture attacks with a back-handed jab which had little chance of landing or causing any damage - but he immediately moves away from the counter which Belfort swings at him.

As Belfort chases Couture back with strikes (as is his modus operandi) Couture stops retreating and smashes in chest to chest with Belfort, securing an underhook on Belfort's punching left hand.

The genius of Couture's approach was that when a fighter is on the defensive his elbows are tight to his body and there are few good handles to grab a hold of. If an opponent holds this posture Couture can struggle to get a good clinch on them. Against Brandon Vera, Couture kept taking a grip on Vera's neck and being shucked off as he tried to move Vera. If the opponent's elbows can be lured away from his body, Couture can move in and grab at least one underhook with ease.

Here Couture attempts to bait Belfort with a jab again but Belfort throws a left straight without committing and Couture leaves it at that.

Where a good boxer would slip and look to counter punch - Couture's counter is the clinch, where he can tire his opponents out, move them around and throw them. Here's another example of Belfort attempting to punch Couture, then Randy leaning back and parrying before getting the underhooks on Belfort's swinging arms. 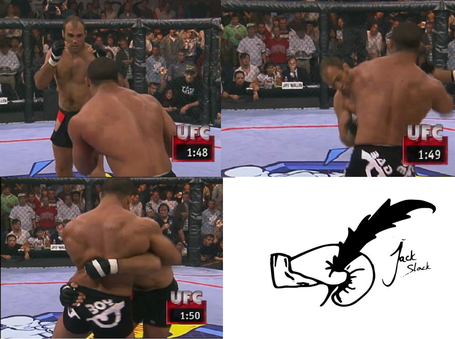 Couture got hit a few times in his fights with Belfort because his method in the first was far from a science, more a strategy which he was developing. Later in Couture's career, however, he began to jab into the clinch - but not in the way that most remember when they think of jabbing into the clinch. In a recent piece I observed that UFC heavyweight champion, Cain Velasquez often jabs his way in with his head bolt upright and can be force fed straights while doing so - as Cheick Kongo managed to and as an exhausted and flustered Junior dos Santos attempted to do. 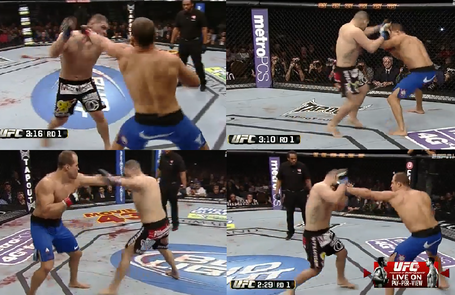 Couture's method of moving to the clinch has evolved to be based around a dipping jab - taking his head offline to his right and inviting counter punches. Notice that when Randy jabs he dips his head very low to his right side - ducking it down behind his left shoulder. This sort of position invites counter punches but provides much more protection than his leaning back against Belfort did. As soon as the opponent opens up with punches, Couture is chest to chest with them and they have given him an underhook.

One advantage of constantly using this dipping jab - other than avoiding most counter punches - is that Couture can invite counter punches with the opponents right hand which he can simply move inside of and underhook. Against Gabriel Gonzaga, Couture began using his dipping jab early and hit Gonzaga hard while the latter was moving in. 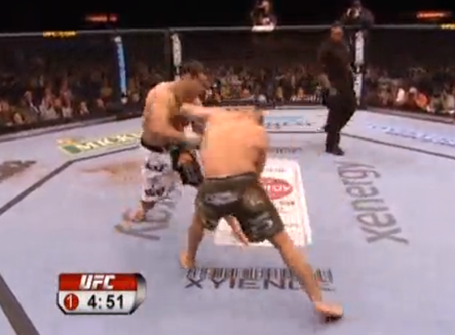 Later in the same fight, Gonzaga threw back a right hand in response to Couture's jab and Couture was able to underhook it and get a good punch off with his right hand. Couture used the inside slip to get close enough to grab a hold of Tim Sylvia numerous times in their bout.

A final advantage of Randy Couture's dipping jab over the traditional jab and run in to clinch method is that Couture dipped so low with his jab that it could be easily turned into a duck to get control of his opponent's hips (something which Floyd Mayweather even used against Hatton in the highlight mentioned earlier, and which Prince Naseem would do when he was in trouble). After Gonzaga clipped Couture with a hard right hand, he chased Couture with another, Couture was able to slip to the side of and below the punch and get control of Gonzaga's hips - which he soon turned into the first takedown of the fight.

Randy Couture was a man of many tricks in the octagon - but it is hard to find a Couture fight in his later career where he doesn't use this slower, dipping jab to draw attacks from his opponent or sneak his head in towards their chest or hips. The techniques needed by a grappler to secure a good clinch needn't be many - Couture used his dipping jab and an occasional overhand, Fedor Emelianenko used his right hand lead almost exclusively - but anything beyond the traditional jab straight in method is a step forward in the evolution of wrestling in MMA, and a massive bolster to the success rate of wrestlers trying to obtain the clinch.

Every wrestler should be looking to simplify and improve his striking to work with his primary skill rather than in place of it when he can't get his techniques working. After all, a many wrestlers never forget their old tricks once they get to the position where they can use them. Here's to ageing gracefully in the brutal world of combat sports.