Ryan Bader scored one of the only submission victories at UFC on Fox 6 this past weekend, with a unique looking choke hold that quickly defeated veteran Vladimir Matyushenko.

With what could initially be dismissed as a 'strength hold', UFC Light Heavyweight and TUF winner Ryan Bader made short work of respected veteran Vladimir Matyushenko with a unique looking variation of a guillotine choke during the prelims of the UFC on Fox 6 event this past Saturday in Chicago, Illinois. Similar to Matt Hughes' utilisation of the Dave Shultz Front Headlock though, there is technique present in Bader's arm-across version, although interestingly both were set up by a punch that floored both of their opponents.

After the initial feeling out period that starts most fights, Ryan Bader fires a straight left into the face of Matyushenko, before moving out of punching range himself. He's got the veteran's attention, and Bader moves in again, dropping his level slightly as he comes in with a wide looping left hook that connects and sends 'The Janitor' reeling backwards and to the mat. Bader swarms on Matyushenko looking for the finish, but Matyushenko is able to get to a seated position and reaches for Bader's legs, desperate to stay in the fight and turn things around. Bader instinctively sprawls, driving his hips onto the back of Matyushenko's head before looking to control with a Front Headlock.

Bader begins to work the arm across in the Front Headlock, but makes the classic mistake of taking his weight off of his opponent and onto his knees, which now rest on the mat. Some will argue it makes little difference in applying a choke if you are on your knees and this is true if you are comfortable to pull someone into your guard once you have control of their head, however in wrestling you give the opponent the opportunity to counter or reverse now that he is more comfortable to do so.

Matyushenko does just this as he powers himself back to a standing position, though his head is still under the control of Bader. Usually defense of the Front Headlock begins on the ground, either attempting a 'Peak Out', or a 'Sucker Drag' if the attacker's controlling elbow is within reach.

Before Matyushenko has a chance to escape, Bader is able to get Matyushenko's arm across his body in the Front Headlock, and then steps in his right leg to block that arm from returning to a more natural alignment. Bader pulls Matyushenko on top of him and attempts control of the leg, while Matyushenko remains in a tripod instinctively to defend. However, as you may be able to see in the bottom right image, the choke appears to be tightening from this position as Matyushenko's own shoulder is not only across his neck, but it is rotated further into it, adding pressure to that side's carotid artery while Bader contracts his own arm against the other. 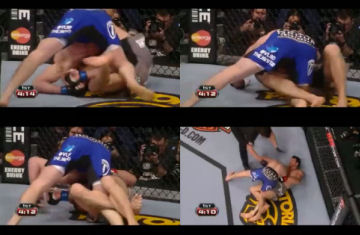 Matyushenko's opportunity for escape came when Bader had minimal control of his legs. Bader has Matyushenko's arm wedged against his body, and limp-arming isn't an option as a result due to the mechanical impossibility. Matyushenko's only option would have been to jump to side control which would at least buy some time, though he still would have to work his way out of a difficult hold. One option to do so is use his right knee to drive down on Bader's arm in an attempt to break the hold.

Instead, Matyushenko has given Bader enough time to attempt a 'Lockdown' half-guard, a popular method made well known by Eddie Bravo, though it is thought to originate in Judo (Bravo cites 'Judo' Gene LeBell as the man he learned the 'Lockdown' half-guard from). With this additional control and the space closing around his neck, Matyushenko is forced to concede the strangle.