UFC on Fox 6: The Striking of Pettis and Cerrone

Today we look at the most exciting match up in months. Will it be the chopping power kicks of Donald Cerrone that carry the day, or the spectacular kicks of 'Showtime' Anthony Pettis?

Share All sharing options for: UFC on Fox 6: The Striking of Pettis and Cerrone

Donald Cerrone and Anthony Pettis meet at UFC on Fox 6 to decide who is next in line for a shot at the lightweight belt following the title bout between Gilbert Melendez and incumbent champion Benson Henderson. Both men are known for their kicking finesse and their exciting performances on the feet - but also for their well rounded grappling, particularly their active submission games. Donald Cerrone represents more of a traditional Thai style kicker with American style set ups: Cerrone lives and dies by his switch kicks and butchering of his opponent's legs. Anthony Pettis is a more traditional martial arts style snap kicker, happy to pick his lead leg straight up off of the floor and throw it without a step or a switch to wind it up, mainly working to bring his right leg in through a crazy angle without much set up.

Today we will examine, in brief, some of the factors at play within the striking in this bout. Of course nothing is truly predictable about a fist fight (or more likely a foot fight in this case) but fighter's preferences should always be examined by fans, fighters and coaches alike.

Donald Cerrone's favourite method of fighting is to create distance by backing his opponent up, then run through that distance into a hard low kick. This is when Cerrone is at his absolute best and it affords him the most opportunity to use his numbing, mule like kicking power and to set his opponent up for the many high kicks which he sprinkles into his performances. Cerrone has shown wonderful variety on the feet with push kicks, stepping knees, upward elbows and inventive combinations but like Featherweight champion Jose Aldo, has spent a great deal of time mastering the left hook into right low kick. For everything else Cerrone mixes in to confuse and confound opponents, this is his hurting combination. Cerrone often throws a right straight as a lead, from a distance where it is neither likely to connect or be countered, then steps with a left hook against his opponent's guard to keep their feet planted, then steps again to run into his right low kick.

Allowing Donald Cerrone the distance to run into his kicks is the absolute worst thing that a fighter can do against him. Cerrone has the power to pâté muscles with his shorter switch kicks, when he begins running into long, rear leg kicks opponents quickly stop being able to fight back with any power. Punchers such as Jeremy Stephens look ineffective when they have nothing to drive off of - imagine how game crippling eating such low kicks could be to the game of another kicking based striker such as Pettis. 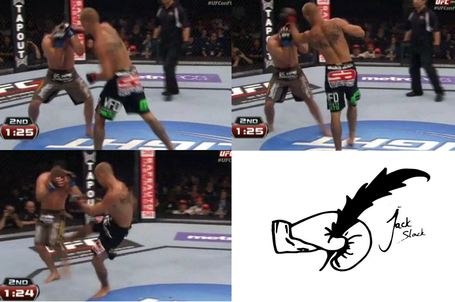 Cerrone attacks with a right straight, a stepping left uppercut and steps again to run into his low kick.

Donald Cerrone's other main trope, if he hasn't got an opponent backing up, is to switch between the switch kick to the inside of the opponent's lead thigh, and the switch kick to the head. The standard of Muay Thai switch kicking in MMA isn't especially high across the board, but Cerrone's success with it has arguably been greater than anyone else. Cerrone's bouts with Denis Siver and Melvin Guillard were won by his switch kick alone. Where Melvin Guillard attempted a slip of a flashed set up punch and ducked right into the kick, Denis Siver's guard seemed to be solid but his floating right arm was not strong enough to nullify the power of Cerrone's kicks and Cerrone simply kicked through it. 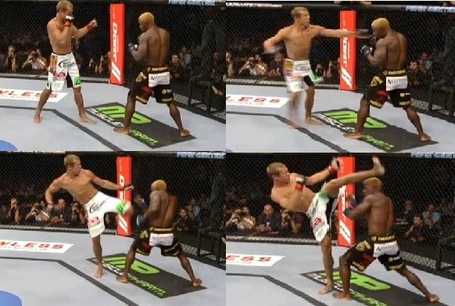 If Donald Cerrone has any great failing in his game it is his punching while on the back foot. If an opponent is covering or retreating Cerrone can whip in the long punches which favour his build the most - one of the reasons that he looked so sublime against Jeremy Stephens was simply having this room to operate. If Cerrone is being pressured back, however, and begins punching his elbows flair out and he starts to push out punches which are easy to cut inside of. Nate Diaz was able to stay in Cerrone's face and outland him so severely in the opening round of their bout because every time they both attempted punches Diaz's uncompromisingly straight punches would shoot straight inside Cerrone's flared elbowed attempts at the same punches.

Cerrone's flaring elbows even on his jabs made it easy for Diaz's tight elbowed straights to pass inside of Cerrone's punches.

The length of Donald's limbs simply makes it hard for him to punch without leaving substantial openings unless the opponent is running or staying right on the end of his reach. Another example of Cerrone's punching form failing him is his most recent bout against Melvin Guillard - Cerrone threw out some punches as Guillard backed away and didn't expect Guillard to stop and shoot a punch inside of Cerrone's looping swings.

Anthony Pettis is most commonly remembered for the showtime kick - a spring off of the fence into roundhouse kick in his incredible bout against Benson Henderson. Pettis spends the majority of his time in the cage looking for spectacular high roundhouse kicks. Pettis usually does this through his use of movement.

Notice from 4:32 of the above video that Pettis begins to side step away from his opponent to the right, dropping his right shoulder as he does so. Moments later Pettis looks as if he is going to circle right the exact same way but instead picks up his left leg and lands a beautiful head kick.

Against Joe Lauzon, Pettis assumed a southpaw stance and continued to circle to his left. This is typically the "wrong" direction because it carries a fighter into his opponent's power hand and leg - also lengthening the path of the circling fighter's own rear hand and leg. What it did though was to force Lauzon to constantly turn - which led him into some punching flurries from Pettis and eventually dragged his lead hand out of position when Pettis kicked over it. Circling toward the side from which you want to kick may lengthen the path of the kick but it also gives the kick a good chance at circling around the back of the opponent's defending forearm - this is a strategy seen more in traditional martial arts point sparring such as Tae Kwon Do and Karate than in Muay Thai, but it seems to work pretty well nonetheless. 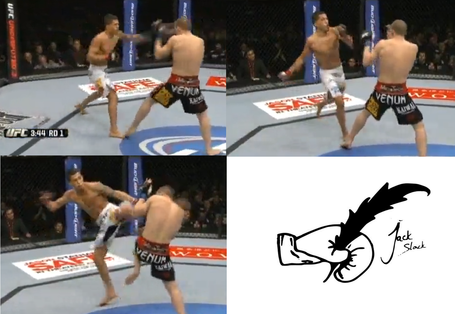 Pettis' circling to his own left and throwing plenty of straight punches got Joe Lauzon reaching to parry - this made it even easier for Pettis' shin to circumvent Lauzon's right forearm.

Something which has gone particularly underappreciated in Pettis' game is his willingness to eschew his kicking game when need be. Against Benson Henderson, Pettis was able to surprise the then WEC champion by standing in his typical wide stance (as if ready to throw his high kick on a moment's notice) then walking Henderson down until Henderson kicked and Pettis could take it on his forearms and come back with punches. By walking down Henderson and trying to catch him with punches while he was on one leg, Pettis was able to put Henderson bad position a couple of times in their bout. Here is a great example as Henderson backs into the cage and Pettis uses a left hook to keep Henderson from circling out in that direction, in the meantime moving his own feet to a dominant position and landing a hard right straight as Bendo was trapped against the fence.

This wasn't a one off either - Pettis' entire plan on the feet seemed to be to pressure his way through kicks, get Bendo against the cage and either attack or give Henderson the space to lash out and get countered. The Showtime Kick of internet fame came, as I'm sure you will all remember, as Pettis allowed Henderson to circle off of the cage. Afterward Pettis said that he had practiced the kick, and if you consider how much time he spent trying to back Henderson onto the fence this makes much more sense.

Here is Pettis forcing his way through two of Henderson's kicks and attempting to counter with punches - all the while backing Henderson up.

Here Pettis teeps Bendo into the fence, then keeps him there without rushing in and risking falling for a takedown. This places the pressure on Henderson to get off the fence.

Seconds later Bendo attempts to superman punch his way off of the fence, Pettis backs up and counter punches. This pattern of walking Henderson to the fence, giving him space and attempting to counter worked several times throughout the fight. Fighters tend to get a little wild when they are left against the fence, it is an understandably uncomfortable place from which to kickbox.

So Pettis likes to walk kickers down - which worked incredible well for Nate Diaz against Donald Cerrone - but Pettis' preference for moving away from punches (as seen in the first video) rather than slipping or blocking could give him some grief against Cerrone. Cerrone's punches seem to exist primarily for the purpose of backing his opponent's up (in the same vein as Jose Aldo's) and preventing them from checking the hard low kicks that follow. Here is Ben Henderson backing Pettis up with punches and chopping his legs out from under him with a hard low kick. Donald Cerrone doesn't need too many connections like this to start ruining Pettis' night.

This fight could unfold on the feet or turn into a grappling match as is so often the case between two strikers. Should the bout play out as a striking match (as so many fans hope for) arguably the biggest factors at play here are how well Pettis can jam Donald Cerrone's kicks or how effectively Cerrone can force Pettis to move backward. If Cerrone forces Pettis back he will have the power kicks and will be able to take away Pettis' kicking ability and movement. If Pettis can stay close to Cerrone and use his shorter reach to land some punches inside of Cerrone's, he can keep Cerrone backing up and throw his own kicks into the bout whenever he sees the opportunity.

Fighting is rarely as simple as not taking a step back, and I dislike when coaches encourage their charges to do this, but the science here is that the man moving forward has the ability to kick with power, the man backing up rarely does.