Pulling Back the Curtain on Muhammad Ali

We pull back the curtain to reveal what made Ali so successful in the strongest heavyweight division in boxing's history.

Share All sharing options for: Pulling Back the Curtain on Muhammad Ali

Today I want to set aside a few moments to talk about the incredible and inimitable Muhammad Ali. Ali turned 71 at the weekend and while this received plenty of media attention I am ashamed to say that I have never talked at any great length about The Greatest of All Time. Ali was at one point the most famous man on earth and children in Africa would have no idea who Richard Nixon was but could tell you all about Muhammad Ali. Ali truly transcended the sport of boxing with his outspoken positions on civil rights and the Vietnam war, but in truth he had gone far beyond traditional boxing even inside the ring.

It is an oft recited cliche that textbooks do not have all of life's answers yet in boxing the "textbook style" is considered the pinnacle of boxing technique. Muhammad Ali had the hand speed, foot speed, endurance and reach to be a very good fighter if he chose to follow the orthodox methods laid out by other greats. Instead, however, Ali developed his own style which was different to anything before seen in the heavyweight division as he carried his hands low, drew punches with his face and pulled straight back out of range of them. Read on and we will pull back the curtain on some of the tricks which made Muhammad Ali the best fighter in the world during the heavyweight division's greatest era.

The stories of Ali developing his style in Florida do not cast him as a world beater - they describe him instead as a gangly young man who refused to defend himself in the orthodox manner, often getting beaten up while sparring as a result. However the hours of practice paid dividends and Ali's style became something which was extremely difficult to predict or train for. One of Ali's most peculiar quirks was his method of performing an inside slip. As his opponent jabbed Ali would slip slightly to the left but seem to be committed to leaning back as he did so in order to keep his head away from their right hand.

Here is an example of Ali's bizarre slip in his bout with Zora Folley. Notice how Ali is almost leaning backwards as opposed to hunched slightly over in the traditional method of slipping. The inside slip is the much less often used slip against a jab and it is never done without a guard in orthodox boxing because it carries a fighter's head towards his opponent's power hand. Ali's upright posture maintained distance from his opponent's right hand, however, and he was able to slip it when and if it came.
Ignore the atrocious music and watch this short highlight of some of Ali's evasions.

One of Ali's greatest tricks was to make opponent's over commit - hence the pulling straight backward from punches. Fighters are hard to tempt to run in on an opponent who has his gloves up and looks ready to hurt them, but disciplined, world class boxers chased Muhammad around and threw themselves off balance simply because he seemed to be an open target.

Here Sonny Liston, a very sound technical boxer, throws two different jabs which he had to run all the way across the ring to attempt. Notice in both how out of position he is and how exposed the right side of his jaw is.

The point of Ali's inside slip and leaning back away from punches was to leave space for him to land his chopping right hand as a counter. This punch carried none of the traditional weight that a punch thrown with full body rotation would, but the timing and the fact that his opponents were often diving in with no regard for a counter from Ali could make this a fight changer. After the second bout with Sonny Liston which ended very abruptly as Liston went down off of this counter, this punch was pulled into the spotlight and Ali referred to it as "The Anchor Punch", declaring that it was a technique which had previously been used by Jack Johnson. Personally I have seen all of the film available on Jack Johnson and have never seen him use a punch with a similar set up to Ali's (Johnson was more a clinch fighter than anything else) but you cannot argue with the results that Ali had with it.

Notice that Ali fakes a jab to draw Liston, then immediately pulls his head back as Liston lunges in with a jab. Ali's short right hand connects over the top and clips Liston cleanly.

The second Liston bout is worth writing off because there was so much intrigue around it. The lowest attended heavyweight title bout of the 20th century, it was well known that Liston had mob connections which led to rumors that he threw the fight. Personally I do not doubt that Ali's counter hurt Liston, he had eaten it many times in the previous fight and didn't seem to like it or have an answer, but it's pretty easy to tell when a fighter can't get up and when a fighter won't get up. This was not a one off counter though - Ali used it throughout his career when he could get an opponent chasing him. Zora Folley fell for this punch several times and was knocked down twice by it.

Here Folley comes in with a jab, Ali leans back and inside of it, before placing his right hand through the hole onto Folley's jaw. 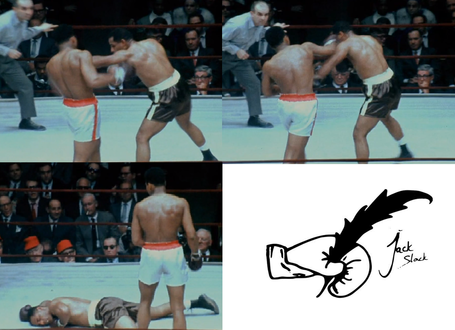 Here Ali does the same and leaves Folley face down on the canvas.

The trick with Ali's counter punching was all in his back foot placement. Ali would bounce in or start close with a back handed jab, then move his rear foot back so that he could lean his weight onto it, before pulling his lead foot back as he threw his right hand. The punch was a feat of speed and timing rather than a movement of body weight. 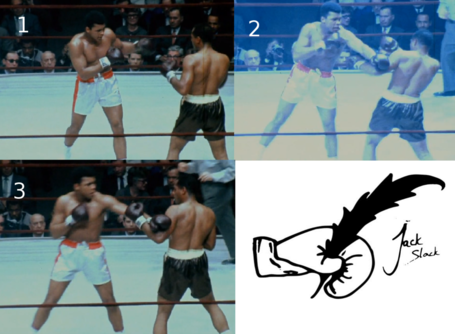 1. Ali moves into range of Folley who is refusing to lead.

2. Ali jabs in hopes of getting a retaliation out of Folley.

3. Ali's places his right foot back but leaves his lead foot behind, ready to counter should Folley chase him.

Lean back counter punching is so reliant on rear foot placement that there are a fair few photos existing of Ali almost in the splits as he attempts to evade punches from his opponents. This one of he and Joe Frazier is a personal favorite. 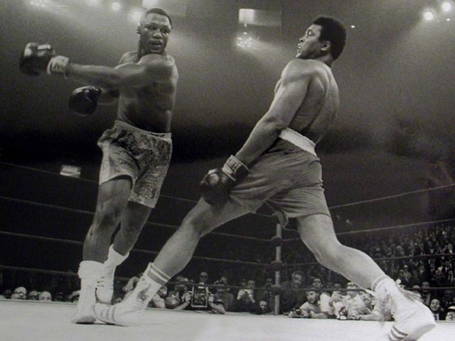 When Ali's opponents wouldn't open up offensively and no obvious opening was in sight to punch through, Ali would often try to play with his opponents' heads by waving both hands up and down or covering both of his opponent's hands and hoping that they responded. Against George Foreman, Ali used both hands in this manner so often in getting Foreman to chase him to the ropes that Norman Mailer described the fight in the incredible documentary When We Were Kings as like "two boys fighting in the playground". Against Zora Folley, Ali used this tactic to get Folley to play patty cake with him before unleashing a flurry of punches. 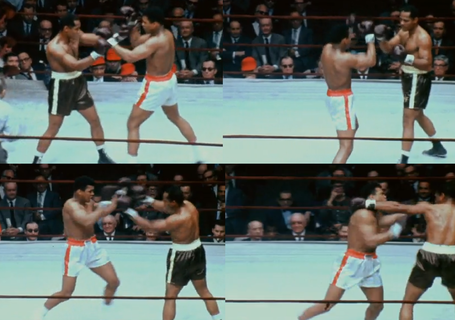 Here Ali convinces Folley to play patty cake with him, bringing Folley's hands out of position and allowing Ali to leap in with a flurry in the bottom right still.
An excellent example of this technique in action is Ali's early bout against Brian London. Notice how Ali's double handed feints cause London to over-react and expose openings for Ali's flurries.

In truth there is a great deal more to say about Ali's technical prowess because he brought a different game to all of his great fights. The rope-a-dope strategy he employed against George Foreman is already legendary, but Ali's clinch heavy shutting down of Joe Frazier in their second bout deserves as much appreciation, as do his retreating left hooks against Oscar Bonavena. Ali was a wonderful tactician and more importantly a fighter who eschewed traditional boxing form in order to do things his own way. I am of the opinion that there have been a few heavyweights with the skills to beat Ali even at his best, but the man showed consistency in a division which was stacked with some of the greatest names in heavyweight history, where other heavyweight greats have had a relatively sparse field of opponents. I will leave you with this wonderful highlight by Gorilla Productions: