Anton Tabuena of BloodyElbow.com compiles his favorite 2012 photos from Asia.

Share All sharing options for: The 20 Best Asian MMA Photos of 2012

Being a correspondent of SBNation from Asia, I have covered several MMA shows from the biggest and best promotions in the region such as ONE FC, Legend FC, URCC, PXC, and even the UFC during their Asian campaign. Since 2012 just ended, I decided to compile some of my favorite photos I've took this year from all these shows.

I've took a lot of photos during the past year, and I even had my camera stolen at one of those events. Some of these I picked because of the visual attraction it brings, and some are here just because of a certain moment it had at the time I shot it, either way, here are 20 of my favorite shots from 2012 in no particular order: 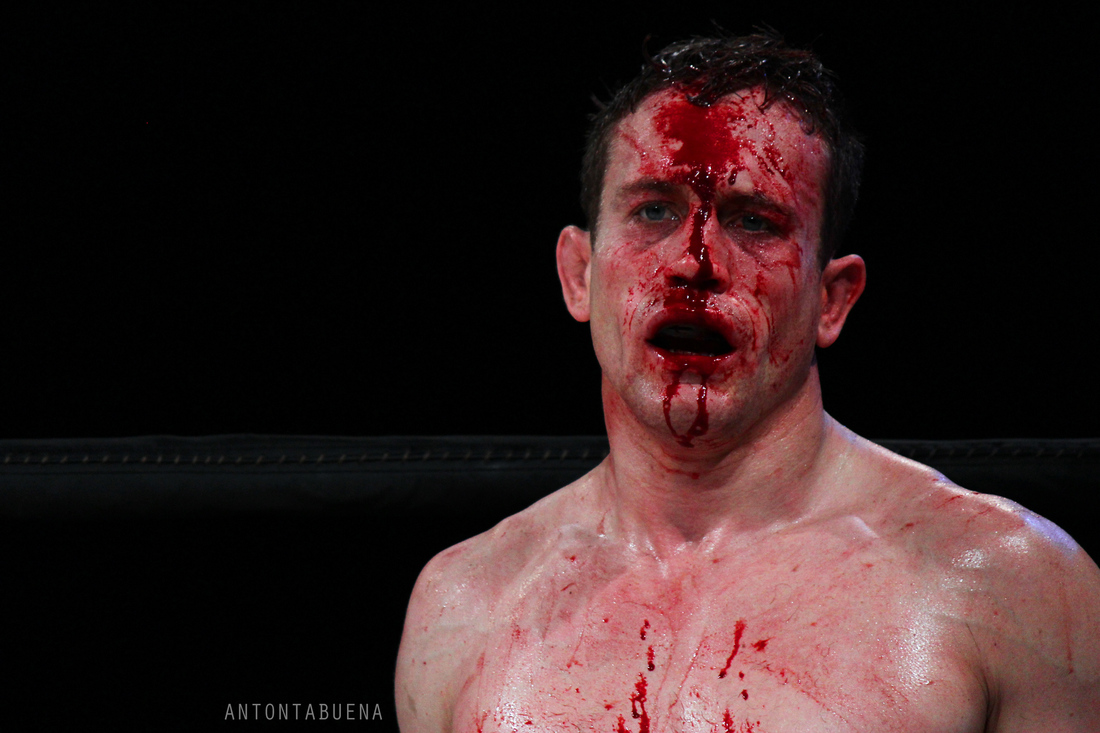 1. Rob Hill wearing a crimson mask. This was shot at Legend FC 10 in Hong Kong, where the always entertaining Rob Hill came out dressed as Ryu from Street Fighter, and fought the former King of Pancrase in Koji Oishi. He was able to make it an entertaining scrap, but when Oishi cut him open, it became one of the bloodiest fights I've ever seen live. Blood kept flowing down his face, and Hill was literally spewing and spraying blood all over the ring. Hill fought valiantly, but the referee was forced to stop the fight in the third round. 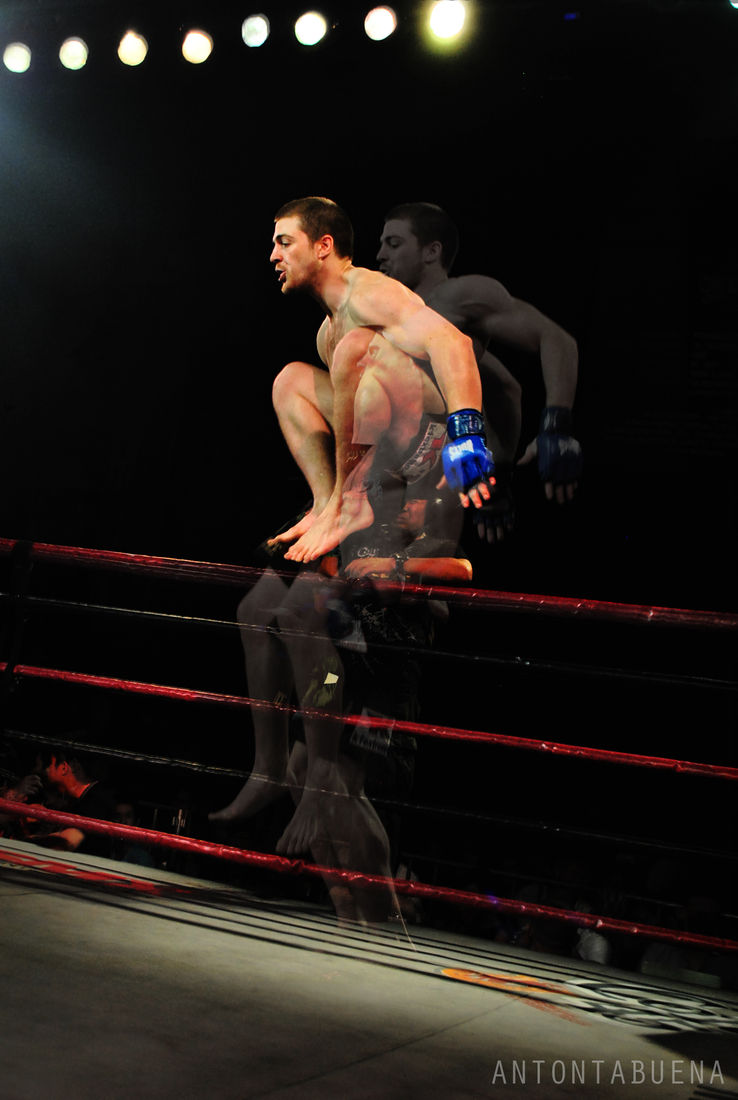 2. Nicholas Mann jumping around at URCC 21. Mann, the current URCC Light Heavyweight Champion, defeated URCC Middleweight Kingpin, Froilan Sarenas in a super-fight to which headlined the event. Right before the match started, he kept jumping up and down in his corner, so I decided to take a series of photos of it, and pieced them all together to produce this photo. 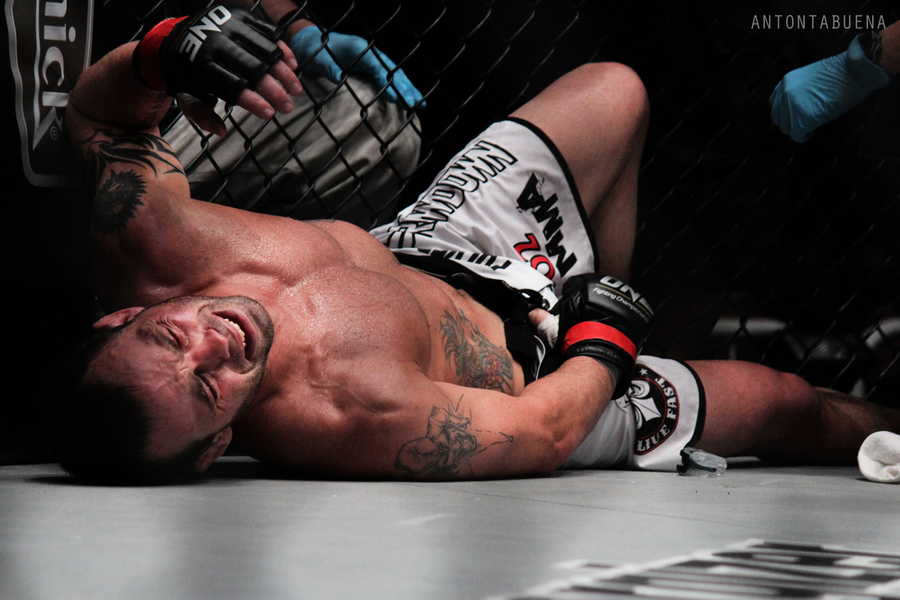 3. Jens Pulver, after taking a brutal kick to the groin. This was during ONE FC 5 in Manila, during the quarter finals of the ONE FC Bantamweight Grand Prix. After two entertaining rounds where he scrapped with Chinese prospect, Ya Fei Zhao, Pulver took one of the nastiest shots to the groin I've ever seen. Pulver was down for several minutes and was in such extreme pain, that he was even stretchered out of the cage. As he wasn't able to continue, the fight went to the judges scorecards, and Pulver was awarded the technical decision, advancing him to the semifinals of their BWGP. 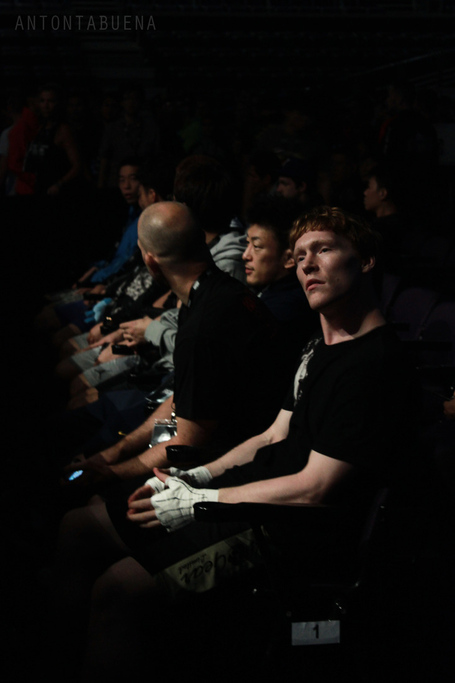 4. ONE FC 3 Fighter Briefing. This was in Singapore last March, hours before ONE FC 3 started. Guys like Richie Whitson, Tatsuya Kawajiri, and Heath Sims, were among the fighters and cornermen listening to the instructions from Matt Hume. 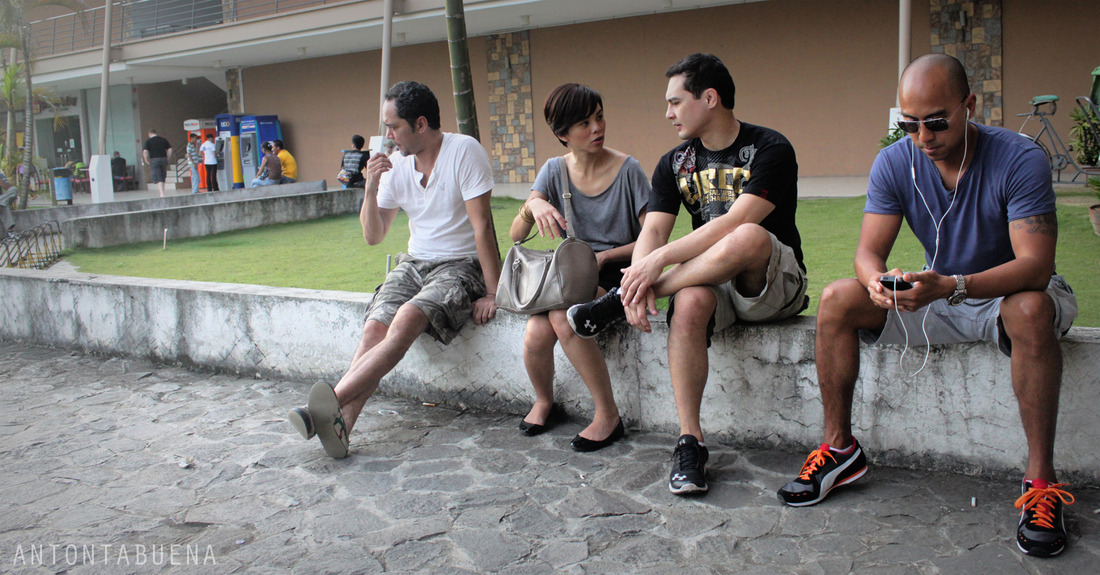 5. The Head Honchos of the URCC. This was taken last January, a few hours before the weigh-ins at URCC Cebu 7: Folayang vs. Teixeira, in the Philippines. Now this isn't really a photo that stands out at first glance. I did like it though, as it was a very casual moment in the province of Cebu, Philippines, where you wouldn't think that these guys were heads of the URCC, and the four top figures behind one of Asia's longest running promotions. 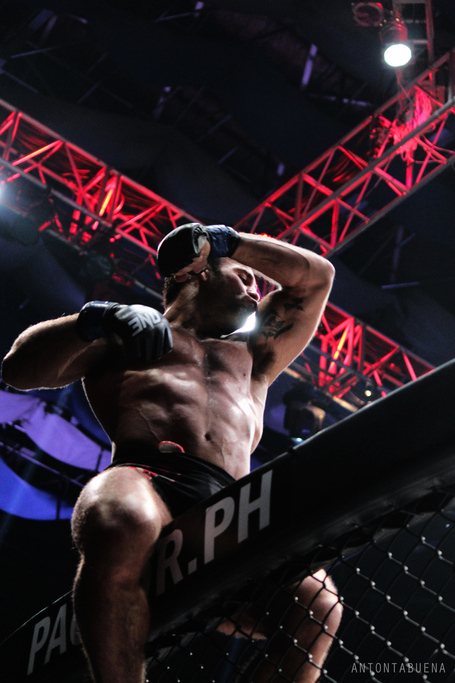 6. Phil Baroni celebrates his big win. This was at ONE FC 5 in Manila, last August, where the NYBA defied the odds and won with a brutal soccer kick beat down that stole the show that night. Following his win impressive over Rodrigo Ribeiro, the crowd went ballistic and Baroni celebrated in style, even giving one of the more memorable post-fight reactions and celebrations in recent memory. 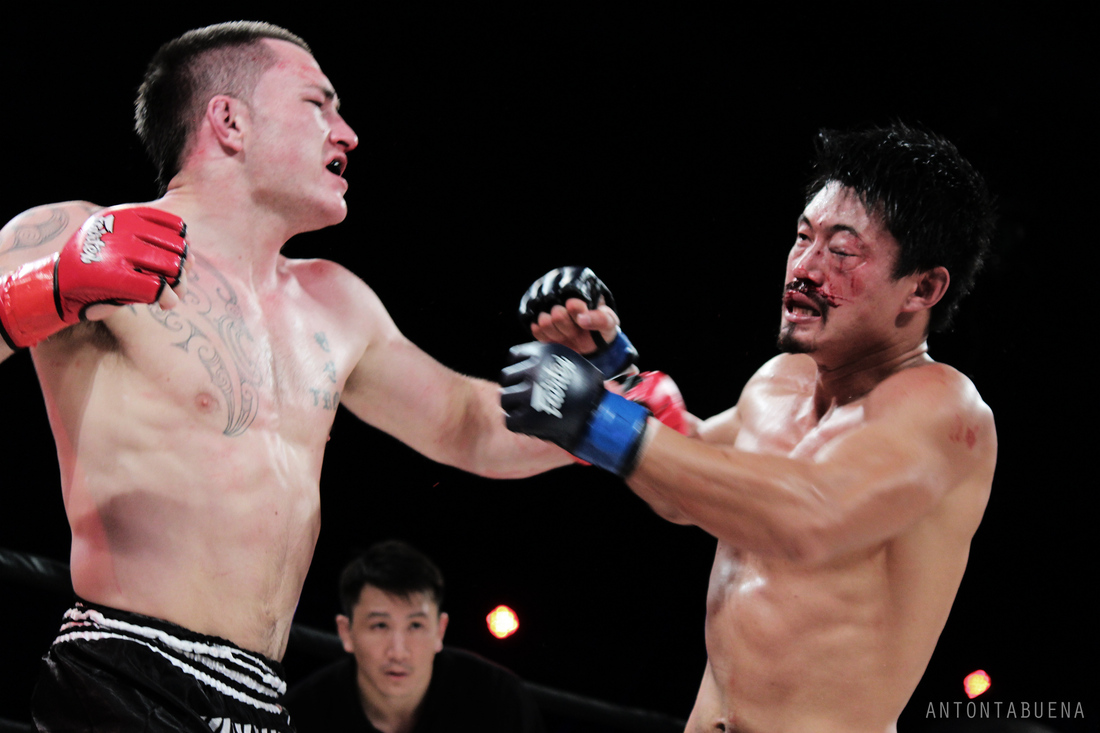 7. Luke Jumeau and Alex Niu putting on a brawl for the ages. Also on the Legend FC 10 card from Hong Kong was probably the most entertaining brawl this year, and likely the most exciting fight ever put on by the promotion. It's a shame that hardly anyone outside Asia saw it though, as Niu and Jumeau both brought it, and were constantly throwing and landing bombs at each other. They connected early and often, each taking the best shots they could muster with neither guy backing down. It may not have been the best strategy, but if was definitely a brutal ballet of violence which went on for 15-minutes. By the end of the fight, Alex Niu had both eyes almost swollen shut, as Luke had landed the more damaging shots to eventually win the decision. 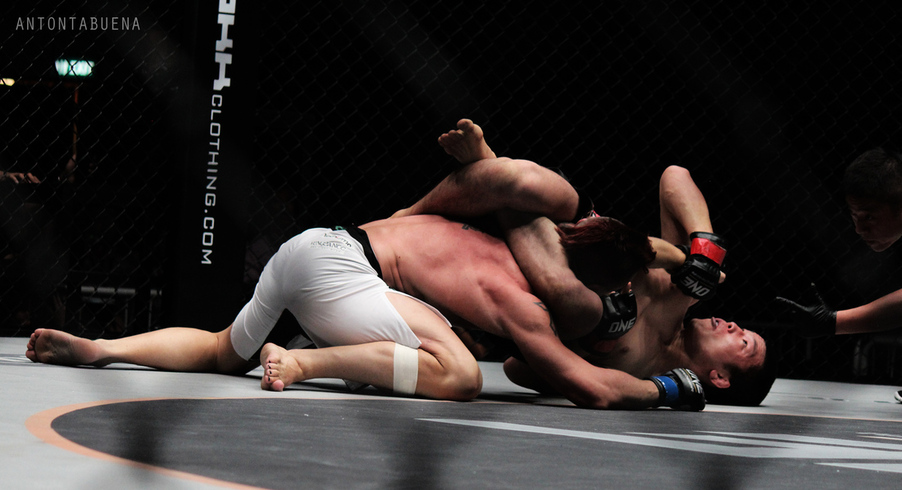 8. Shinya Aoki choking out Arnaud Lepont. During ONE FC 6 in Singapore, last October, Shinya Aoki signals to the referee that his opponent is already out. Lepont, who had several antics and talked quite a bit of trash during the lead up, got completely dominated on the ground. 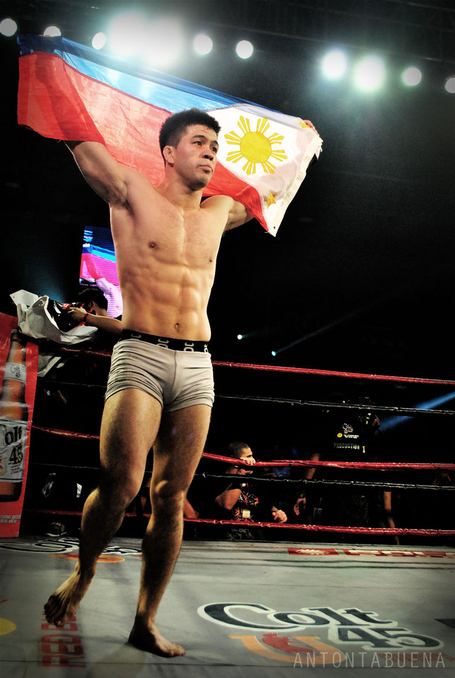 9. Mark Striegl celebrates after a dominant win. The young Filipino-American fighter in Striegl walked around with the Philippine flag after dispatching of his opponent at URCC 21. The talented grappler established himself as one of the top featherweights in the region as he went a perfect 6-0 in 2012, competing in promotions such as PXC, Legend FC, MFC, URCC, and DARE, to improve his overall record to 12-0. 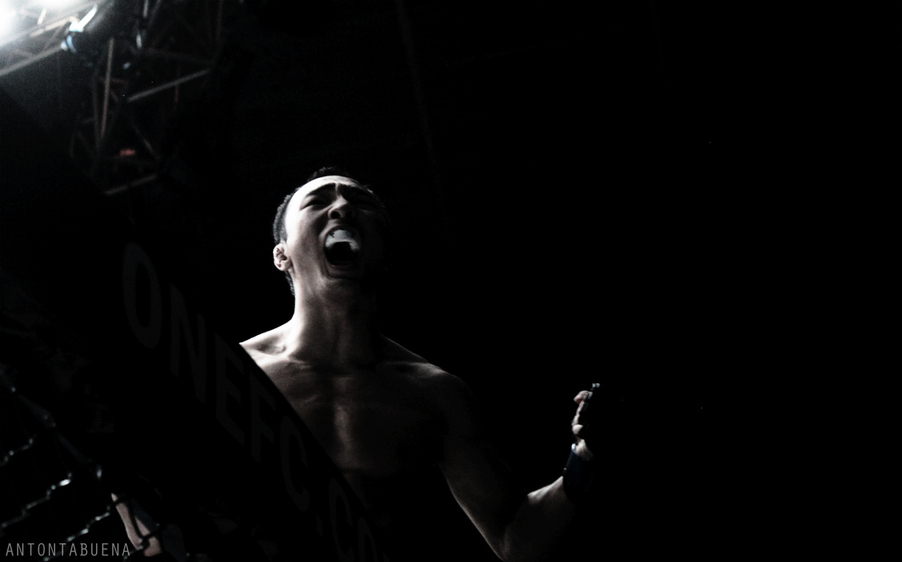 10. Soo Chul Kim wins ONE FC Bantamweight Title. At only 20 years old at the time, Kim has faced off against some tough competition, and was considered to be a top prospect for the future. When he faced the highly regarded BJJ Champ in Leandro Issa at ONE FC 6, not many gave him a chance as the Evolve MMA product has looked fantastic prior to the bout, and also holds a decision win over Kim on their first bout a year ago. That night though, Kim showed how fast he had improved his skillset and proved that he isn't just a prospect for the future -- that he in fact, is already a force today. Kim knocked out Issa in the 2nd to take the inaugural ONE FC bantamweight title, and the Korean became very emotional after, running up the cage and repeatedly screaming his lungs out, before tearing up a few moments later. 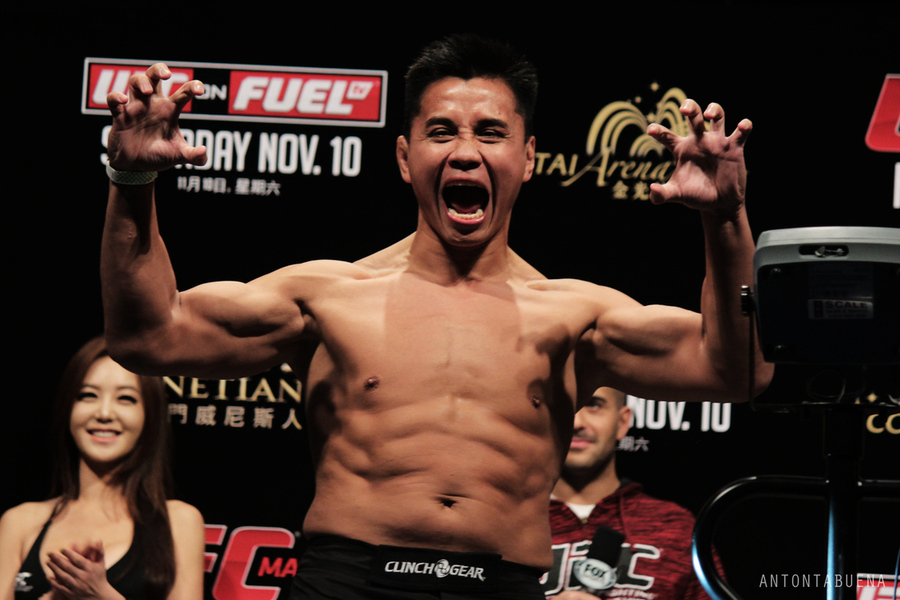 11. Cung Le poses during the UFC: Macau weigh-ins. This technically isn't from an Asian promotion, but it's from the Asian expansion of the world's biggest MMA promotion, which I covered for our fellow SBNation site, MMA Fighting. Cung Le headlined the first UFC event in Macau, China last November, and he struck this pose right after making the middleweight limit. Le went on to shock the world by knocking out Rich Franklin out cold. 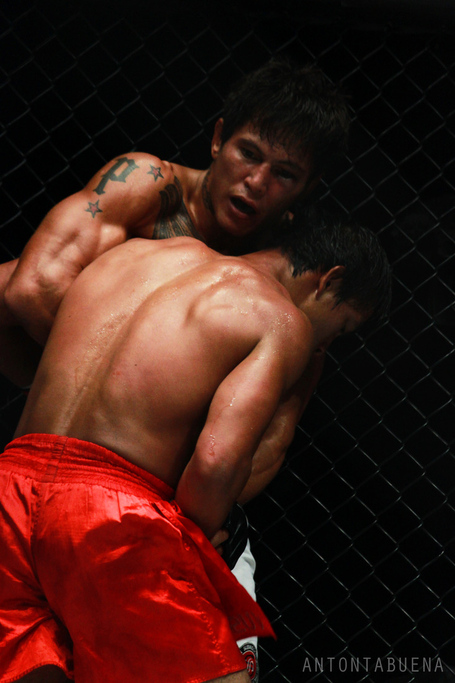 12. Ole Laursen vs. Eduard Folayang. I chose this more because of the moment this match brought at ONE FC 3 in Singapore. I would say it was probably the most entertaining bout ever put on by ONE FC. It became an instant classic as both fighters put on an all-out war for three rounds, leading to people calling it as the Asian version of Griffin vs. Bonnar. It was a joy to watch live, as two of the most entertaining fighters today put on a great display for the fans. 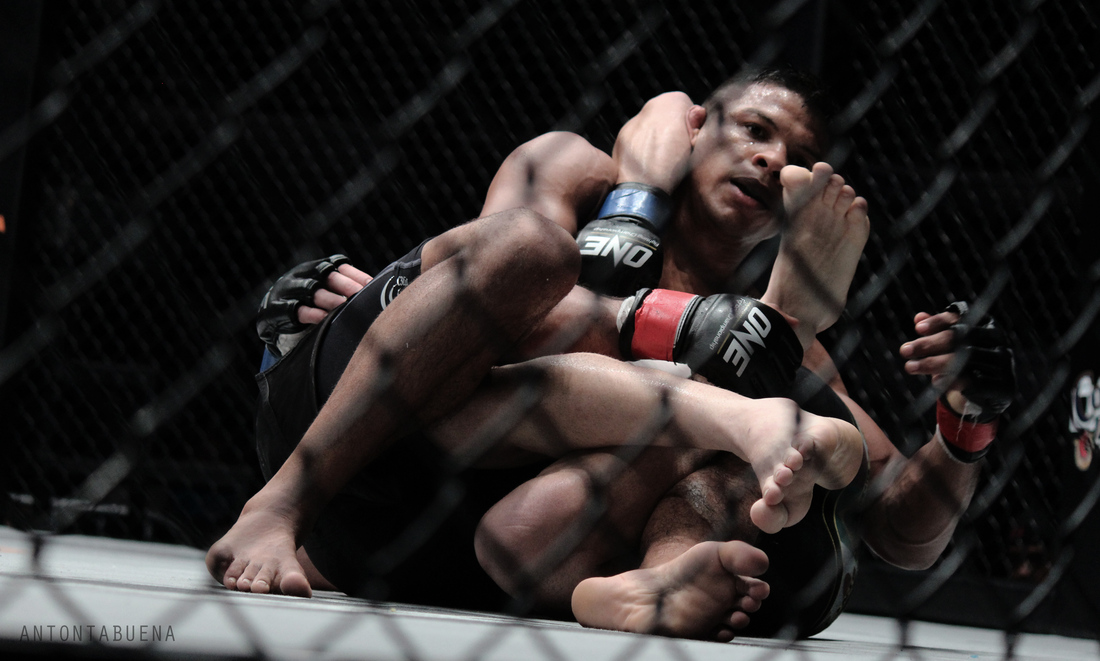 13. Bibiano Fernandes, Human Pretzel. Top ranked bantamweight, Bibiano Fernandes decided to decline the UFC's offer and instead sign with top Asian promotion, ONE FC this past year. He made his debut in Manila last August, against fellow BJJ star, Gustavo Falciroli. Both men were great on the ground and as shown on the photo, they got tangled up like a pretzel after some entertaining and technical grappling exchanges and scrambles. 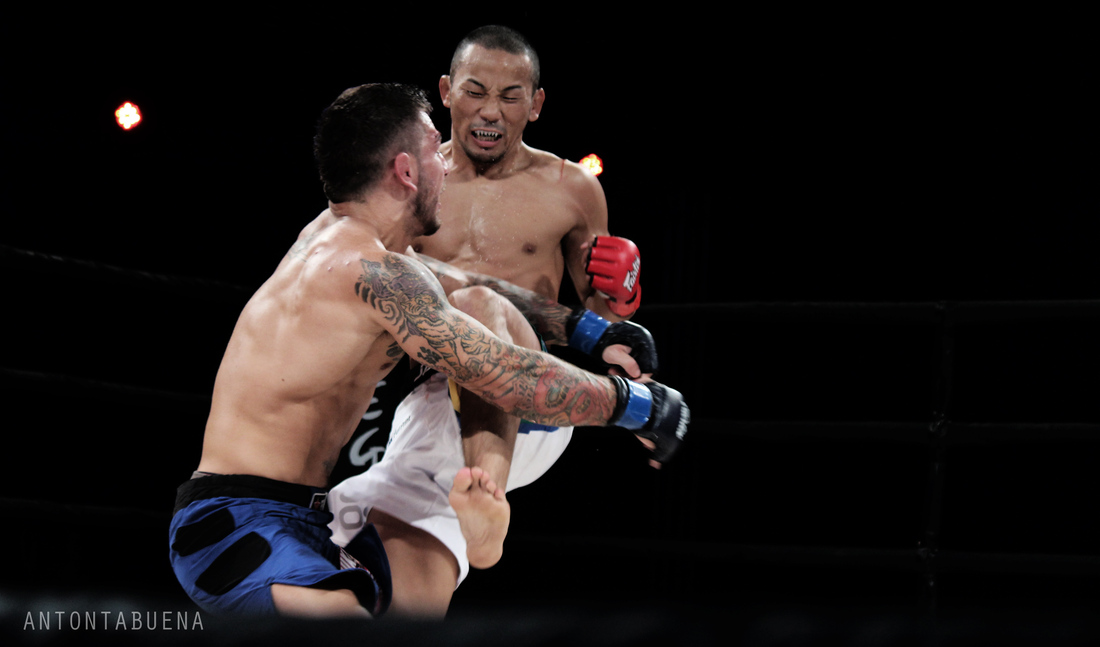 14. Yusuke Kawanago lands a flying knee, defends featherweight title. Also on that highly entertaining Legend FC 10 card, Yusuke "Bancho" Kawanago successfully defended his featherweight title against Rob Lisita. Pictured is one of the many well-timed flying knees that he landed to perfection during the fight. Also, while I do prefer MMA fights in a cage, I do enjoy taking photos more when the fights happen in rings. 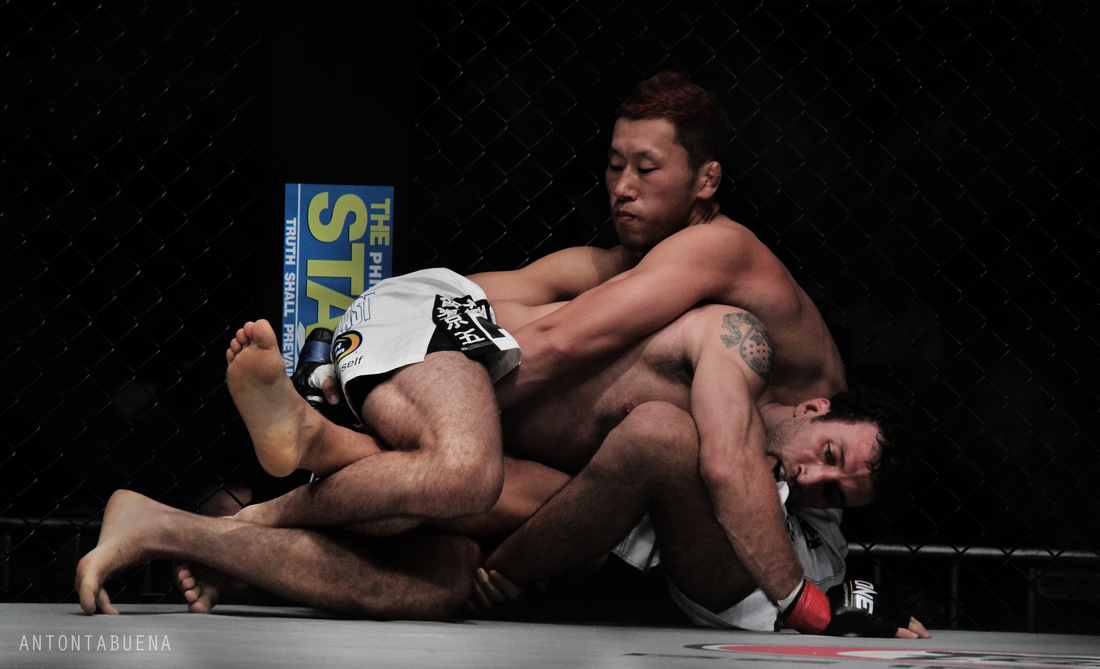 15. Jung Hwan Cha upsets Igor Gracie. On the ONE FC 5 card in Manila, Philippines, Korean prospect Jung Hwan Cha scored a huge upset, when he impressively defeated Gracie. The photo slightly tells the huge story of the match, where Jung remained calm and relaxed on the ground, while Igor Gracie seems frustrated and confused that he couldn't win the exchanges on the ground, which should've been 'his world'. 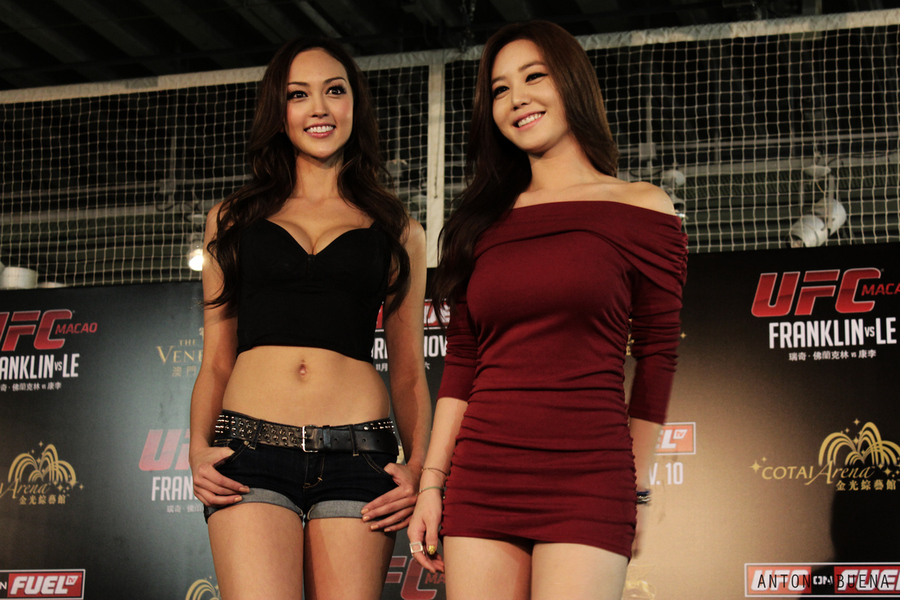 16. UFC: Macau Ring Girls. One of the more notable changes during the UFC's first trip to China this past year was the new guest ring girls they hired for the event. Jessica Cambensy, who was a part American, part Filipino-Chinese model based in Hong Kong, drew a lot of attention along with Korean actress, Kang Ye-Bin during fight week in China. 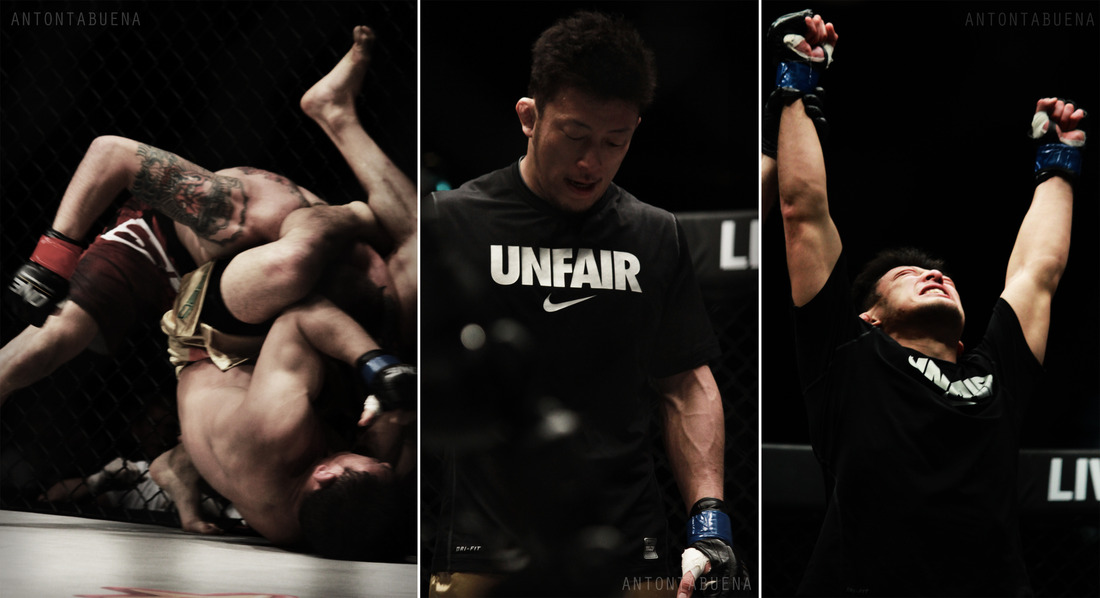 17. Tatsuya Kawajiri, Unfair. Following the slow death of MMA in his home country, Japanese star Tatsuya Kawajiri made his ONE FC debut early on the year, in Singapore. He took on KOTC champ, Donald Sanchez, and he didn't even make it look remotely competitive. He dominated the American on the ground, choked him out, and made the fight look exactly like what his Nike sponsored shirt says. 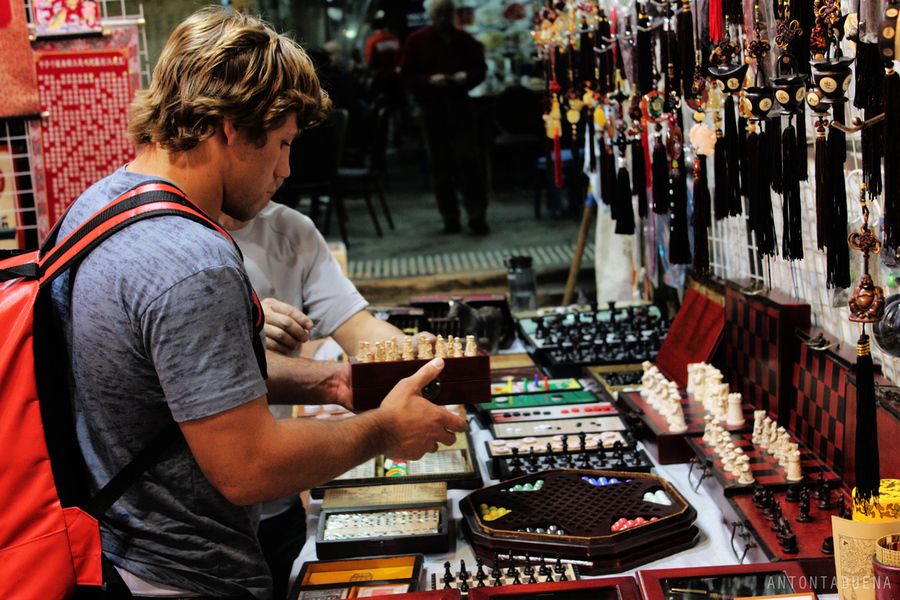 18. Urijah Faber shopping on the streets of Hong Kong. This is not really a fight event, but when the California Kid went to China during host events during fight week at UFC on FUEL 6, he made the most of the trip, touring the streets of Hong Kong and Macau extensively. On the photo above, Faber haggles and purchases a Chinese themed chess-set as he made a lengthy shopping trip, going around all the street vendors in the area. 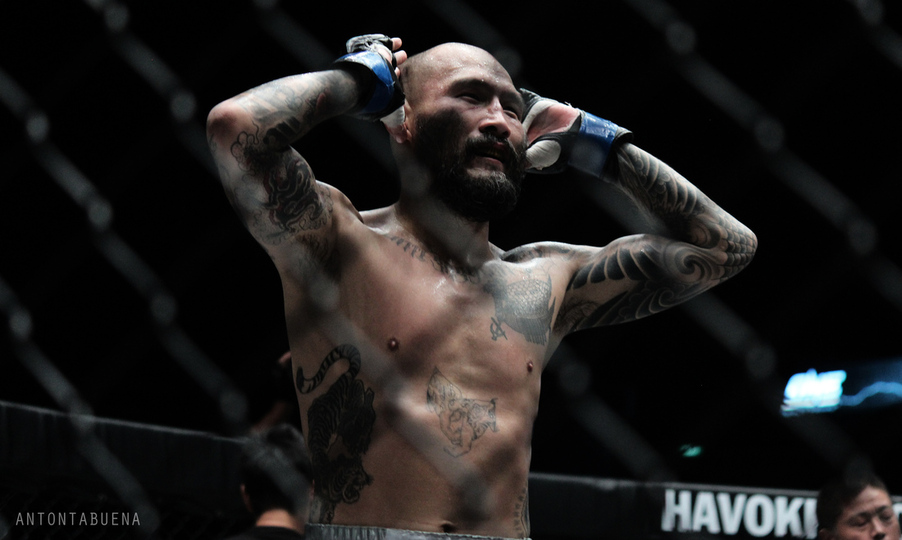 19. Kotetsu Boku silences crowd after impressive comeback. Kotetsu "No Face" Boku fought for the inaugural ONE FC lightweight title last October, against the highly regarded fighter in Zorobabel Moreira. The Evolve MMA product has been on a devastating streak prior to the contest, and many thought that the Japanese fighter wouldn't have much of a chance against the 6-foot-3 lightweight. It looked that way for most of the fight too, but after several rounds of taking a beating, and while limping on one leg, Boku was able to land a big punch that turned the tide. He managed to secure a huge upset, and pictured above is his reaction as he left the partisan crowd shocked to see their adopted hero fall after such a dominant performance. It was an excellent moment, and one that won't be soon forgotten by Asian MMA fans. 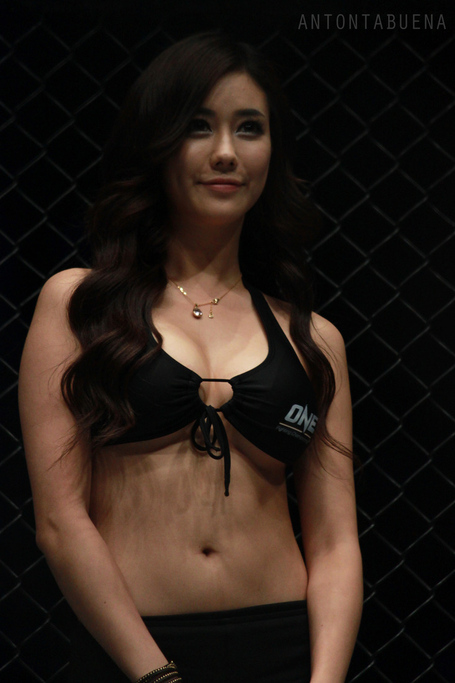 20. Kim. Ha. Yul. It's not exactly a special photo artistically, but does anyone really care? As a bonus photo, I had to include Kim Ha Yul, who is a ring girl for both Road FC and ONE FC... and I have to say, that she (along with Jessica C.) would make a better combination than the ones we're used to seeing.

Well That's it for my favorite Asian MMA photos of the past year, so here's to an even better 2013.