Lloyd Irvin purchases LloydIrvinRape.com, turns it into a marketing site

Following the accusation of two students at his gym raping a third female student and a revival of interest in a 1989 rape case, Lloyd Irvin has purchased the domain LloydIrvinRape.com and is seeming to view this time as a marketing opportunity.

Share All sharing options for: Lloyd Irvin purchases LloydIrvinRape.com, turns it into a marketing site

While noted BJJ and MMA trainer Lloyd Irvin has not responded to inquiries and an article here at Bloody Elbow that he may have been the same Lloyd Irvin charged in a 1989 gang rape of a 17 year old, he has been busy with other things. Around the time the news was set to break that two of Irvin's male students were being charged with the rape of one of his female students Irvin was very active in posting videos about an upcoming rape prevention seminar. Some people found the opportunistic marketing somewhat questionable at that time, but Lloyd has gone a little further with that marketing strategy now.

Irvin purchased the domain LloydIrvinRape.com yesterday as the story of the 1989 case was gaining steam. Here's a photo of the WhoIS entry with the purchase information, captured by Sherdog member LS1Rx7: 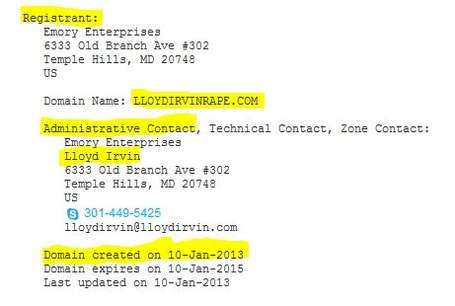 I have no problem saying that turning attention on a rape case involving two of your students with a third as the victim and attention on an old gang rape case into a marketing event is in poor taste - at the very least.

Irvin also released a press release yesterday on PRWeb.com about his February 2 rape prevention seminar. PRWeb's website describes what they do on their site by saying "Each release is optimized to help you get the best organic search results. PRWeb also distributes your news to premium online outlets, and is sent directly to journalists and bloggers so you can be found all around the web - critical in achieving greater visibility, generating publicity and driving potential buyers back to your business."

It's important to note that the seminars are free.

The release being sent out gets picked up by some media outlets which repost press releases, like Fox 8 out of New Orleans whose repost of the press release is now one of the top Google results for phrases like "Lloyd Irvin Rape." The timing of the videos, the wording and timing of the press release, the domain purchase. Those are all pretty standard search engine optimization tactics to try to control results on Google for certain phrases.

Nothing he is doing here is illegal by any means, but it is a bit offensive. When a young woman is dealing with allegedly being raped by two men she knew from Irvin's gym, Irvin began marketing his own rape prevention classes, turning her horrible ordeal into a business opportunity. Now, with questions about the '89 case and if he is the same Irvin charged in that gang rape case, Lloyd is deleting any mention of it on his Facebook page, refusing to answer inquiries from the public as well as media and appearing to going so far as to deactivate his Facebook profiles whenever he is not around. All of this while also purchasing a domain and putting out press releases in an attempt to capitalize on anyone searching for details on either case.

It's likely the domain purchase is a defensive move. Irvin is an internet marketing expert and knows that if he can flood Google with sites under his control that come up when the term "Lloyd Irvin rape" is searched for it will minimize the chances of people finding something negative about him or his team when they make that search.

Update: The page has been changed. The advertising materials are gone. It's now just the basic hosting page.