Two Lloyd Irvin students have been accused of rape for an incident with a female student on New Years Eve. However, it appears that a little known 1989 gang rape case may possibly have involved Lloyd Irvin himself.

When the story of two male Lloyd Irvin students being charged with the rape of a female student came out yesterday, news reports of 1989 gang rape case involving a Lloyd E. Irvin, Jr. also surfaced. The charge was that a 17 year old woman went out to dinner with a group of male college students, went back to their apartment, had a few drinks and then was raped by "at least seven men."

The men claimed that the woman was a willing participant in the incident.

Here are some of the details via the Daily Press:

The fates of two men charged in the alleged gang rape of a 17-year-old Hampton University student last fall will not be determined until at least Monday.

Circuit Judge Robert W. Curran dismissed a jury of six men and six women at 7 p.m. Friday after they deliberated about four hours on whether Terrence C. Gatling, 21, and Lloyd E. Irvin Jr., 20, are guilty of rape.

Irvin said that having sex with a "freak" was not one of his best ideas of fun, but he did not oppose it.

Irvin wasn't convicted because he was "impotent" according to a follow-up Daily Press article:

On that evening a 17-year-old girl agreed to go to dinner with a group of male college students she barely knew. Then she agreed to go to an apartment with them for a party. Somewhere along the line she drank some booze.

By the end of the night, at least seven men had had sex with her. Neither Gatling, who is 21, nor Irvin, who is 20, tried to talk any of them out of it. Instead, they joined in. Or tried.

Irvin was saved by the fact that the jury believed he was impotent when it was his turn.

The article goes on to say that Irvin testified that Irvin "wanted to have intercourse with her but couldn't." In the end the accusation that Gatling held her down while Irvin had sex with her led to Gatling only being convicted of forcing the woman to perform oral sex, since the jury believed the story that Irvin was, as the paper put it, impotent.

Lloyd Irvin the MMA trainer's full name is Lloyd Emory Irvin, Jr. He was born May 17, 1969 which would have made him 20-years-old at the time of the incident and he did, in fact, attend Bowie State University. He has trained such notable UFC stars such as Brandon Vera, Mike Easton, Phil Davis and bantamweight champion Dominick Cruz.

In 1991 there were two more men involved in the same gang rape who were convicted.

Obviously the charges in this 1989 case were of a very serious nature and, should it turn out that this is the same Lloyd Irvin it may raise questions about public disclosure (even though not found guilty) as he now teaches "rape prevention seminars," such as the one currently scheduled for February 2.

Efforts to verify the identity of the accused have been unsuccessful.

The Newport News police department, as well as the Courthouse, were unable to verify that these are the same Lloyd E Irvin Jr. They do not have records from more than ten years ago on file at the courthouse, and the police have limited data in their records and can only verify an arrest, not the extent of the charges. Bowie State University was unable to confirm if there was only one student by the name of Lloyd E. Irvin Jr. who attended the school in 1989, because they can not give out those details.

Attempts to reach Irvin via phone or Facebook were unsuccessful. The person who answered the phone at his gym said he was unavailable and a request for a return phone call has gone unanswered, while Facebook messages were not returned. It appears he has deactivated his personal and business Facebook accounts since that communication was sent.

Prior to the closing of his Facebook page, Irvin had posted this update about the current charges involving his students:

There has been a horrible alleged incident that occurred that involved 3 people on my comp team. This is a legal matter that I am not authorized to speak on and has nothing to do with me personally. However, for you idiotic people who come on my page to attack me for the actions of two grown men, let me make something very clear to you:

I don’t care if you hate me, my marketing, my team or anything I do, but let’s not lose sight of the REAL issue here. A young lady was allegedly harmed. Someone who is a friend, a student of mine and who knows she has my full support during this difficult time.

This is not a laughing matter or a time to try and turn your personal dislike for me or my team into an irrelevant story.The focus should be on the well-being of this young lady. Do not take away from the severity of these charges by trying to make it about me. This could be any one of our mother’s, sisters or daughters and I take this very seriously

For the record I was just with this young lady this morning and she is looking forward to working towards her goal of becoming a bjj world champion. Anyone that attempts to come on my page and attack me during this serious time is beyond sick!

Update: Lloyd's Facebook page is once again active, though yesterday's post about the alleged incident with his students appears to have been removed.

Update 2: Some people have been asking about the situation on the Facebook page, but those questions are being deleted. 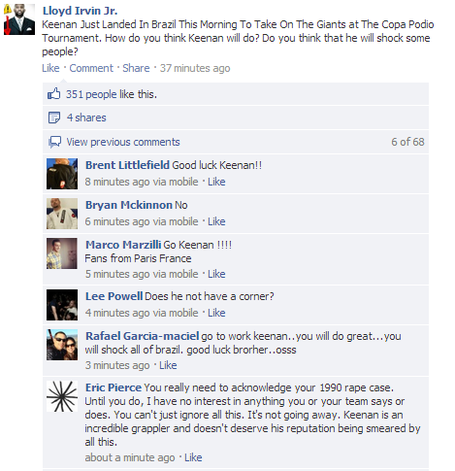 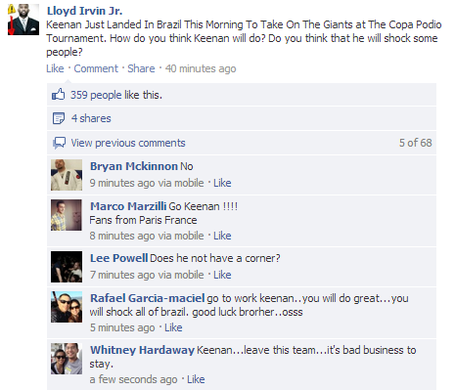