Late last night, UFC veteran and MMA legend, Renzo Gracie sent out a bunch of twitter updates detailing his night as he 'dealt' with 2 alleged muggers at the streets of New York City. According to the 6th degree BJJ Black Belt, 2 men started following him for a few blocks at roughly around 3 a.m. ET, and things didn't end up well for them.

In a nutshell, Gracie eventually decided to take out both guys, while live tweeting about it at the same time.

I'm not sure what's more interesting, that two guys decided to target a life long martial artist, or Renzo taking them out while simultaneously tweeting about it. Check out how everything unfolded according to his twitter feed:

22nd street and 10th ave right now two guys following me, can't help but have a big smile upon my face Im talking about a happy one ;-))))

Waiting for them... Are they really thinking I'm drunk??? They have to be kidding. Hahahaha

I just stop to take a pic, they pretend they are looking at the window, can't lie... My blood runs in a different speed, man I miss Brazil

Please hold there for just a couple minutes ;-) be right back

They are coming closer, asking for a cigaret ;-) lol can't help but have a smile in my face. I don't smoke. Pretend to wobble. They smile

Renzo stops tweeting for about 20 minutes, and that's apparently when things started to escalate. Read everything after the jump.

My hands hurt... Can't help but look at him the other one took off running, not much of a friend. Chicken :-/ I can still see him, he looks Back as he runs, no chance to catch him... Even though I began to try to run after him, I realize How slow I was. Fuck it :-///

This one asks me why did I do that, pretending to be stupid, one little kick to the ribs makes him whine and apologize, as I'm writing this.

I ask him if he was planing to rob me, he says no. All he wanted was a cigarette, lol I can't help but have a big smile upon my face, and .. The certainty that if it was an ordinary man he would be sad about his stolen goods. Fucking cunt cries like a bitch when the tide turns..

I can't help but take a pic as his nose bleeds and he wines and asks why did I do that... Like he doesn't know the reason... 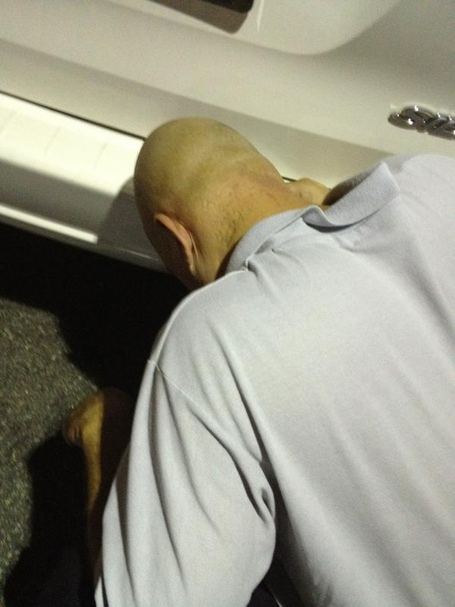 Drove around two blocks... The other fellow disappear, I'm heading home... Angry for not finding the second one. Guess no sleeping tonight.

There is basic things like you don't come back to where the problem was.. You just don't, I knew he would, just going around the block would Be enough... Dumb f%#^ I just gave him the old style Raccoon, it has been a while since the last time I did.. Choke him out 3 times...

And before he woke up I did hit each eye socket at least twice, tomorrow he will wake up like a raccoon, and every time he woke up I was... Whispering at his ears.. That's what death feels like it.. Don't do that again. My fucking hand hurts, :-/ a lot

Next time I will use only the elbows, damn I miss that feeling, sometimes I wonder if the easy life has been making me Soft.. All those years in Brazil, without knowing if I would make it home had to count for something, I can't lie I could have jump in a cab But I could not help, I could spot them from a mile away, walking was my option, thank you mayor Giuliani, nobody carries a gun in our... Beautiful state, my lucky day, their bad day... My hand hurts and @FrankieEdgar is here at 9:30am for some training, shoot damn little guy 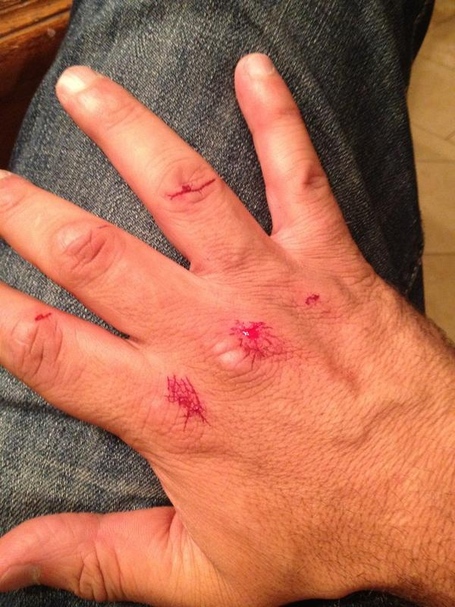 Could not take a second pic guys sorry, believe I try, as I reach for my iPhone he almost took off :-/ fast mofo

MMA vs. Crime: Stories and videos of MMA training being used against suspected criminals