Share All sharing options for: UFC 152 Judo Chop: The Weaknesses Of Vitor Belfort

Due to the positive response I receive every time I write a "weaknesses" piece, I decided that this time I would start with the weaknesses of Vitor Belfort and write about the strengths of The Phenom afterwards. It perhaps reflects the ludicrous betting lines for this fight that even though I want to believe that anything can happen, it is far easier for me to demonstrate Belfort's weaknesses than it is for me to demonstrate his strengths.

Vitor Belfort debuted in the 1990s and acquired the nickname "The Phenom" for his hand speed and punching power, but throughout his career perhaps a better nickname would have been "The Enigma". For over 5 years of terrible performances fans continued to say "I hope OLD Vitor shows up". As soon as Belfort picked up a win over Matt Lindland it seemed like "Old Vitor" was back but in truth things just became more confusing as a man who was continually ranked by fans as number 2 in the middleweight division ended up fighting sub top 10 fighters such as Yoshihiro Akiyama and Anthony Johnson.

In today's Judo Chop we will examine Belfort's:

- The Difficulty in Ranking Vitor

Vitor Belfort came into the sport at a time when Tank Abbott was considered one of the sport's best strikers, and proceeded to flatten men like Abbott, Scott Ferozo and even the young Wanderlei Silva. Having trained boxing all of his life, Belfort was thought to be an elite level boxer by MMA standards, but in truth Belfort never showed a great deal of boxing skill, simply power and speed. Take a look at any Vitor Belfort highlight and you will notice that aside from the occasional straight left (as a southpaw that is the correct technique for Vitor to lead with), Belfort's assault consists entirely of throwing one hand at his opponent's head while the other is loaded at his shoulder or down by his nipple. Vitor never changes target and rarely even changes the direction of the punch to an uppercut or even an overhand, he simply pumps straights over and over until his opponent falls over or clinches him.

In recent years Vitor's output has become a little more varied, he has added uppercuts, hooks and even knees to his arsenal, but he is still exclusively a head hunter. The truth is that Vitor still gets by almost exclusively on his speed in flurries, not on set ups or combinations. Combinations and set ups are sequences which are intended to land punches through forcing the opponent into a position or defence, a flurry is just throwing punches repeatedly at the same spot and that is what Vitor does.

One of the reasons that Chuck Liddell was able to drop Vitor Belfort was that Vitor continues to run straight in, swinging punches faster than his opponent in hopes of knocking them out. When Vitor ran in flurrying, Liddell pivoted to a different location, Belfort chased him, ended up almost chest to chest and got caught with Chuck's shots as the latter fired back. This is a brilliant example of Belfort's aggression working against him (more of those to come). (G)

Vitor's one dimensional pugilistic assault which lacks much science and instead relies on speed and brute strength is the cause of many of the other weaknesses we will touch on today.

Vitor has never liked the act of kicking or become accustomed to defending kicks. Throughout his career Vitor has eaten kicks from the most unlikely kickers simply because they have worked out that Vitor is going to attempt to slug with them almost exclusively. Beginning with Kazushi Sakuraba, on to Chuck Liddell, and eventually to Anderson Silva whose kicking prowess allowed him to knock Vitor out where the other two men simply beat him up at range.

If you have never seen Kazushi Sakuraba versus Vitor Belfort I highly recommend watching it - it will make you realise why Sakuraba was pound for pound number 1 in the world for such a long time. Giving up 25 lbs to Belfort, Sakuraba weathered an early Vitor flurry and went on to beat up a disheartened Belfort on the feet with spinning back kicks, low kicks and the occasional surprisingly hard punch. After the first spinning back kick that Sakuraba landed Vitor immediately flopped to his back and chose to play guard, and this pattern was repeated every time Belfort stood up, failed to get into range to punch Sakuraba, and got kicked. 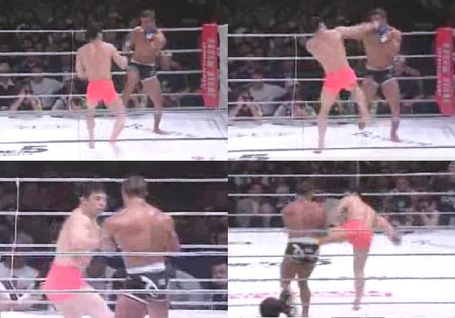 Notice here how Sakuraba messes with Vitor Belfort's reactions to land strikes. In the top two frames Sakuraba fakes one of his hard low kicks with his right leg, Vitor over-reacts by picking his leg up very high, and Sakuraba instead punches him with his right hand while they are both on one leg. In the bottom two stills you can see one of the several occasions that Sakuraba landed his spinning back kick. As Vitor circled to his own left, Sakuraba switched to southpaw and spun so that Vitor travelled into the kick's path. If they were boxing Vitor would be safe circling away at this range, but the allowance of kicks in MMA means that for a large portion of the match at range (especially when he is tired from a failed first round flurry), Vitor is a sitting duck for kicks.

Chuck Liddell also demonstrated the spinning back kick on Belfort, despite normally being quite kicking averse. The simple truth is that Vitor spends his entire career stood inside of kicking range and being unable to do anything until he runs in close enough to punch. Against Sakuraba it lost him a decision but against Anderson Silva it got him kicked in the jaw while he was attempting to keep up with where Silva would kick. Watch one of the many slow motion gifs and notice how Belfort is raising his leg to check a kick as he is kicked in the face. (G)

Vitor's discomfort at kicking range will cost him against Jon Jones (if the fight goes past the opening minute) who simply loves to grind men down with long, Semmy Schilt-esque snap kicks to the body and round kicks to the legs and head. Jones has also shown himself to be a fan of Vitor's old nemesis, the spinning back kick.

Take another look at that Vitor Belfort highlight at the top of the page - or at any Vitor Belfort highlight - and notice how Vitor always ends up fighting off his opponent's clinch as he flurries on them. I have already observed how Belfort doesn't fight in the style of a classical boxer, but rather runs in flurrying. In truth a great many of Belfort's fights have been won by out muscling his opponent's at clinching range. 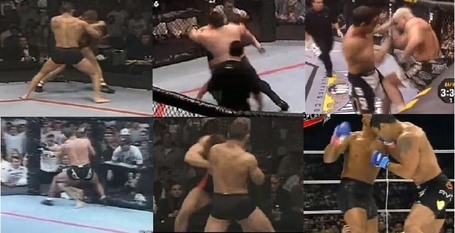 Far from the great boxer he is credited as, Belfort's best work often comes when his opponent's are trying to clinch him and he is simply muscling them off of him and flurrying. All of the above shots were taken from moments in the above Vitor highlight where Vitor was clearly doing what he does best, flurrying on opponents, and all of them are almost chest to chest.

The idea that Vitor is going to get inside, hit Jon Jones and use his head movement to evade Jones' punches and elbows is a little far fetched. In fact the idea that Vitor Belfort is a great technical striker is a myth, his bread and butter is chest to chest brawling. In every single still above Belfort has run in with a flurry and is continuing to punch with his hands down by his nipples and his head bolt upright. His opponents try to clinch him and he shrugs them off. There is no boxing science to it, just speed and strength.

A quick look at Belfort's fights with Randy Couture will tell you why Jon Jones is a terrible match up even if Belfort does exactly what he wants to. Randy Couture let Belfort run at him, then Randy would duck into the clinch, beat Vitor up and take him down. Rinse and repeat - for three fights. Even in the second fight (which is bizarrely featured in the highlight above) when Vitor succeeded in cutting Couture's eye with a grazing counter, he was immediately tied up afterward. Belfort's assaults only work against men whom he has already hurt and men who lack the experience and ability to tie him up. 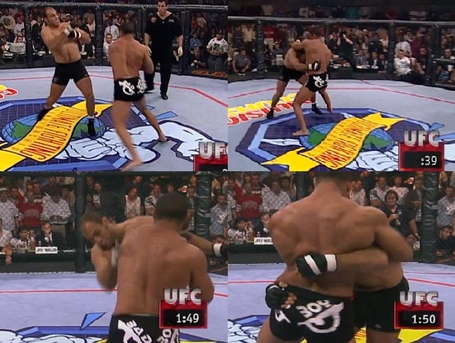 Couture himself said that Vitor was an incredible physical specimen but that he was not a great boxer in that he was predictable - you knew he was going to run in with straight punches and try to flurry. Every time Vitor ran in with punches, Couture tied him up and beat him down in the clinch - just as in the stills above.

Vitor Belfort is still not hard to tie up, a gassed Anthony Johnson got him down with ease and it took some very shady stand ups to stop Rumble from stalling to the end of the round.

The Difficulty in Ranking Vitor

One of the reasons that there is so much confusion around Vitor - many people still insist he is the second best striker at middleweight for instance - is that he gets given some bizarre fights. It is very hard to place Vitor Belfort in the middleweight division or any division with the run of opponents he has had:

We never get to see Vitor fight contenders such as Chael Sonnen, Mark Munoz, Chris Weidman, Michael Bisping, Alan Belcher, or even men such as Rousimar Palhares or Demian Maia. Instead he gets fights against opponents who are clearly below him. Why? Probably because Belfort is a big brand. He has enormous knockout power and star value to match in Brazil.

Watching Vitor starch low ranked fighters such as Akiyama or a washed up Wanderlei Silva is worth more to his brand than watching him get laid on by Chael Sonnen or one of the other less exciting but actually relevant fighters in the middleweight division. Vitor's ranking by most fans is almost entirely hypothetical based on what they think he would do to the contenders. It is truly bizarre to hear in forums fans say "Vitor would DESTROY Sonnen / Bisping / Weidman / etc", and for some reason that is the end of the discussion. It seems to be almost taboo to ask why the supposed second best middleweight in the world has never fought the other top ten fighters.

Against Jon Jones, Vitor Belfort is once again fighting the divisional number one without earning his place there - and once again we will come out of the fight with no better sense of how to rank him.

Next time we will look at Belfort's strengths and I'll show some of the ways that Vitor breaks up the run in and flurry pattern.