Ladies and Gentlemen of BE,

Today we awoke to a message telling us that SBNation was down. Like many people (I assume) I knew that this meant the changes were coming, and prepared myself to be wow'd when I walked into work (where I spend more time on BE then I should). So I sat down at my desk, loaded up my old dell that runs Windows 2010 (Upgraded two weeks ago!) and still runs on IE 8 (also upgraded two weeks ago!) and logged onto BE. What I found could only be described as a clusterfuck.

Unlike others, I didn't freak out at first. I sent an email to support, let them know what my issue was and actually got a very fast response that they knew about it and were working on it. Awesome. Bugs happen and while you could argue that it should have been sorted out before final release, sometimes these things don't show until its live.

Now over the course of the day, MANY people voiced their displeasure with the new format. I was still kind of lost because I knew I wasn't seeing that actual format, just the broken IE one. It seemed that while few people had legit complaints (IE users like Shnak and myself, some mobile app users and some other stuff) most of it revolved around "I don't want to click more then I should" and "I think its ugly" which are both petty complaints.

So fast forward to 5pm when I get home and get on chrome. I didn't even change out of my work clothes, I just went onto BE to see what this page really looked like....and my god it was beautiful. 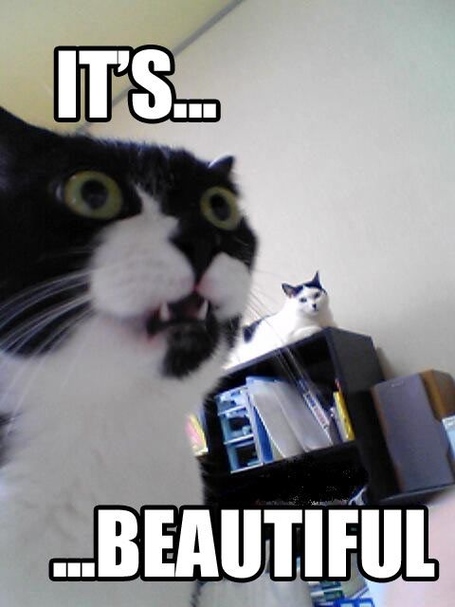 Anyone who can sit here and say that this site isn't more aesthetically pleasing is off their rockers. The old version of BE - while simple - really just amounted to story on top of story and if it got too many comments it took forever to load. That also seems to have changed, judging by the massive fanpost that (at least for me) loads much quicker.

I've taken some time to really browse the different sections, and I must say the fanpost section really is much better. Forcing users to go to a "fanpost" page will make sure that people see more articles. That's a good thing. Lastly, I understand this format makes it much easier for the staff, who mostly do this for free. Without them, there wouldn't be a BE for users to browse.

So take a few days, try and get used to the format and if you legitimately have gripes then I urge you to contact any of the staff. I have found that they are really helpful if you aren't rude. I love this community because we are all rational people...so let's be rational about this.