Almost every MMA fan has heard of the Kimura arm lock, and many fans know the famous grappling match between Helio Gracie and Masahiko Kumura that was the genesis of the naming of the submission. But so few MMA fans know the man behind the shoulder crank, and understand he was so much more than the man who broke Helio's arm.

Share All sharing options for: Gods of War: Masahiko Kimura

A natural athlete, Kimura would have a meteoric rise in Judo due both to his amazing physical gifts and a burning desire to be the very best. In Judo circles Kimura is remember most for his unmatched work ethic and punishing workouts.

Born on September 10, 1917 in the Japanese city Kumamoto, Kimura would begin training in Judo at age nine. The boy was not just a natural, he was a prodigy achieving the rank of 4th dan (degree) black belt by the age of 15. In 1935, at age 18 he was the youngest Judoka ever to reach the rank of 5th dan black belt after entering in the Kodokan's yearly Red and White Tournament and winning eight matches before he was defeated a man named Miyajima.

Then in the summer of 1935 Kimura entered in the 5th dan championships. In his first match Kimura was beaten by Kenichiro Osawa, who threw the young Kimura so hard he suffered a concussion. In his second match Kimura lost a close match with Kenshiro Abe, who then went on to win the championship. Kimura would lose one more match in the fall of 1935.

Kimura was so angry at his failures he considered quitting judo, instead he refocused his efforts and would become possibly the greatest Judoka in the history of the art. These four losses, suffered at the age of 18, would be Kimura's only losses in competitive Judo.

Kimura redoubled his efforts in training and vowed he would avenge his losses. He continued to sharpen his skills and became extremely proficient at the O Soto Gari outside trip. The fall from this trip was so hard that often his sparring partners began to request that he limit his use of the technique to protect themselves from injury. Kimura would rematch with Osawa at a Police tournament and defeat him easily. Next was Abe, who Kimura sparred with in a class and threw him many times in front a whole academy of Judokas.

Kimura won his first two matches with ease, using his now famous O Soto Gari. In the finals he was faced with two time champion Masayuki Nakajima. The two were tied going into the final period until Kimura took Nakajima down and used Kuzure-Kamishiho-Gatame, a north south pin, to win the championship. 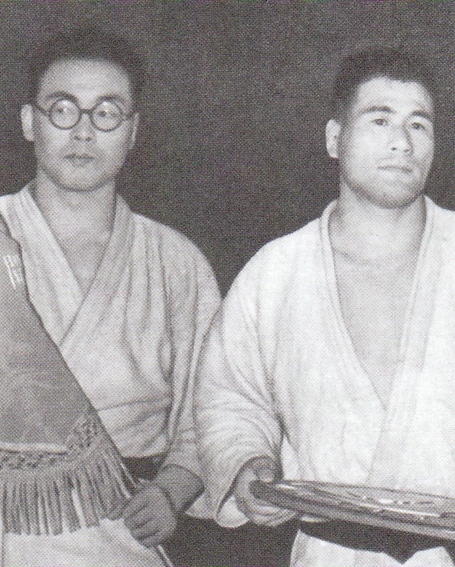 Kimura repeated as champion in 1938 and 1939. After winning the championship for the third time he was presented with an award known as the Championship Flag and is the only man to be awarded that honor. In 1940 Kimura was invited to compete in the Ten-Ran, a special tournament held by the Japanese Emperor. Kimura won a tournament of 32 of the best professionals in Japan and was presented with a special gift from the Emperor.

In 1951, Kimura traveled to Brazil along with Yukio Kato, who had accepted a challenge match with a Brazilian trained in Judo, Helio Gracie. The rules for the match were set by Gracie, the match could only end by submission or loss of consciousness, ippons and pins would not be scored. Kato and Helio were approximately the same size and weight and were stalemated until Kato was able to throw Helio. The Japanese Judoka began working for a choke, but Helio was able to get back to his guard and lock on a simple cross choke, which left Kato unconscious.

Helio then issued a challenge to Kimura, which was accepted. Unlike Kato, Kimura was much larger than Helio, but that did not stop the Brazilian fans from anticipating victory. Kimura and Helio met in front of a crowd of 20,000 and Gracie's supports brought a coffin to the match, meant for Kimura once their man was done with him. The outcome however would not be to the crowd's liking.

While Kimura was able to take Gracie down at will and gain position on him, he struggled to submit the smaller man. Kimura attempted a variety of submissions but Helio escaped time after time. Finally Kimura was able to lock his favorite finishing technique, the reverse ude-garami shoulder lock. This time there was no escape for Gracie and when he refused to tap Kimura broke his arm. Even then Helio refused to give in and it was his instructor and older brother, Carlos Gracie, who threw in the towel. Kimura was impressed with the skill of the Brazilian and awarded him a 6th dan black belt in Judo. To honor the Japanese Judoka's victory the Gracie family would, from this point on, refer to the reverse ude-garami as "the Kimura lock".

After he returned from Brazil, Kimura began to seek more profitable venues to display his skills and dabbled in a failed experiment of Professional Judo. Kimura had some karate experience and was friends with Karate legend and fellow God of War Masutatsu Oyama and decided to give professional wrestling a try.

A match was made with famous pro wrestler, Korean born Rikidozan and the to parties came together scripted out a dramatic draw between the two legends. But then on the day of the fight Rikidozan went off script and a strike that was supposed to land on Kimura's chest instead landed on his neck and then Rikidozan kicked Kimura in the head with a booted foot, knocking the Judoka out. Kimura's friends were outraged and Oyama even offered to kill Rikidozan, but Kimura declined the offer.

Video of the match, Rikidozan starts shooting on Kimura around 2:15

Kimura would never get a rematch with Rikidozan, and the man died ten years later when he was stabbed in a bar fight.

Kimura continued to have professional Judo and Wrestling matches, which took him back to Brazil in 1959. There at the age of 42, he accepted a grappling match with Waldemar Santana, who a year ago had defeated Helio Gracie after over three hours of fighting. Kimura easily beat Santana in gi grappling, but Santana challenged Kimura to a no gi Vale Tudo match, Kimura accepted.

After Kimura realized Santana was the superior striker he went for his signature O Soto Gari, but Santana was so sweaty he lost his grip and feel to the ground. Santana pounced on him and began to strike, but Kimura was able to escape. The match ended in a draw after forty minutes.

Kimura returned to Japan and spent the rest of his life teaching the art of Judo. Kimura would train several world class Judokas including All-Japan champions and Olympic medalists. Sadly he never progress past the rank of 7th dan black belt as the Kodokan froze his rank as punishment for his taking part in professional wrestling and issuing dan rank to Helio Gracie without Kodokan approval.

Just months after his death the Gracie family would launch the UFC. Through the Gracie family and MMA, along with Olympic Judo, Kimura's legacy lives and continues to grow. And while there is precious little video of Kimura, here is one technical film that has survived in which Kimura, over 60 at this point, teaches some of his favorite techniques.