Dan Hardy is one of my favorite fighters. His style is exciting, no matter how you slice it. I'll always root for him, no matter who he's up against. If it's King Kong, I'm rooting for Dan. On a more personal level, he's also extraordinarily likable and gives a great interview. He's interesting, intelligent, articulate, and may have some of the best stories I've ever heard. Some of his adventures are the stuff movies are made of. The man has trained with kung fu monks in China. Honestly, how many people do you know that can lay claim to something like that?

The last time I interviewed Dan, he was planning on going to the Amazon (forest, not website) on an ayahuasca retreat. For those of you that aren't familiar with ayahuasca, check it out here. Since that interview, Dan has gone on the retreat, tripped balls, met his spirit animal and is now in training for a showdown with Amir Sadollah. I recently conducted another fantastic interview with Mr. Hardy, of which there will be two parts. This one will serve as part I, and I've got to tell you, it's a doozy. It is an eight minute audio clip from our interview, and it gives you graphic detail of his retreat, from top to bottom, and even includes some crying and running about in his underwear. So, for those of you that might be contemplating something like this for yourself, here's an explicit accounting from Dan.

Check out the audio after the jump

Part II of my incredible interview with Dan will be up on Monday. 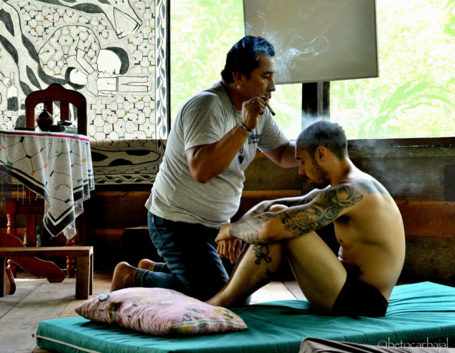