Titan FC 24 Judo Chop: Braulio Estima puts Chris Holland to sleep with an Arm Triangle from the Half Guard. GIFs, video and analysis combine to explain why this worked and what principles of grappling were useful.

Last week, Braulio Estima put Chris Holland to sleep at Titan Fighting Championships 24 with an arm triangle from the half guard. Those who may have elephant-like memories regarding MMA may recall Rick Story getting a tap from Brian Foster in a similar situation at UFC 103 almost three years ago. However, Braulio's is better and this Judo Chop will explain why.

While the fights were ongoing, Mike Riordan and I were spitballing back and forth over a wide variety of topics while waiting to see Braulio and once the Estima fight had come and gone, he expressed a sensation of "That was it? Holland didn't seem to try much." I immediately set out to counter this notion and to show how Holland not only did try, but successfully escaped the first arm triangle from what appeared to be a human anaconda in the cage that night. It was top pressure that got the tap - immense top pressure at that.

Holland was 5-3 as a professional coming into this fight and had a 6-2 amateur record. He knows what he is doing in the cage and he really did try to fend off one of the world's premier submission grapplers in an admirable fashion. This was a very good submission and the match featured some correspondingly good defense from Holland before the finish.

| Related Links: Gods of War: Braulio Estima | Brock Lesnar and the Shane Carwin Arm Triangle Judo Chop | Marlon Sandro and the Standing Arm Triangle | Chris Weidman and the Tom Lawlor D'Arce/Brabo Choke | Josh Barnett and His Invisible Grappling (many or all images broken in this one, but still worth reading) |

After the jump, lovely GIFs by Zombie Prophet and a video link to the full match on YouTube.

The video has made its way to YouTube in a variety of forms - I like this one, as it shows the tale of the tape segment beforehand:

Let us get down to brass tacks and submission attacks. The arm triangle is a fairly common choke hold used in a variety of martial arts. The Wikipedia summary has it summed up well:

Most often, an arm triangle is finished by the choker getting out of the guard of the chokee entirely and slowly rotating the choker's body as far away from the chokee as possible. This is demonstrated quite effectively by the Gracie brothers, Ryron and Rener, in their Gracie Breakdown for the UFC 136 arm triangle performed by Chael Sonnen on Brian Stann. However, someone who is able to generate a considerable amount of top pressure can finish the arm triangle from within the half guard - or even from the bottom as Mike Brown did to Taiyo Nakahara back in 2005.

Defining what "top pressure" entails is a tricky proposition, but it involves the careful positioning of the body of the person on top to bring as much weight and muscle as possible to bear on the opponent on the bottom. Most often, this positioning is used to drive the bottom person flat and onto their back and to keep them there. The very best grapplers in any grappling martial art are able to consistently put their furiously resisting opponents flat on their backs and often to score points or to submit them from that position. Some can even achieve a tap from their opponents by top pressure alone (notwithstanding the infamous "smother" by a very, ahem, "large" person). Braulio Estima is no exception to this group of top pressure cookers, although he is more famous for his unorthodox submissions and for his long, long legs. 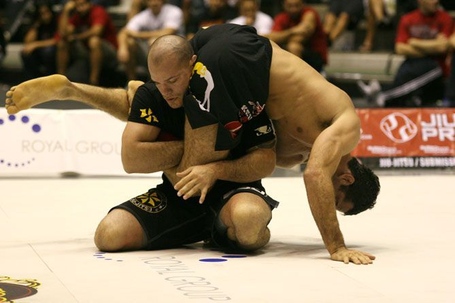 Anyways, being on the bottom and dealing with someone who has crazy good top pressure is a nightmare. Space normally open for limbs to sneak in and push away opponents is gone. The explosive escape attempts that work so well in the gym against less talented or skilled training partners are stifled even before they begin. All that is left is to use every ounce of technique available to employ the correct defenses and to wait for the momentary opportunities to escape. Chris Holland did that successfully once, but could not do it twice for Braulio is too good.

Initially, Holland stuffed several of Braulio's takedown attempts and even popped Estima pretty good with a punch. However, after some determined work, Braulio did some sort of airplane dive and actually locked his hands behind Holland's back. Riordan would scoff at this and explain like 5 billion ways to do this takedown better. We'll all be the better for letting him build a head of steam first, though. This locking of the hands lets Braulio beat the sprawl and threaten a back take during a trip takedown. Holland decided to give up mount, rather than the back - as the mount appears to be less positionally bad in general. Also, recall that there are more escapes from the mount.

From the mount, Estima begins applying as much top pressure as he can. He snakes his legs underneath those of Holland in a low grapevine, which generally keeps opponents pinned and adds one more step to the complexity of the required escapes. Estima's shoulders, head and arms are focused on the arm and neck of Holland. Note the extension of the legs and the careful retention of Holland's head and arm - this is creating some very uncomfortable pressure on Holland. The sequence is well done by Braulio and he walks his right arm upwards to cinch the arm triangle. However, Holland does sneak in a couple of good defensive moves himself. He missed the blocking of Braulio's right arm from the get-go, but gave up his left arm (closest to the cage) and once in the arm triangle set-up, brought his arm upwards. An attempt to "upa" or buck upwards does not work, but it is still worth a try. The cage prevents Braulio from rotating outwards and he does not keep Holland fully pinned on his back. This allows Chris to flip onto his side and shove Braulio back to the half guard with a knee shieldin a rather nifty fashion.

Once the shove back to half guard occurred, you can almost see Braulio regroup mentally and resolve to bring even more top pressure. The hips come upwards, the arms encircle the head/neck/shoulders and the feet move in position for a move back into mount. Holland cannot move his head/neck/shoulders at all. He cannot get his arms inwards to frame up and create space. He cannot battle with his legs to prevent the half guard pass and slide into mount. Braulio does a terrific job of using punches and elbows to distract momentarily at crucial spots. This is the human anaconda transformation. There are very few people in the world that can prevent Braulio from doing what he is doing here and it is because of that top pressure.

Holland looks so completely discombombulated at this point, despite doing some nice defensive work to beat the first arm triangle. He tries to push Braulio's arms off his head and then looks to dig underneath a thigh to sweep Estima over, but nothing works. Estima adjusts position little by little to isolate the right arm next to the head in exactly the position it needs to be in for the carotid to be squeezed. Note Estima walking his left hand up midway through the GIF before the arm of Holland is trapped - this helps when the initial set-up is not ideal. Estima brings to bear so much pressure that Holland does not resist the half-dismount and very quickly goes to sleep. No need for the full dismount and the human anaconda gets his first MMA win.

And, courtesy of Mike Riordan, I give you Fazdaev putting a Greek to sleep with an arm triangle/headlock in the 1990 Freestyle World Championships. Note the dismissive slaps to wake him back up.