Soccer kicks. While ONE FC's new and slightly confusing blend of PRIDE and Unified rules may have derailed the Tim Sylvia vs. Andrei Arlovski finish, it did deliver with two exciting finishes that you wouldn't be able to see on any other promotion.

During the prelim action, Tiger Muay Thai's Shannon Wiratchai caught Mitch Chilson with a short right hook, and followed up with a big soccer kick for the finish, but surprisingly, that wasn't even close to being the highlight of the night. The main card delivered with a ton of action, but ultimately it was Phil Baroni's PRIDE style beatdown on the prelims that stole the show.

Coming in to the fight against Rodrigo Ribeiro, a well rounded BJJ Champion from Evolve MMA, Baroni had his back on the wall and was definitely in a must-win situation. For weeks Baroni has been telling everyone that this fight will be different. He says he has moved out of Vegas, properly recovered from shoulder surgery, and rededicated his life, putting all his eggs in one basket for one last run at a championship. He kept on saying how he has put in the work, and guaranteed 'punting season' and 'Hammer House Ground and Pound 2.0' come fight time.

During fight week, even just looking at Baroni, you can already tell he's much more conditioned and confident than his first ONE FC bout last year. Come fight time, Baroni delivered on all his promises down to the letter. He landed punches standing up, stuffed takedowns, and unleashed a barrage of shots on the ground finishing Ribeiro in one minute.

During GnP 2.0 as he called it, Baroni landed 5 soccer kicks and a flurry of big punches which led to Ribeiro laying on the mat for an extended period. Following the impressive finish, thousands and thousands of Filipino fans went wild in the arena, and an enthusiastic NYBA went on with one of the more memorable post-fight celebrations.

Prior to the fight, naysayers have said that Baroni should retire, or that he would be once again lose badly to a guy from the best MMA camp in Asia. He proved them wrong, but can this reinvented Phil Baroni have one last run in him? Time will tell, but last night the NYBA clearly defied the odds, stole the show, and won him over a lot of fans.

After the jump, a the soccer kick finish and a bonus photo of Baroni celebrating after the fight.

Here's a bonus photo of Phil Baroni chugging a liter of the famous Filipino strong beer, Red Horse while celebrating in the Hotel after the fight: 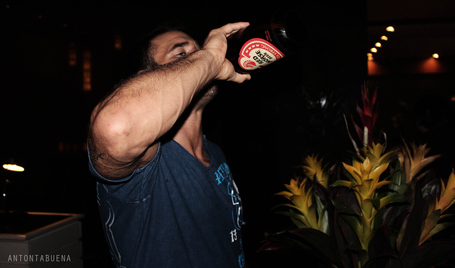