For those of you who haven't kept up with the ridiculous UFC 151 debacle; Jon Jones and Vitor Belfort are slated to meet in a title match at UFC 152, and as is my job I will be educating the fans over the coming weeks in the techniques that they are most likely to see from both men. Jon Jones has caught the public imagination as almost an unfair match to most in the light heavyweight division due to his Dhalsim-like reach and height, but the assertion that fighting with an 84 inch reach is easy is a flawed one. It takes a great deal of skill for Jones to strike as well as he does and you only need to compare him to Stefan Struve to realize the difficulty of fighting to your reach advantage.

Stefan Struve also owns an 84" reach - yet he has none of the success on the feet that Jon Jones does. This is entirely because Struve fights a shorter man's fight; stepping in with hooks, swings and stepping knees - often running right onto his opponent's punches or allowing them to tie him up and take him down with ease as Sean McCorkle did. (G) (G) Jon Jones is a unique case because he does not just have an 84 inch reach, he is absolutely ruthless with it - to the point where ridiculous talk of how he should move to heavyweight because it's unfair to make light heavyweights fight him is now commonplace.

Jones' excellent use of his reach comes firstly from excellent coaching in lengthy techniques - as his team mate Carlos Condit also demonstrates - but also from his own discipline as a student. Where Condit will get caught up in exchanges at close range and look sloppy, Jones will immediately re-establish the distance or tie his opponent up and throw them when he is forced to fight too close for his coaches' liking.

The technique that we'll look at today is the controversial push kick to the knee or Oblique kick.

Greg Jackson and Mike Winklejohn have produced several fighters who are keen on the so called chasse or oblique kick. For those of you unfamiliar with the oblique kick it is rather a specialist kick that features in both Muay Thai and Savate, but it is also fairly simple to apply. Here's a quick video demonstrating one variation of the oblique kick.

The oblique kick may be used as a snapping kick, whipping out and back in one motion, or as a thrust kick. A thrusting oblique kick is delivered by drawing the kicking knee up to your elbow, then stomping down on the opponent's knee joint at a 45 degree angle of descent. A thrusting oblique kick is most useful for self defence as it can completely destroy an opponent's knee joint but is difficult to land on a mobile, experienced fighter.

This type of front kick to the knee joint is a favourite of Mike Winklejohn's students at Jackson's MMA and can be seen in almost all of Jon Jones and Carlos Condit's recent fights. It is also seen as something of a cheap shot by many fighters as kicks to the front of the knee are very dangerous - easily capable of hyper extending the knee - and severe knee injuries are career changing affairs. Supposedly the human knee joint takes only a few points of pressure to hyper-extend when it is in a neutral or straightened position. If there is not suitable flex in a fighter's knee when he eats one of these kicks it could not just be the end of the fight but the end of his career. Mauricio Rua and Norifumi Yamamoto's recent performances should be example enough of how severe knee injuries affect the style and ability of former pound for pound greats.

The chasse / oblique kick is an extremely useful technique to strikers because it limits the action. Men like Jon Jones and Carlos Condit do well at range when they are dictating what is happening and are landing their biting kicks - they give away all of their advantages on the feet when their opponents are allowed to run at them.

An excellent example of this kick in action is Carlos Condit's use of this kick to defeat Dan Hardy. Watching the fight it was clear that Hardy was the better boxer - hitting Carlos with left hooks every time the latter ran in. Condit's boxing is not great, he throws looping punches with flared elbows and lifts his chin up as he does so - but his kicking game is excellent. Hardy's money punch is his left hook at he gave Condit trouble with it all night. To throw a powerful left hook the weight must start over the left leg, so that one can drive off of it and rotate the left hip and shoulder to the right. By using the oblique kick into Dan Hardy's lead knee repeatedly, Carlos Condit forced Hardy onto his back foot. 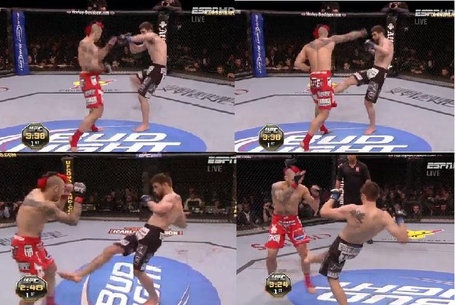 In the above stills you will notice that Condit really troubled Hardy as soon as he started throwing his chasse / oblique kick. In the top two stills Hardy attempts a right hand lead, doubtless to set up his left hook, but his knee is almost hyper extended by Condit as Hardy puts his weight forward. In the bottom two stills you can see that Hardy's stance is much shorter and his legs are underneath him, rather than spread to drive off of and create power. (G) 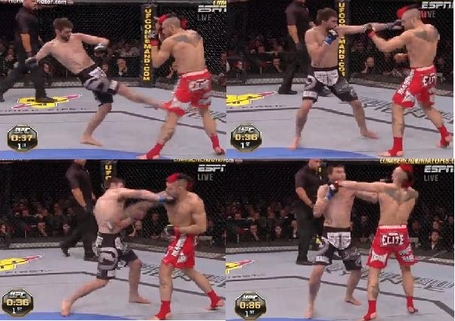 Condit's kicking of Hardy's front knee literally put Hardy on the back foot, as Hardy was reluctant to put weight on his lead leg so that he could pick it up and get it out of the way. This removed the power from Hardy's left hook as he could not plant his left foot deep in front of him to throw it. Notice in the last sequence - the three punch exchange that everyone remembers is immediately preceeded by the chasse to the knee which again almost hyper extends Hardy's knee joint. Hardy draws his lead leg back as Hardy dives in.

You will notice that Hardy tried to use his usual left hook counter (bottom right still, end of the sequence) but his feet were so close together underneath him that he had no power in his punch, where Condit was driving from his legs and hips with his own left hook. The UFC commentary played up the "Condit got there first" angle, but Hardy's punch connected anyway and had none of it's usual power, simply due to the fact that he was forced out of his usual sprinter's style stance.

The chasse is excellent against big punchers because men with a great right hand need to dive on to their left leg as they throw their right, and men with a great left hook need to put their weight on their left leg before they throw their left. You cannot punch effectively if you are can't transfer your body weight onto your lead leg, and the chasse takes away the ability to do that by threatening to hyper-extend the knee joint every time weight is placed on it.

Quinton Jackson was an absolute tailor made match up for Jon Jones - he gave up ten inches of reach, has slow feet, and relies entirely on his left hook; the shortest punch in the traditional boxing arsenal aside from uppercuts. His usual tactic is to let men attack him, block their shots on his elbows and arms, and fire back. Against Jones he sat on the end of Jones' reach, doing nothing but eating kicks. To Jones' credit, however, he actively made Rampage's chances of getting in close much worse by routinely using the chasse / oblique kick.

Here are just a handful of the chasse / oblique kicks that Jones used throughout the fight. Jones went to this tactic over and over again and it damages Rampage more than any other. In the third round Jones caught Rampage flat footed and clearly injured the latter's knee joint. Rampage moved with a limp from that moment on and the finish came in the next round. Rampage was unable to put weight on his knee when Jones was kicking, for fear of eating the kick, and once the injury had taken place he simply had no hope of hurting Jones with his punches. All punching power comes from the legs - Rampage is one of the biggest hitters in the UFC but he cannot hit hard if he cannot use his legs.

Jones has also used this technique against Lyoto Machida, to counter the latter's ability to explode in from a great distance - this is the one skill that Vitor Belfort brings to the table. Look for Jones to use the oblique kick to keep Belfort at distance and brutalise him with the kicks that Belfort has always struggled against.