Due to the cancellation of UFC 151 we now have several weeks without a UFC event and while that often makes a journalist's job harder, it gives me chance to catch up on some of the requests I have had in recent months. I wanted to start with a piece that I promised before I went on hiatus back in April - an analysis of Chuck Liddell. Liddell was a pioneer in many senses:

Liddell was also a massive fan favourite because he provided what casual fans love - consistency. Nobody wants to miss an event and find out that the title has changed hands, and during Chuck's title run there seemed to be no stopping him. Further than that, Liddell was extremely consistent in his knockouts; from April 2004 to December 2006 none of his opponents succeeded in hearing the final bell.

In this series we will examine many of Liddell's techniques, but today we will examine his offensive power punches. Liddell was not famous for jabbing or throwing long combinations, he was famous for his "one and done" power hooks. Today I hope to give a little insight on:

The overhand right has become Liddell's trademark which is odd because he didn't throw it as often as it's notoriety would indicate. Indeed the most effective use of Liddell's overhand came in the PRIDE Middleweight Grand Prix against a young Alistair Overeem. Against the young Dutch fighter, not yet known as Ubereem but rather just "The Demolition Man", Liddell had a slow start - eating some punches and the mule like kicks and knees of Overeem. Liddell was able to turn the fight around however by taking advantage of Alistair Overeem's already famous tendency to start fast and struggle afterwards. As Overeem's output slowed a little Liddell was able to catch him with a short right hook from the clinch - this right hook was what Jack Dempsey called a "sneaker": not waiting for the referee to break your clinch but to break the clinch yourself and catch the opponent with a completely legal punch as you both exit. 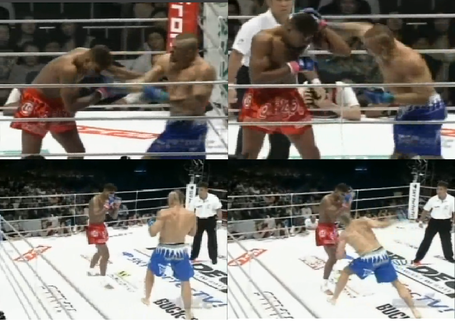 In the top left still Liddell catches Overeem with a right hook as they come out of a clinch. Overeem covers and Liddell pounds a right hook against his guard - putting Overeem on rubber legs. Overeem switches stance to attempt to confuse Liddell a bit and prevent him from following but Liddell simply steps his lead foot outside of Overeem's (perfect form against a southpaw) and throws his famous overhand.

You may wonder why I called the first two punches right hooks and the last punch and overhand. Generally overhands don't exist in good boxing - it is normally a right hook combined with an inside slip rather than a front stroke style arm motion - but Liddell's last punch is undeniably an overhand and something that he and few others have done well. (G) 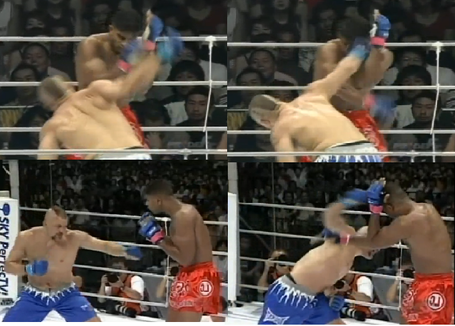 Notice how Liddel's arm does not come in from the side, where it would collide with Overeem's block, but rather comes down the centre of Alistair's guard almost vertically. As someone who is reluctant to classify the overhand as a punch due to all the sloppy form on right hooks that is justified by fighters saying "but it's an overhand", Liddell's punch is undeniably unique and relies on coming downward rather than around. This near vertical punch is one of the few techniques that comes through the above blind angle.

To reiterate, a blind angle is the angle at which one cannot see a technique coming in one's peripheral vision. The commonly used blind angle is the angle from below - a front snap kick such as Anderson Silva's can be perfectly hidden if it is commenced from close enough in. The blind angle above an opponent's field of vision is much harder to exploit - the three most common techniques which I can think of which do exploit it are the downward elbow (illegal in MMA), the axe kick (good luck trying), and Liddell's vertical overhand. If you cannot axe kick, and you aren't fighting under pure Muay Thai rules where downward elbows are legal, this vertical overhand is a fantastic techniqiue to learn because it exploits a completely different angle from everything else you will ever be taught.

To go back to Liddell's overhand on Overeem there are a couple of points to be conveyed. Notice that Liddell drops his head to his left side, dropping his left shoulder and placing his right shoulder almost above it, allowing his fist to move through the almost vertical plane. Then notice that Liddell drops his right hand before he throws it. This is a common feature of power punchers, dropping the punching hand to circle it around for greater momentum rather than throwing it straight to the target. As Liddell's head is moving so far away from Overeem's left hand, it is relatively safe for him to drop his right before he throws it and simply serves to add power where his head movement has replaced the need for a right handed block.

The second punch we will look at in today's article is Liddell's looping left hook. Now remember, this piece is on offensive punching and not counter punching - so left hooks landed in exchanges and on the counter will not be looked at. There is a specific example of an offensive left hook that I want to talk about; Liddell's knockout of Kevin Randleman.

Randleman is far from the sport's premier striker, but he at least knew how to defend himself and was in the majority of his bouts above being the victim of a one punch KO. Liddell's job of hypnotizing Randleman before landing his left hook was absolutely beautiful. (G)

Last week I talked about milling - the act of circling one's lead hand back and forth or from side to side - between a coiled position and a slightly extended position. It was the secret to Junior dos Santos landing jabs so frequently on Shane Carwin and it is also the secret to being able to lead with a left hook effectively. Liddell's milling is very famous, swaying his left arm in front of his body and coiling it back on his left side, ready to hook or jab. Against Randleman, Liddell continuously circled towards his own right, making sure to never stop moving and making Randleman continuously pivot to face him. Randleman was the superior wrestler but because he was constantly having to readjust to where Liddell was his shot was stifled and on the one occasion he did shoot it looked uncomfortable and easy for Chuck to stuff against the fence. 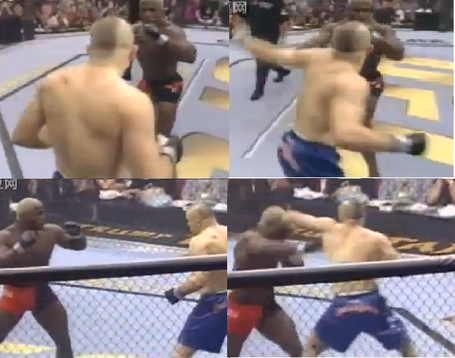 Notice in the top left and bottom left stills (different angles of the same moment) - Liddell's lead arm looks passive but it is actually coiled and ready to fire either a jab or lead hook. In the top left still notice how far Liddell's lead elbow is outside of his body, and notice that his shoulders are squared up. He is in perfect position to throw a power punch but to Randleman he simply looks like he is bouncing around between attacks and staying loose. The hook comes right out of this coiled arm position and in video takes barely a frame to connect on Randleman's temple.

In the next edition of Analysing the Ice Man we'll look extensively at Chuck Liddell's famous counter punches.