Share All sharing options for: Judo Chop Finish of the Week: Glover Teixeira vs Marvin Eastman

It's Monday morning and that means that it's time for the Judo Chop Finish of the Week. After the storm of confusion and nonsense that surrounded the now dead UFC 151, I'm sure many of you would welcome a break from all things Jon Jones, Chael Sonnen, Vitor Belfort, Lyoto Machida and Dan Henderson. Instead we'll turn our attention to one of the young stars of the UFC's light heavyweight division - one still grafting for respect and success, as yet untouched by delusions of grandeur - Glover Teixeira.

Having struggled with Visa issues for much of his career, Teixeira made his long awaited and overdue UFC debut in May, demolishing Kyle Kingsbury in under 2 minutes at UFC 146. Having gone undefeated for 6 years against the biggest names outside of the UFC light heavyweight division, many expected big things from Teixeira but few prospects who reach stardom outside of Zuffa promotions have such a successful UFC debut. The hype around Glover is incredible, but what does he really do? Many fans have seen less than 2 minutes of him in action, but today's FOTW will give you a glimpse at the one size fits all gameplan of Glover Texeira.

Marvin Eastman may not be the stiffest competition but he's been in the ring with and has been knocked out by some of the best - and Glover knocked him out as good as any other fighter has. What you will notice, if you hadn't picked up on it from the Kingsbury fight, is that Glover Teixeira does not jab. Texeira's sole strategy in this fight was to walk forward and throw his right hand as a pre-emptive counter to everything that Eastman threw. This strategy is not entirely alien to fans - it is the entire gameplan of Mauricio Rua on most days - and if you have decent timing it works extremely well.

Here is Mauricio 'Shogun' Rua demonstrating the same cross counter strategy against Lyoto Machida and Forrest Griffin. It is a staple of Shogun's arsenal and of Alistair Overeem's, but it seems to be the entirety of Glover Teixeira's. 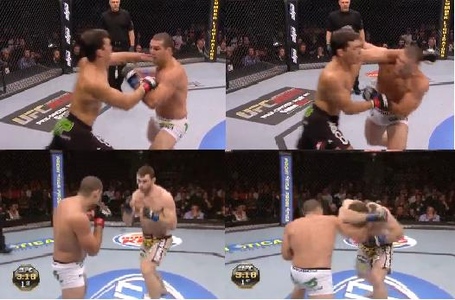 Texeira's strategy is no mystery to anyone - indeed it took dozens of lead right hooks to catch Eastman while the latter was punching - but his head movement is enough to take him out of the way of most possible hand attacks. When Texeira has completed his slipping right hook, he will bring his head back to the centre with a powerful left hook. If the opponent attempts to cover from the right hook and fire back, Glover will usually catch them with the left hook. It's not especially scientific, but through continually attempting to time his right hook over his opponent's jab or inside of their right hand Glover can grind his opponent's down and catch them with a hard blow eventually. A quick look through this highlight will show just how minimalist Teixeira's striking strategy is.

Nearer to the time of UFC 153 I will write a comprehensive breakdown of Glover's cross counter led striking and how it matches up with Rampage Jackson's "catch and pitch" style of boxing, but for now I will say that if Glover chooses to bring in the same style as he did in all of his previous fights, he may well be the perfect opponent to give Jackson his first finish in 4 years. If the fight with Eastman shows anything it is that while Glover is a huge finisher his overmatched opponents can hang around for some time longer than they should be allowed to simply because he is so one dimensional in his striking style.