Several months ago I wrote a piece called Fight Like Dos Santos: The Right Body Straight which was supposed to be part of a series breaking down the key techniques of MMA's only true boxer-puncher. This was my last piece at Head Kick Legend and since then I have failed to go back to the series. That changes today as we delve back in to the striking techniques of Junior Dos Santos.

Many may ask what the point of this series is, obviously not everyone can be a 240lbs fighter that moves like a middleweight. The purpose of this series is firstly to shed light on some of Cigano's techniques for the layman, and secondly to give the MMA / boxing / kickboxing trainee some insights on techniques which they might struggle to land. This won't be my personal philosophies but rather the techniques that Dos Santos has proven in action.

One of the reasons that Dos Santos has hypnotized the MMA fan base is that he is not just a slugger who throws one punch or wades in swinging - like almost everyone in MMA, even the strikers. Cigano is a boxer-puncher, using long punches such as the jab and the right body straight to set up his power punches. He rarely throws combinations outside of 2 or 3 punches in length (except when he is swarming on a hurt opponent), but he works the entire upper body and head throughout his combinations. Not everyone can be Dos Santos, but his strategies are so sound that they are often imitable.

Today we will focus our attention on the toughest punch to learn, the left hook (G). Dos Santos tends to use this is one of several ways:

- After a Faked Right

Junior dos Santos is one of the few fighters in MMA who can actually lead well with a left hook from a natural, correct boxing stance. Many men such as Paul Daley and Quinton Jackson lead with left hooks, but because they stand so square on it is obvious that they plan to. Dos Santos' lead left hook comes right out of his stance, doesn't carry huge power, but provides a nice alternate to his jab.

Against Shane Carwin many touted Dos Santos' ability to land his jab so often. Shane Carwin is not a dumb fighter, and his boxing is very solid, no amount of a speed advantage would allow Junior to simply repeatedly throw the straight jab and land it over and over. Dos Santos' secret to success was mixing between the strong left jab and the long left hook right out of his stance. 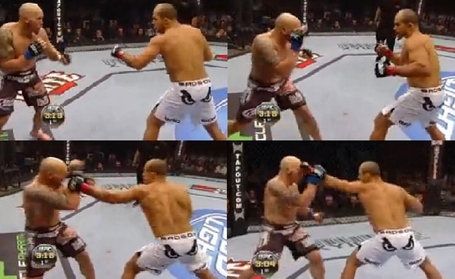 Dos Santos' ability to seamlessly mix the jab and lead hook comes from his performing what in the bare knuckle boxing days was referred to as "milling". This is the act of circling the hands as you often see in old movies when gentlemen are about to engage in fisticuffs. Dos Santos' motion is not as exaggerated but it is the same principle - he constantly circles his lead hand between the neutral position in the top left still and the coiled position in the top right still. Every time he circles his hand out again the opponent worries it is a punch, and every time he comes back to coil he brings his lead hand outside of his lead shoulder, allowing him to lead with a left hook or a jab. In the bottom left still Junior leads with a left hook, catching Carwin's arm from the outside. Seconds later he leads with a jab and lands inside of Carwin's hand as Carwin is clearly trying to play catch up with his defence.

This milling motion is as old as pugilism itself, but it is continually forgotten or under-rated by fighters and coaches. Here is a nice clip of the Boston Strong Boy, John L. Sullivan - first heavyweight champion of the world - demonstrating milling to set up a jab or left swing.

It looks silly and outdated, but watch the Shane Carwin fight again and see how well this seemingly primitive technique baffles a top level UFC heavyweight over and over again. Dos Santos' ability to lead with a left hook gives him two fast options right out of his stance where most fighters only have the jab.

After a Faked Right

One classical way of landing an offensive left hook is to set it up with the right hand. Against Cain Velasquez, Dos Santos opened with three powerful right hands in a row - two to the head and one to the body. Then he moved his head and faked a right straight before jumping in with a left hook to Cain's body. 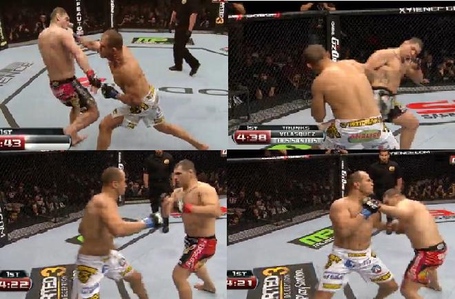 The top two stills are instances of Dos Santos landing his right hand on Velasquez, or at least passing Cain's defence and flustering him - as his left hook did to carwin in the first storyboard. In the bottom left still Dos Santos fakes a right and steps in with a left hook to the body. Cain succeeds in landing a left hook on Dos Santos' shoulder, and Dos Santos' chin is up, showing that even the best make mistakes - but this stepping left hook is something that can be seen over and over in his padwork with Dorea before each UFC event. The act of faking the right hand also squares the hips, allowing a powerful left hook to be thrown.

The left hook is a good offensive punch but in truth it is best as a counter. It works especially well when an adversary is running in with straight strikes, and a left hook can come in from the side and wobble him from a very short range. Just last week we looked at Sugar Ray Robinson and Joe Walcott using their left hooks as counters against aggressive opponents - and while they were much, much, much better boxers than Dos Santos, he uses the counter left hook to great effect also.

The left hook, if a fighter owns a good one, is excellent for causing hurt in exchanges because it is such a short motion which comes in from an odd angle. It is worth investing the time to learn properly simply because it turns every wild exchange into a good chance to hurt the opponent or re-establish the distance. Every good boxer / striker is going to end up in a wild exchange eventually, and the left hook is a great ace to have up your sleeve. In exchanges the opponents hands will come out of position and his chin will be unprotected, unlike when you are attempting to catch him at range.

A great example of this is Dos Santos' knockout of Gabriel Gonzaga. While Gonzaga's boxing is far from stellar, Dos Santos was struggling to land much of note from range. It was only when Gonzaga stepped in to perform a left high kick that Dos Santos found the mark, with a powerful left hook. 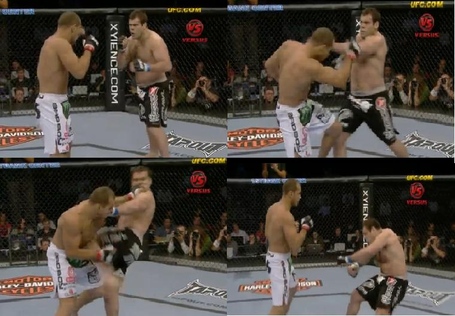 Notice how Gonzaga drops his right hand in excitement, this is all that protected him from Dos Santos' left hook and he refused to drop it at range. When a fighter gets excited and over commits to a technique is the best time to take advantage, and the left hook is one of the shortest, fastest ways to do that. 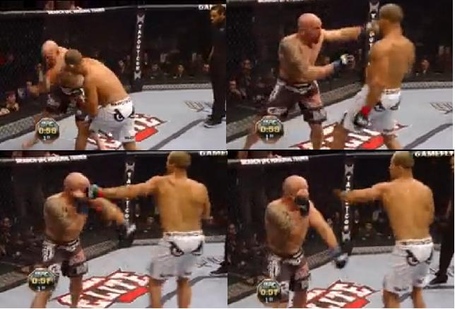 Here Dos Santos enters with a powerfl right hand then leans back as he retreats, forcing Carwin to miss. Notice how Junior drops his hand outside of his lead thigh so that he can swing it across his body with power - Giorgio Petrosyan does this a lot with his right hook. Junior's left hook glances Carwin as Carwin attempts to chase him but ultimately doesn't accomplish it's purpose.

Later in the first round Dos Santos succeeded in dropping Carwin with the same left hook on the exit. (G) 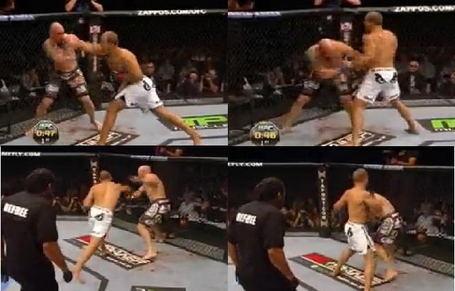 Notice in this storyboard (I apologize for the bad quality) that Dos Santos lands a long right hand along the fence, then catches Carwin with the left hook as he moves back. Carwin is very much a brawler and Dos Santos likely knew that Carwin would try to chase him into exchanges where his enormous power and great chin would nullify the Brazilian's boxing ability. Consequently Dos Santos' gameplan in the first round was to convince Carwin to chase, then hurt him as he did so. The bottom two stills show the punches from another angle.

The next edition of Fight Like Dos Santos will focus on Dos Santos' famous uppercut - his set ups for it and the variations that he uses.

To learn more about Dos Santos' techniques, pick up the Advanced Striking ebook which contains 5 strategies utilized by Dos Santos along with 70 others from 19 other fighters.