This FanPost was promoted to the front page by Scott Haber

Recently, we have been seeing a blitz of fight announcements for the UFC's next visit to Brazil at UFC 153. The bout Globo has just reported will likely be the last to make up the twelve-fight card, and it is a pretty fun fight. We will see two fellow Brazilians fight each other as Gleison Tibau will take on Francisco Drinaldo, welcoming him to the UFC's lightweight ranks. 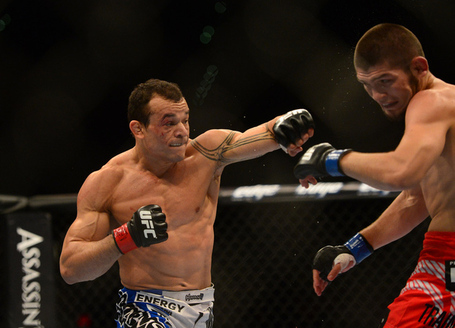 Gleison Tibau is about just as big as one can get while being able to drop to lightweight. For a time, he was criticized heavily for lacking important skills, but he has recently turned that all around. It has been clear that his boxing has tightened up very well, and he has begun to implement jiu jitsu into his game as well. He is currently 3-1 in his last 4, including wins over notable fighters Kurt Pellegrino and Rafael Dos Anjos. He has recently lost a controversial decision to Khabib Nurmagamedov, and would like to get back the momentum he had prior to the loss.

"Massaranduba" is a hot prospect from Brazil, and he recently was a competitor on The Ultimate Fighter Brazil where he competed two weight classes above where he usually would. He got into the house after winning a bout with Charles Maicon by TKO. He lost his next bout in the house to Thiago Perpétuo, but still got to fight in the UFC at UFC 147. At the event, he impressively defeated Delson Heleno by TKO in the first round at 185 lbs. In his short run at middleweight, it was clear he was carrying a lot of extra muscle, and it will be interesting to see how he reacts to having to drop all of that weight. He will be entering the bout with Tibau on a five fight win streak.