The following is a comprehensive albeit belated review of the judges' score for the Ben Henderson vs. Frankie Edgar rematch in the main event of UFC 150 last Saturday. Though we've been treated to more contentious decisions than this, more than a few insist that Edgar deserved the nod and the cageside judges turned in contrasting scores (Dave Hagen and Mark Van Tine had it 48-47 for Henderson while Tony Weeks saw it 49-46 for Edgar). In a recent poll on Bloody Elbow, the community was almost evenly split (at the time of writing) with 260 votes for Henderson, 240 for Edgar and 36 votes for a draw.

I've dusted off my trusty Round Scoring Graph to map out all the significant offense mounted by both fighters in each round. A number is placed to either the left (for Henderson) or to the right (for Edgar) for any score-worthy actions, and done so in descending order as the round-time ticks away. A brief description of the action and how effective it was follows each graph and is accordingly numbered. I've added some random conclusions in italics that are derived from watching the fight a second time with the luxury of rewinding and scrutinizing. 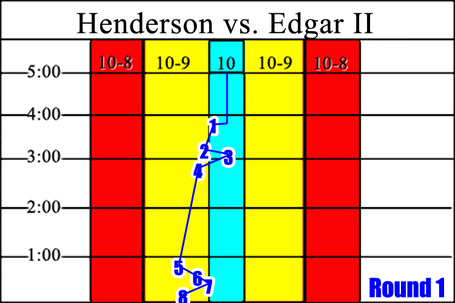 Summary: Even with an open mind, one would be hard-pressed to drum up a case for Edgar here. Henderson clearly landed the more damaging and effective strikes with the low kicks, one of which scooted Edgar's legs out from underneath him, and the plunging knee to the body. Grappling wise, he also nullified Edgar's takedown by threatening with more portentous offense in the guillotine, which forced Frankie to defend at all costs for the last twenty seconds.

Rounds 2-5 are posted in the full entry. 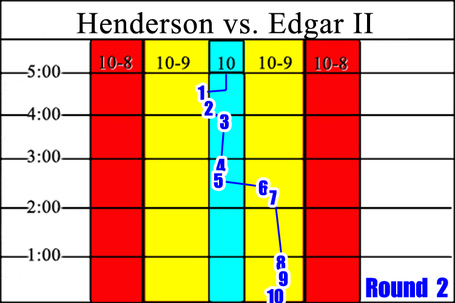 Summary: This is an indisputable nod for Edgar and approaching the 10-8 realm for his late-round dominance. Take it easy -- I said "approaching." The 2nd half of the round is classic 10-8 material: Edgar notched a clean knockdown, completely controlled Henderson from the front headlock and continuously threatened with chokes; Henderson spent that entire time doing nothing but defending and the only shred of offense he mounted was the body kick right at the bell. Were it not for the early low kick that swept Edgar off his feet, which is indicative of a very significant and effective strike, this would be a 10-8 in my book. 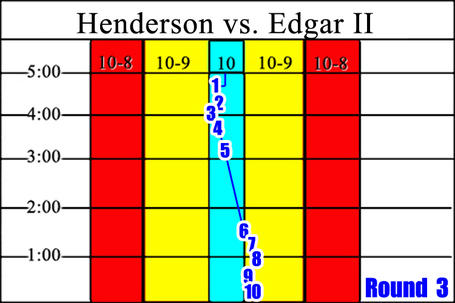 Summary: Henderson was only sparsely successful in the opening and closing minute of this round with roughly three actions: the swiping high kick early, the low kick with about 30-seconds left and the mostly-blocked right at the bell. I don't think anyone could argue against Edgar landing the higher volume of strikes so, since the entire round took place on the feet, the question becomes whether Henderson's lower volume of landed strikes was considerably more significant in order to surpass Edgar's volume.

This is where subjectivity and individual interpretation come into play, but I don't think they were. The few blows he landed were harder but Edgar also landed some stiff shots, more overall and also gets my nod in the auxiliary measures of control and aggression for his helmsmanship from 4:00 on the clock to about 0:30. In my personal opinion, this round wasn't as close after re-watching as I remember it being live. 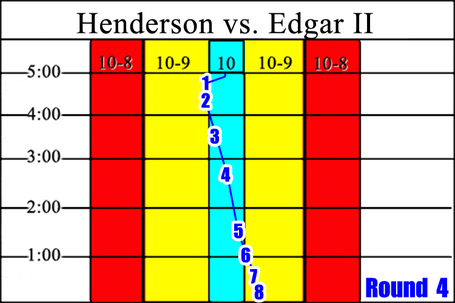 Summary: Again, Edgar landed the higher volume of strikes, dictated the bulk of the exchanges, scored a takedown and controlled Henderson from the front-headlock while the champ merely defended for a long (and critical) period of time. The question is the same: did Henderson do anything drastically more significant to out-weigh Edgar's higher volume of offense (more strikes landed, takedown, minute of forcing pure defense and a better case for winning aggression and control)? I don't think so. I'm quite liberal with 10-10 rounds but the last two creep into a close 10-9 on my card. 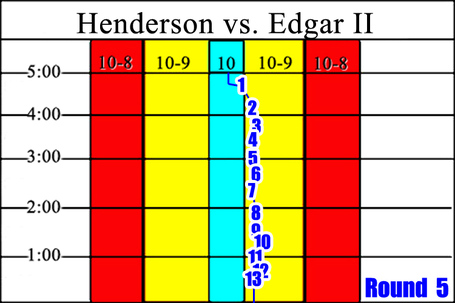 Summary: I see no justification for elevating Henderson's offense higher in this round when compared to Edgar's higher volume of landed strikes. Others may view it differently, but they'd have to substantiate how and why Henderson's lower output of offense deserves to be not only equal with Edgar's superior output, but worthy enough to win him the round. If anyone does feel this way, please voice it in the comments.

UFC 150 Judges Overall Score: Dave Hagen and Mark Van Tine had it 48-47 Henderson while Tony Weeks penned the same 49-46 for Edgar that I did.

All judging and scoring information from MMADecisions.com