The Martial Chronicles: The Forgotten Olympic History of Catch-As-Catch-Can Wrestling

With the 2012 Olympic Games drawing to a close the United States wrestling team will be leaving London the proud owners of two gold medals in men's freestyle thanks to the efforts of Jordan Borroughs and Jake Varner. In an odd coincidence, over a century ago, the United States achieved those identical results. At the London Games in 1908, George N. Mehnert and G.S. Dole both captured gold in wrestling, though neither competed in freestyle nor in Greco-Roman, but instead in catch-as-catch-can wrestling.

Share All sharing options for: The Martial Chronicles: The Forgotten Olympic History of Catch-As-Catch-Can Wrestling

Catch-as-catch-can, with its combination of traditional freestyle wrestling pins and the holds of submission grappling, has captivated the imagination of modern combat sports fans. Many of these fans would be surprised to learn that something as violent as catch wrestling was once a part of the Olympic games. Its inclusion is a testament to the appeal the sport held in the early 20th century in both the United States and the United Kingdom. But ironically enough, it was this inclusion of catch-as-catch-can wrestling in the Olympic games that led to its near extinction.

Wrestling has a storied traditon with regards to the Olympic Games. It was the very first competition to be added to the ancient games of Greece, with the first matches held in 708 BC. Even with such a long and deep connection, the modern games were not so quick to embrace the sport. The first modern Olympic games, which were held in Greece in 1896, included only the Greco-Roman style of wrestling. The reason behind this decision is almost comical: officials mistakenly assumed from its name that it was the wrestling of Plato and not, in fact, that of the French showman Jean Exbroyat. Wrestling's first Olympic champion would be Carl Schuhmann of Germany (who also would claim first place in horse jumping and the parallel bars ) who would edge out five other wrestlers from four nations in an open weight tournament to capture first place and the silver medal that came with it.

As humble as wrestling's introduction was at these first games they could at least take pride in the fact that it was present, unlike the second Olympiad in Paris, which hosted no wrestling matches at all. Even with, or perhaps because of, the immense popularity professional Greco-Roman wrestling was exhibiting in 1900 at the Folies Bergères and the Casino de Paris, officials decided not to even offer their homegrown style. Instead they chose to replace it with aquatics, which they apparently deemed as more representative of the Olympian ideal.

That catch-as-catch-can, or Lancashire wrestling as it is also known, was shunned by the Olympics in the early days should come as no surprise, for it held a terrible reputation due to its violent nature:

"With regard to Lancashire wrestling there can be no question that it is the most barbarous of the English systems and more nearly approaches the French dog-fighting and tumbling than any other - a fair stand up fight with the naked fists is the merest skim milk, in fact a perfect drawing room entertainment, in comparison."

It would not be until the 1904 games in Saint Louis that we would see wrestling return to the Olympics, but oddly enough this time it would be limited to catch-as-catch-can and not Greco-Roman. Equally odd was the fact that all the participants were exclusively American. That years competition had doubled as the United States AAU championships and even though there were 42 wrestlers (supposedly) representing five different nations, every participant was in fact a US citizen. Even those that had foreign flags raised following their victories: Charles Ericksen and Bernhof Hanson both won gold for Norway as members of the Brooklyn Norwegier Turnverein. (It was also the first year that the tradition of awarding those that placed first, second, and third in an event with a gold, silver, or bronze medal was started.)

The Saint Louis games were contested under specially designed AAU rules that were very different from the usual two-out-of-three falls, no time limit, no-holds-barred rules that catch-as-catch-can was usually contested under. The format was a single elimination tournament, with bouts being six minutes in duration plus an extra three minutes for overtime, In the case that no pinfall was registered, a judge would render the final decision. Competition was held in seven weight classes: light-fly (47.6 kg), fly (52.2 kg), bantam (56.7 kg), feather (61.2 kg), light (65.3 kg), welter (71.7 kg), and heavy (over 71.7kg). In addition, the stranglehold and various "torture holds" were banned from use. 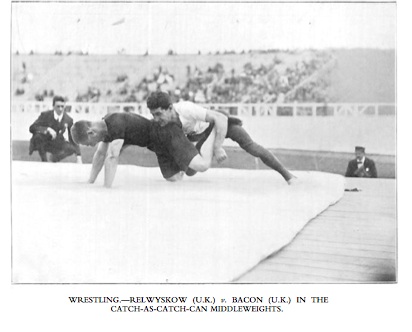 It was at the 1908 London games that wrestling, both Greco-Roman and catch-as-catch-can, was finally presented in full competition. Wrestlers from around the globe would take part, although the vast majority of the participants in catch were of British stock, and a majority amongst them were from Wigan and Lancashire. Overall there would be 115 competitors from 15 nations (including one Johanne Josefsson from Iceland taking part in Greco-Roman) grappling in London under the auspices of the National Amateur Wrestling Association of Great Britain.

All matches were best of one fall, except for the medal rounds, which would be best of two-out-of-three. The catch-as-catch-can matches were limited to 15 minutes in length, while Greco-Roman had twenty minutes to work for a "throw". In both styles, in the case that a pin failed to be obtained the winner would be decided by the judges present. As was usual with catch and Lancashire wrestling, "wrestlers shall take hold how and where they please," but, to the likely chagrin of many of the Wigan participants, it was "subject to the following restrictions :"

The wrestlers are not allowed to strike or scratch.

The hair, flesh, ears, private parts, or clothes may not be seized, the twisting of fingers and thumbs is forbidden, nor may any such hold be obtained that the fear of breakage or dislocation of a limb shall induce a wrestler to give the fall.

It shall be unlawful to butt or to kick, but striking with the side of the foot shall not be deemed kicking.

The following holds are barred : The double-nelson, the arm or foot up the back with the bar on ; the hammerlock ; the strangle; the half-strangle ; the scissors ; the hang ; the flying mare with the palm uppermost ; the foot twist.

In the end, amongst the many UK gold medalist in catch-as-catch-can, were two Americans. George N. Mehnert, the champion of the 115 lb division at the 1904 Olympics in Saint Louis and 6 time AAU champion, was the winner of the bantamweight champion in London, while his compatriot, Yale student George S. Dole, the four time winner of the inter-collegiate championship and the only man Mehert had ever lost to in his 100 plus matches, took home the gold in the featherweight division. 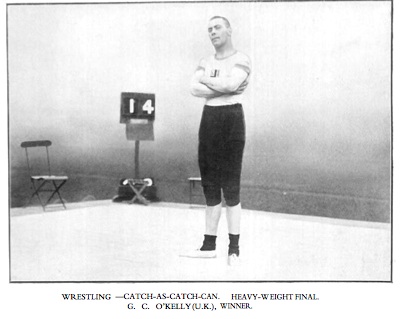 For the United Kingdom, their most outstanding representative was Con O'Kelly, an Irishman originally from Cork but who was serving as a constable in Hull at the time of the Olympics. Shortly before the games he was hospitalised when a wall fell on him while patrolling his beat, Fortunately, he managed to recover in time to compete and capture gold at heavyweight in catch-as-catch-can. Afterwards O'Kelly retired from the police and turned professional, but his career soon ran into a brick wall by the name of Georges Hackenschmidt. Following his quick defeat at the hands of the Russian Lion, O'Kelly gave up wrestling and instead turned his sights on professional boxing,

The year 1908 would prove to be a high water mark for legitimate catch-as-catch-can wrestling, and London (with the possible exception of the Gotch-Hackenschmidt contest that year in Chicago) was at the center of it. Early that year the National Sporting Club organized an open-to-the-world tournament at the the Alhambra Theatre (Mark Hewitt has a whole chapter detailing the 1908 Alhambra Tournament in his book, Catch 2). This was followed by Hegler's Circus, who hosted their own event, an eight week tournament involving 135 competitors in 4 weight classes.

The following Olympics, the 1912 games in Stockholm Sweden, would see Greco-Roman contested in five weight classes, but catch-as-catch-can would once again removed from competition. In its place were demonstrations in Icelandic wrestling or glima. The Greco-Roman contests proved to be a disaster that year, with no gold medal being given in the 90 kg weight class after Anders Ahlgren of Sweden and Ivar Bohling of Finland were unable to come to a decision after 9 hours of wrestling. This was followed by an even more incredible 11 hour match between Alfred Asikainen of Finland and Martin Klein of Estonia. In addition there was no set rules for the contests. "Each country had its own rules and great differences can be found. The committee had to choose among the material at its disposal those regulations which it was thought might be of use in drawing up the proposed rules for the competition."

A member of the U.S. team of 1912, William Lyshon of Philadelphia, wrote following the games "I never saw so many injustices and so many rules broken in my life." In answer to the many problems revealed in Stockholm, 1912 saw the founding of La Fédération Internationale de Lutte Amateur (FILA) or the International Federation of Amateur Wrestling. Its purpose was to oversee and establish international standards for wrestling events. This included both Greco-Roman and catch-as-catch-can, and the changes it would introduce would have a wide-ranging repercussions.

Catch-as-catch-can would not return to the Olympics again until 1920 (the 1916 games were aborted do to the Great War), and even then only after the open campaigning for its inclusion by AAU officials in the United States.

At the 1920 games the United States would end up with one gold, two silver, and three bronze medal in catch-as-catch-can. The opportunity for second gold medal was narrowly missed when heavyweight Nat Pendelton, who also wrestled at light heavyweight in the Greco-Roman event, lost his first match in five years on a controversial call by the referee, forcing him to settle for the silver. (In the wake of his Olympic glory, Pendleton would enter professional wrestling, where he would eventually take part in one of the most famous "shoot" matches of his era.)

The 1920 games in Antwerp would also see the return of many of the same rules that had been present in 1908, including the five weight classes, time limits, judges and scoring, and restrictions on many of the more punishing holds. These rules would be codified the very next year by FILA with their "Rules of the Game". The sport contested under these rules would be christened freestyle, which appears to have been a translation of the French lutte libre, which itself is the French translation of catch-as-catch-can. This renaming may have been somewhat deliberate, with wrestling officials trying to separate what was now called freestyle from catch-as-catch-can and all the scandals and chicanery associated with it thanks to professional wrestling.

For its part, the New York Athletic Commission made an attempt to clean up professional wrestling by banning certain "punishing holds", introducing time-limits, judges, a scoring system, and allowing for flying falls. In the end all of these were rejected and professional wrestling drifted completely into the realm of worked.

In 1922, the Amateur Athletic Union (AAU) would follow the International Federation of Associated Wrestling Styles lead and abandon catch-as-catch-can, choosing to adopt freestyle as one of its two official styles of wrestling (along with Greco-Roman). With it no longer being practiced amongst amateur wrestlers, be it in international competition, AAU, or collegiate (which generally used AAU rules until 1927 when the rules for collegiate wrestling were published), nor being (legitimately) contested at the professional level, catch soon faded from sight. Catch-as-catch-can, the famed wrestling of Frank Gotch, Farmer Burns, and Evan "The Strangler" Lewis, which had been so popular a few years earlier that American officials were begging for its inclusion in international events, was now, for all practical purposes, extinct.