With the rematch between Frankie Edgar and Ben Henderson due for UFC 150, I thought it would be sensible to take a look at one of the techniques which Edgar uses in every fight to great affect. Ben Henderson defended this technique perhaps once out of the handful of times Edgar used it in their first bout. If Edgar and his coaches have watched the film of the first fight and taken any good points away from it, you can expect to see much more of Frankie Edgar's single leg pickup.

Mixed Martial Arts on the whole is a sport which isn't evolving nearly as fast as pundits claims, but one area that has improved exponentially is takedown defense across the board. With the exception of the occasional freakish wrestler with a power double, shooting long takedowns from the outside is extremely outdated and largely ineffective. Despite takedown defense improving on the whole, the setting up of takedowns is still pretty mediocre across the sport.

Watch any of Urijah Faber's title shots, or Scott Jorgensen's recent career and notice how running in wildly or spamming the jab in hopes of getting a takedown have failed each man respectively. One of the elements of Frankie Edgar's game which makes him so effective against bigger men and better wrestlers is his ability to disguise his favourite takedown with his jab almost seamlessly.

It should be noted that my knowledge of wrestling is poor and I don't claim to understand the art - no Englishman would - but I do understand the striking game, and the secret to Edgar's takedown success seems to lie almost entirely therein.

After the jump we'll be looking exclusively at Edgar's striking to the takedown.

Edgar's striking to the takedown is so effective because his method of picking up his opponent's lead leg almost exactly mimics his movement when he is jabbing. Notice, in the first round against B.J. Penn how low Edgar dips on almost all of his jabs. 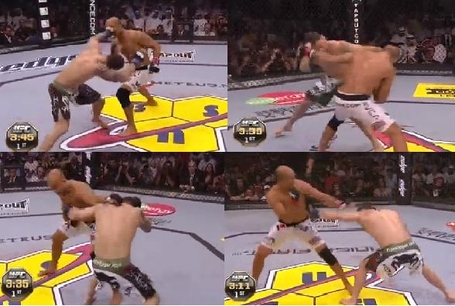 When Edgar wants to attempt a takedown he simply jams the jabbing hand into his opponent's shoulder and uses his rear hand to grip behind their lead knee. As he pushes them backward he takes the weight off of their front leg, allowing him to pick it up. Below is the first takedown that Edgar attempted against Penn, while he failed to finish the takedown, he did secure the position that he went on to utilize over and over against Penn. (G)

In the second round Edgar secured his first proper takedown, and the first anyone had secured on Penn in 6 years. As Penn came in with his trademark dipping jab, Edgar ducked under it and picked up Penn's lead leg again. This time he switched his lead hand to control B. J. Penn's neck, stepped to his left and dumped Penn towards his right. Penn being Penn he immediately jumped back up, but Edgar had given Penn something to think about and began to set up yet another of his techniques. 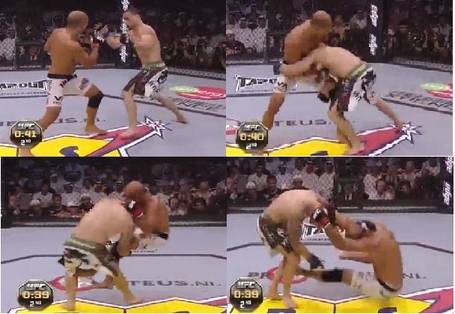 Having taken advantage of Penn's plodding footwork in the stand up to set up takedowns which he wouldn't otherwise be able to utilize, Edgar began playing with Penn's reactions to his takedowns. In the storyboard below Edgar taps the back of Penn's leg and jams his hand into the side of Penn's neck. As Penn begins to hop backward, Edgar releases the leg, steps his right foot forward while pushing Penn back and connects a hard left kick to the body. 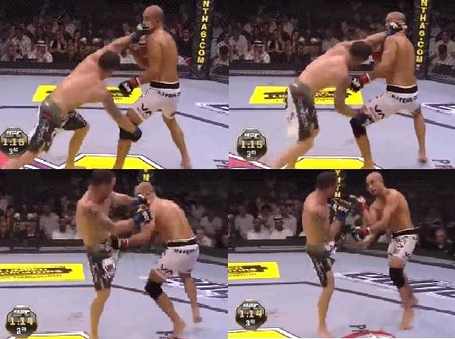 Edgar even managed to use the same technique in the rematch between the two fighters. Edgar performed this one a little quicker, barely committing to the faked takedown at all.

Here is a final look at Edgar using his single leg effectively against Penn but adapting mid takedown. Where he could have gotten stuck in the second still, as he did the first time he attempted to take Penn down in their first bout, Edgar instead opts to shuck Penn forward and drive him into the fence rather than attempting to circle Penn to his back. 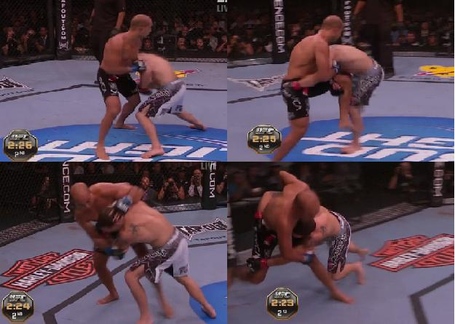 It is worth noting that the techniques above and several other signature tactics of Frankie Edgar are broken down in detail along with 70 others in my ebook, Advanced Striking.