In monday's article I spent almost 4000 words searching for a chink in Anderson Silva's armour, and came to the conclusion that the holes in Silva's game certainly require a unique skill set to exploit. I won't say a rounded skill set because almost no-one at middleweight has one of those; which is in no small part responsible for Anderson's incredible success and consistency. It seems that one needs a world class ground game or the threat of world class takedowns to force Anderson to square up to sprawl, then - while continuing to threaten with the takedown - power strikes must be mixed in. I also demonstrated that few people have ever had that much success (at least in the octagon) in closing the distance if they are in the opposite stance to Silva (or Open Guard).

Today, we will examine in more detail the technique that Chael Sonnen used to close the distance and hurt Silva numerous times throughout their bout, the rear straight. Of course, Silva had fought competent rear hand punchers before - Dan Henderson and Vitor Belfort most notably. Dan Henderson is an orthodox fighter and was therefore not able to find much home for his tremendous right hand due to the enormous distance in Open Guard with Silva, furthermore Henderson throws his rear hand in a looping swing, and is thus already handicapped in the reach of his punch. Vitor Belfort, meanwhile, despite taking Silva down off of a kick at the start of their fight, was not much threat on the ground (having done next to nothing there in MMA despite his sterling ADCC record) and Silva felt no need to square his hips up or fight a takedown defence based game. Chael Sonnen was able to nail Silva so routinely with strikes because Silva's hands were low and hips were squared to defend the shot. It was not magic, just effective variation of offence.

The truth is that Anderson isn't half the counter fighter that he is against strikers when he is squared up and prepared to sprawl. He cannot shoulder roll or put much power in his rear hand, and if more grapplers were wiling to swing punches at him they would not only be capable of landing strikes more than they expected, but also be awarded with takedown opportunities that wouldn't otherwise exist.

Chael Sonnen's use of the rear hand straight to tie up of, shoot off of, and just deal damage with is something I have been calling for more grapplers to use for a long time. The old method of jab and shoot is enormously outdated, and not technically sound, it only succeeded because of the element of surprise and an enormous disparity in wrestling abilities between competitors. Tying up or shooting off of the rear hand is an excellent way of securing a takedown or a jarring right hand, and if more grapplers opted to utilize it we would see a rise in the number of knockouts secured by grapplers and in the number of successful takedowns.

After the jump I will detail the shortcomings of "Jab and Shoot" and outline the supremacy of the rear straight.

An excellent example of the inadequacy of the jab for grapplers is visible in the match between Roger Gracie and King Mo. Roger Gracie is the greatest grappler in the world, having won numerous world titles and jammed his game of seemingly fundamental Brazilian Jiu Jitsu skills down the throats of other world class grapplers. King Mo meanwhile is a highly accomplished wrestler having won the NCAA Division II championship and numerous other accolades. Throughout this match Gracie circled and jabbed, presumably looking for an opportunity to tie up. Mo, meanwhile, kept his lead hand low and hips squared to stuff any attempts that Gracie might make to get the fight to the ground and simply parried Gracie's jab over and over with his right hand.

King Mo's boxing is technically terrible, but strategically sound, making it a damn sight better than most we see in MMA. Gracie's jab was technically sound, but he used it completely exclusively. Several times throughout the fight Gracie attempted to clinch off of the jab but it didn't work. Finally he attempted to clinch off of a jab and got clipped with a powerful right swing, and knocked unconscious with a second. The Gracies are a family who have done more for fighting than any other, by testing techniques rather than believing simply what they were told, yet the days when one could clinch off of a Royce Gracie push kick are only slightly further gone than the days when clinching off of the standard jab was effective. 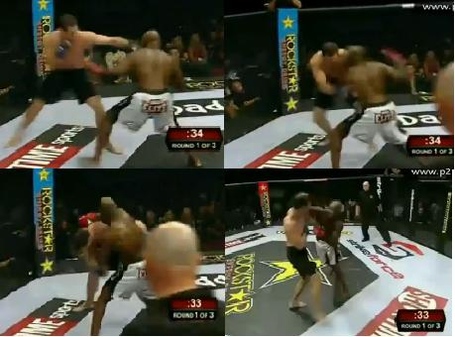 Here Gracie attempts to tie up off of his jab. Gracie, at 6'4 has an exceptionally long jab and therefore more distance to cover in order to clinch. Muhammad Lawal simply swings his right hand and catches Roger coming in.

The jab is a technique which is used for maintaining the distance against someone who is trying to tie up or swing, or it is a technique used to blind the opponent while stepping into range to throw the rear hand. It is not a sound technique to clinch off of because it is one of the longest techniques that one can land. Attempting to clinch off of the jab means charging toward the opponent, hoping to get chest to chest through a huge distance in which the opponent can punch. This is exactly what happened to Gracie. Furthermore, when attempting to jab and clinch or shoot against a man such as Anderson Silva, Lyoto Machida, Dominick Cruz, Junior Dos Santos or just about any man with competent distance management, they will be gone before the jab has been completed.

The rear hand, however, is the best technique to tie up off of, in addition to being a powerful deterrent against an opponent's overly sprawl conscious stance. The rear straight could simply be inserted after the jab to replace the bullrush attempts to clinch in many cases. Furthermore, all manner of offensive and counteroffensive options come off of the right hand - hopping to an angle a la Georgio Petrosyan, hiding behind the lead shoulder or forearm to draw a counter which in turn can be countered as Floyd Mayweather does - or weaving under the opponent's lead hand and securing the double leg takedown like the great Fedor Emelianenko.

Sonnen's enormous success against Silva came entirely from stepping in and landing his left hand. Silva was prepared to use distance and sprawl, but Sonnen's stepping in to the appropriate range with a hard rear hand straight was enough to 1) put him in perfect position for takedowns and 2) stun Silva more than anything Dan Henderson had landed did.

Notice that before stepping in behind the left straight, Sonnen attempted to strike with his jab and lead low kick, then shoot, only to have his shot evaded by Silva. 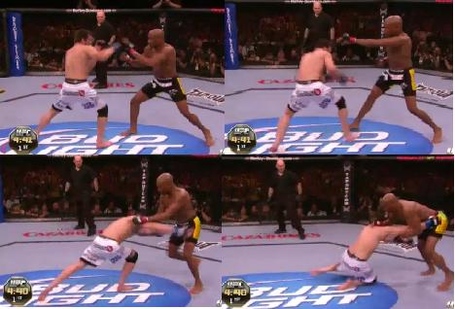 Whether this was a fake to make Silva think about the shot, or whether Sonnen was just terribly uncomfortable at this point is unclear. What is clear is that when Sonnen started stepping in behind his rear hand, he had great success. 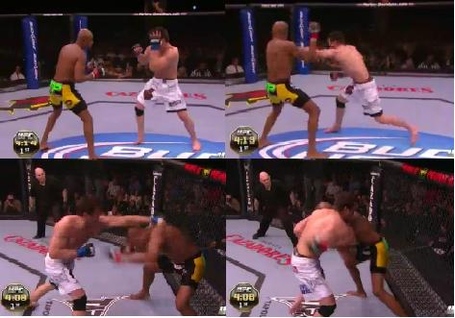 Notice in the top left still that Silva is prepared to hop back and sprawl, with his hips square and hands low, clearly expecting another shot from distance by Sonnen, this allows Sonnen's left straight to land flush, dropping the champion (top right still). After the champion has picked himself up Sonnen throws another rear hand straight against the fence (bottom left still) - which misses - but because of the proximity the rear straight requires, he is already in position to clinch up with Anderson (bottom right still). From here Sonnen worked a spurt of effective dirty boxing. Tying up off of the right hand is outlined in my ebook Advanced Striking.

Throughout the remainder of the fight the action was only briefly on the feet, and Anderson was forced to choose between staying conscious of the takedown, thereby eating the left hand, or to attempt to strike back and get taken down. Every time Sonnen threw his left hand, he ducked immediately after. It looked clumsy but in the third round he was rewarded for doing so. 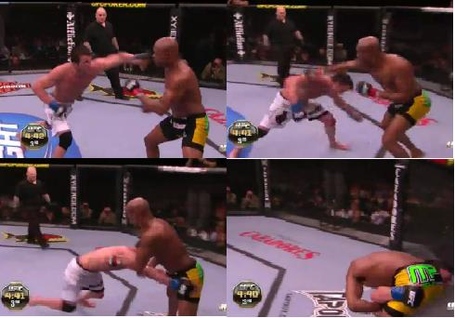 Notice that Sonnen dives in behind his left hand, and preemptively ducks Anderson's counter. This was a terrible decision by Silva as it resulted in his hips being open for Sonnen to dive through for the takedown right by the fence. What followed was another lop-sided round of ground and pound.

This technique is not new. It was brought to fame by Fedor Emelianenko who used to tie up and shoot off of his powerful right hand all of the time. It is an indication of how far ahead of his time Fedor was that Sonnen's is one of the few notable appearances of the rear hand lead - weave - takedown / clinch technique not performed by Fedor himself.

Tying up off of the rear hand is an enormously underutilized technique in ALL combat sports, and one that I have been praising, teaching and refining for a while. Grapplers often go through a phase of hunting for knockouts as they try to become better strikers, but in all honesty we would see a great many more if they simply learned to punish their opponents while forcing them to sprawl, rather than turning fights into mediocre kickboxing matches.

Chael Sonnen has shown that he can mix in power strikes with his world class wrestling game, and this alone is enough to give Anderson Silva fits - whether he can shore up his submission defense so late in his career is another matter.