The use of elbows differs greatly between different martial arts. The type of elbow thrown and the intention behind them can often be very different. So in MMA there is likely to be a great diversity in how elbow strikes are thrown. In MMA elbows are a very important strike used both whilst standing and on the ground and due to the mixed origin of fighters their elbow strikes can differ greatly. In this fanpost I will examine the various types of elbow strikes used.

Firstly I would like to point out that I am not an expert in martial arts. My experience is limited to 4 years of Tae Kwon Do (International TKD as opposed to the Olympic style TKD), 2 years of Wing Chun (a more modern version than the traditional school taught) and a very brief time learning Muay Thai. Of these only Wing Chun and Muay Thai regularly used elbows, but even between these two schools the styles were different.

In Muay Thai, one of the more common ways to use elbows is to cut the opponent. By cutting the opponent you will be able to end the fight quickly and effectively by obtaining a TKO due to cuts. At 0:50 in the video here we can see the type of elbows used that can cause cuts.

Cut with elbows (via BuddhaiSwan)

As can be seen in the video the type of elbow used are short, over the shoulder quick elbow strikes to the head of the opponent. These strikes are meant to graze the head with the point of the elbow. By doing this they maximise the chance that a cut will be caused. In the fight shown it appears that the fight is called off shortly afterwards due to a severe cut caused by these sharp grazing elbows. In MMA it is interesting to see that this technique appears a little rarer than in Kickboxing where it is one of the more common ways of winning. In fact in a post on Sherdog by "emperor", between 1st January 2012 and 30th May 2012 there have only been 6 cases of stops due to cuts with only 2 of these being directly because of elbows (Cro Cop vs Perosh and Neer vs Wisniewski).

However, there is one practitioner of elbows with the intention to cut in MMA, Kenny Florian. Florian is well known for the sharpness of his elbows and their propensity to cause cuts. For example in his fight against Alex Karalexis at UFC Ultimate Fight Night, one of Florian's elbows cut Karalexis' nose, which later resulted in the doctor's stoppage. This can be seen in the video below:

As can be seen, this type of strike is similar to the type thrown by the Muay Thai fighters in that it is a quick strike that just grazes the nose and causes the cut. In addition to this type of strike Florian is well known for throwing elbows off his back whilst in guard. He often throws these elbows with the intention of landing them on the top of the head where they can do damage, but primarily to cause cuts. This can be seen in Florian's fight with Joe Lauzon in the GIF below:

However, whilst these grazing elbows are the intention of many of those in the Muay Thai world, this isn't to say that all elbows in this martial art have this intention. Below is a video showing KOs caused by elbows:

The difference between the elbows in this videos and those looked at previously are massive. The elbows that cause the KOs, land with the fighter's full force behind them and often had directly to the jaw of the opponent. In addition, unlike the cutting elbows, they don't brush off the skin of the opposing fighter but instead strike through them. By doing this the full power of the strike is pushed into the opponent thus causing more than just surface damage.

In MMA this type of strike is becoming more popular with increasing numbers of (T)KOs being caused by such strikes. The most recent example of this would be Chris Weidman vs Mark Munoz in which Munoz was heavily rocked by an excellently timed elbow thrown by Weidman and then followed up by several punches on the ground, seen in this GIF:

In this case the elbow was a perfectly timed counter to Munoz's punch. Weidman ducked underneath it and landed as Munoz stepped in giving the strike even more power. Jack Slack already has analysed this particular strike in detail here: Jack Slack.

The basics of the strike however are that it is a short over the shoulder elbow that lands squarely on the nose of Munoz but the important thing to note about such elbows is that damage is often hard to cause with such a strike unless one of the fighters is stepping in. In this case Weidman is mostly stationary but Munoz walks straight into it causing extra damage, a knockdown and setting up the TKO victory. In an interview following the fight, Weidman told reporters that this strike had in fact been practice specifically for this fight based on some of the striking that Munoz had shown in the past, so whilst this strike worked in this situation, it is very possible that it wouldn't work for other styles of fighter.

Standing elbow strikes are now become more and more common as fighters are starting to realise their effectiveness as more than just a tool to cut the opponent. This is occurring as more fighters from a non Muay Thai background are starting to learn such strikes and then adapting them to work better for their style. Below are some examples of the effectiveness of standing elbows:

This GIF depicts Nick Denis knocking out Joseph Sandoval with repeated elbows to the head. Denis has Sandoval in the tradition Muay Thai (Plum) Clinch at first before releasing one hand for a single collar tie. From this position Denis controls the posture of Sandoval with his left hand and throws repeated horizontal elbows to the temple and ear area of Sandoval. These strikes are clearly thrown to cause more than just superficial damage and it is clear that he is not aiming for the head, but he is aiming it beyond it. In addition to the motion from his striking arm, his left arm is whipping the head of Sandoval towards his own elbow, similar to Anderson Silva pulling Rich Franklin's head down in the Muay Thai clinch to land vicious knees as seen here:

Other than the examples given here there are a few other examples where standing elbows have been used to cause serious damage. Most notably in the fight between Anderson Silva and Tony Fryklund, Silva threw an upward elbow strike as shown here (watch from 2:00):

For an in depth analysis of this strike please refer to this Judo Chop by Nate Wilcox. Aside from the examples given above there have been many other cases where standing elbows have been used to great effect such as in Ivan Menjivar vs Charlie Valencia and the many spinning elbows of Jon Jones.

We now move into the effectiveness of damaging elbows (as opposed to cutting elbows) on the ground. Elbows on the ground is one of the more contentious rules in the Unified Rules today, with many fighters including Bas Rutten and Nick Diaz claiming that they damage the sport and prevent the use of more technical grappling. However the strikes that these are often referring to are weak shots that cause very little damage overall. I will however be considering the more aggressive elbow strikes. Firstly we have one of the most brutal usages of elbows ever in the fight between Gary Goodridge and Paul Herrera.

This early UFC fight was one which very clearly showed the devastation that elbows on the ground could cause with Goodgridge knocking Herrera out in brutal fashion. He does this by repeatedly striking the head of Herrera and is using the fact that he is securely trapped between his body allowing him to get large amounts of leverage and striking for the temple area, thus causing a quick KO. 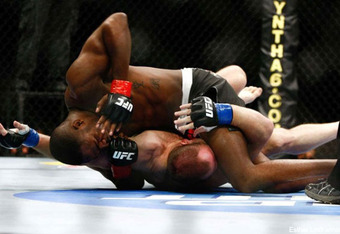 Another major practitioner of elbows on the ground is Jon Jones who has used them to great avail throughout his career ending fights with Matyushenko, Vera and O'Brien (the elbow set up the submission). His fight with Matyushenko is described in this Judo Chop in which Jones used a form of the Salaverry position to trap Matyushenko before raining down countless elbows. However we will look at the elbows he used against Brandon Vera here:

As can be seen in this strike Jones torques his elbow in a downward/over the shoulder motion. By doing this he gains a lot of power in his strike. This is in some ways similar to the strike by Weidman against Munoz. Earlier in this fan post it was mentioned that standing elbows don't cause large damage unless one of the fighters is moving forward into the strike, however whilst on the ground it is far more difficult for the bottom fighter to move and it is this restriction that allows Jones to get so much torque and power into the strike. Also Vera's head doesn't have anywhere to travel after being hit and it is clear that Vera strains to ensure that his head doesn't smash against the mat after being hit by the elbow.

What is incredible though is the fact that Jones is able to develop so much power with this strike from the closed guard as this is not traditionally a position in which it is easy to strike effectively from as the top fighter often has to be weary of sweeps and occasionally submission attempts from the bottom fighter. This elbow strike followed by a few punches led to the TKO victory for Jones and in fact these strikes broke Vera's orbital bone.

Now compare these elbows to those thrown by Florian in his fight with Joe Lauzon:

Here Florian is postured up in the mount position and is throwing elbows from the top whilst Lauzon is strying to bridge up and escape. From the mount Florian is throwing elbows to the head of Lauzon, however the unlike Jones' strikes, Florian's have a different intention. Once again, Florian is using his elbows to graze rather than KO. This difference can be easily seen to Jones' elbows as his strikes are dropping straight down with relatively little wind up rather than dropping in an over the shoulder arc. The strikes also keep sliding off the top of the head of Lauzon. By doing this, the power of the strikes isn't being transferred to the head of Lauzon and instead only the sharp point of the elbow is used to cut the top of his head. In addition Florian once again isn't striking so that his elbows are aiming through his opponent's head which leads to less power overall. This is disappointing because from the mount position if Florian could have secured it better so that Lauzon would have found it more difficult to escape, he would have made vastly more leverage than from the guard position to land fight finishing elbows. However, in this case shortly after this elbows Lauzon was deemed to not being defending himself well and Florian won via TKO.

So as can be seen, elbows in MMA come in many different forms both on the ground and whilst standing, with some fighters preferring to use them as a way to cause cuts and lead to a doctor's stoppage, whilst others use them to lead towards a (T)KO victory. Thank you for reading and please leave comments below. 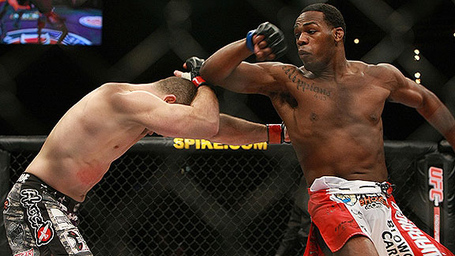