Share All sharing options for: UFC 149 Judo Chop: Renan Barao Is NOT The Bantamweight Jose Aldo

Renan Barao has set the UFC 135lbs division on fire with his exciting stand up and slick Brazilian Jiu Jitsu and has drawn a great many comparisons to UFC featherweight champion and fellow Nova Unaio fighter, Jose Aldo. One source of these comparison's has been the UFC's resident soundboard, Mike Goldberg, who likens Barao to Aldo at least once a round. While many of these comparisons have been drawn due to their similar reliance on striking despite owning arguably the best Jiu Jitsu in their respective divisions, Barao is not a carbon copy of the featherweight champion, and certainly won't provide the same test to Urijah Faber that Aldo did. Barao's stand up differs greatly from Aldo's and he brings strength and weaknesses in different areas - where he brings longer combinations and greater variance in his kicks, he also lacks head movement and the crisp boxing of Aldo.

In today's judo chop we will compare and contrast the highly touted striking of Jose Aldo and Renan Barao, to determine whether the likenesses will have any baring on Barao's meeting with Urijah Faber. This analysis will focus on:

The first notable difference is in the boxing of the two men; Barao is much more willing to work behind the jab than Aldo. Where Aldo throws almost exclusively two punch combinations, using a jab or right straight only to blind the opponent momentarily to the second punch, Barao makes extensive use of a stiff jab on it's own. This was most evident in the Scott Jorgensen match, where Renan Barao repeatedly hit the shorter man with hard jabs.

Aldo does like to try to use the jab, but he is nowhere near as strong with it as a real punch as Barao is, and it functions far better to hide his right uppercut as Manny Gamburyan found out. Aldo's lack of an forceful, technical jab showed most notably in his fight with Mark Hominick. Aldo pumped the jab throughout the entire fight, but it looked slow and lacked the power of his other punches - in fact after the second round Hominick began countering Aldo's jab almost every time the champion stepped into range with it. 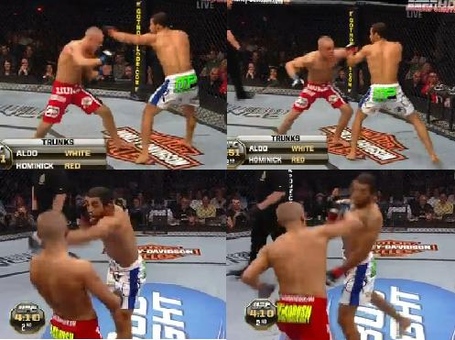 In the above storyboard you will notice Aldo push out a jab as he is moving backward, and Hominick counter with a left hook to the chest (Hominick's bodywork in this fight really paid dividends). In the bottom two stills you can see Aldo throw a jab with his head straight upright, across his own body, and drop his hand after he completes it - which Hominick counters beautifully and went on to skip into an angle on the champion. This is not to say Aldo is a bad boxer, Mark Hominick is a hundred times the striker that Scott Jorgensen is, but the holes in Aldo's jab simply aren't as obvious in Barao's. Barao doesn't often drop his hand after he jabs, and his constant shoulder shrug which looks bizarre actually serves to keep him safe as his chin is always between his lead shoulder and rear hand. When Barao jabs it is with an authority which the harder punching Aldo seems to lack in this single technique.

Where Barao's boxing game does suffer is when he begins to throw more than one punch. This often devolves into wild flailing and his head stays perfectly still while completely erect. This defect was most noticeable against Brad Pickett, but was also obvious at points in the Scott Jorgensen fight when Barao wanted to follow up on his jab. 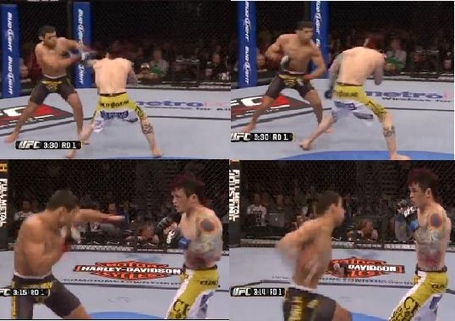 In the top left and bottom left stills Barao has thrown jabs that just missed, in the stills on the right hand side you can see how he leaves himself wide open with his chin sticking out as he tried to follow up. A great example of how off balance and out of position Barao is in exchanges is the entire fight with Brad Pickett. Renan Barao stuck behind his excellent jab for much of the fight but also opened up in wild exchanges with Pickett. 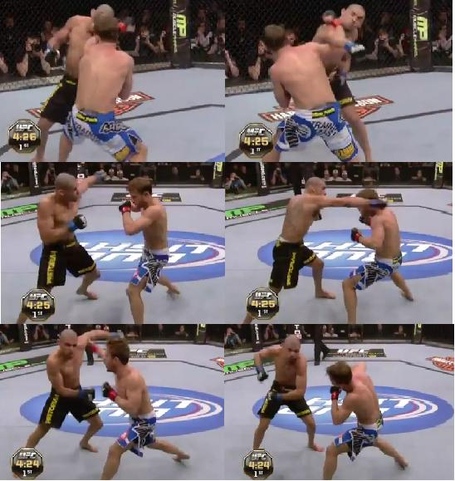 Notice in the top two stills how Pickett's head movement enables him to hit Barao hard as Barao is flailing with his hands low and his chin up in the air. In the middle two stills Barao swings a left hook from way outside of his centreline - inviting a counter which does not come, then misses a right straight with his left hand down by his nipple. In the bottom two stills he swings another wide left hook and misses, leaving him drastically off balance just as he was against Jorgensen.

Barao does so again later in the round, running forward with a combination as Pickett retreats, with his head completely erect at all times. I suggest skipping to 4:54 to watch this. While it is necessary to be upright to throw the knee strike, Barao's hands still show a remarkable lack of discipline in this flurry. It seems strange that such a disciplined and versatile jabber would become so wild and sloppy in combinations - in this sense is is the polar opposite of Jose Aldo - whose basic 2 and 3 punch combinations are beautiful to behold as he dips his head offline and returns with a powerful hook or uppercut.

I could hand pick some examples of Jose Aldo using head movement but his head movement is pretty evident in all of his fights which I'm sure most fans have seen. Rarely using the jab well, Aldo's modus operandi is to dip his head to his left (sometimes throwing a right straight) and then to come back with the left hook. Aldo's other go to combination is of course the flicking jab to swinging right uppercut, which has proven incredibly dangerous to wrestlers whom he uses the jab to bait in (such as Manny Gamburyan).

Effective kicking has been the main cause of the comparison's between Renan Barao and Jose Aldo, both of whom use kicks to tenderize their opponents lead legs and to punish wrestlers for their crouching posture. Both fighters also throw inventive standing knees, taking advantage of their height and flexibility, as well as great comfort in their takedown defense. What we will focus on, though, is Jose Aldo and Renan Barao's concern with set ups. Jose Aldo's kicks are often set up with combinations, most obviously the 2 - 3 - low kick (right straight, left hook to the body, low kick) that he utilizes in almost every round of every fight he enters. Aldo is so effective with this technique, threatening three levels of the opponent, that he can simply use it over and over against most opponents. In the variation below, against Mark Hominick, you can see that Aldo skips the right straight and instead simply dips his head offline and comes back with a left hook to the body. 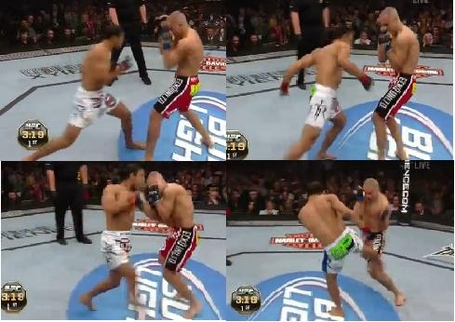 Due to Hominick needing to square up to defend the left hook, he has little power behind a prospective right hand, and his weight is on his lead leg, making it hard for him to lift up the leg to check. In any Jose Aldo match, you won't have to wait long to see this technique.

Renan Barao, on the other hand, does NOT set up his kicks well. He kicks from his stance almost exclusively and, while he has yet to get in trouble for it, the openings are obvious. Watch as here, against Scott Jorgensen, he throws a low kick from far too close in, without a set up, and almost gets countered. 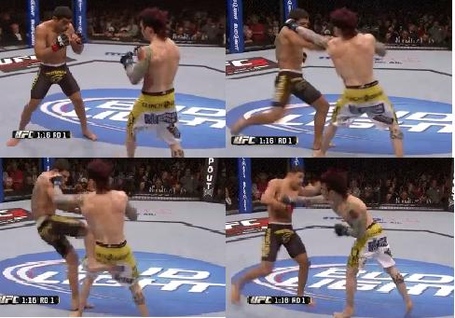 Before the first still, Jorgensen had been backing up, Barao walked him down and attempted a kick. The jab which Jorgensen threw missed Barao (who was in good kicking posture rather than upright), but Barao's shin lands almost on Jorgensen's hip bone - this would be exceptionally easy to catch and certainly a far less pleasant connection for Barao than against the soft, thigh muscle (many boxers have broken their hands on their opponent's hips, and while it is rare in kickboxing, kicking the hip bone rather than a muscle can hurt the shin and just isn't a great idea). You will notice how easy it would be for Jorgensen to pick up the kick were he not attempting to punch at the time. Jorgensen lands a glancing right hand on Barao as the latter recovers, highlight the dangers of leading with a kick.

Aldo also leads with kicks from time to time, even against great wrestlers like Urijah Faber and Mike Thomas Brown, but he does so from an appropriate distance, when his opponent is unlikely to come back with punches. He also makes amendments to his kick to maintain his safe position on the outside. 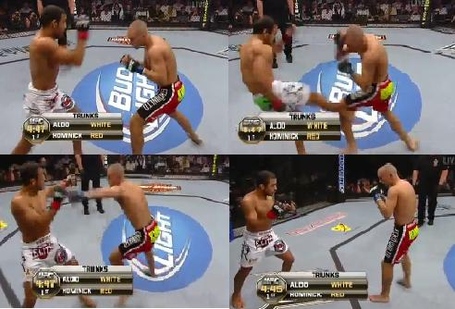 Notice that Aldo, against Hominick, does not step forward but rather kicks straight from his stance in almost an upward motion, holding his hips back rather than turning them through as Barao did. He connects with the end of his shin and leg, but is nowhere to be found when Hominick, a much better striker than Scott Jorgensen, attempts to throw punches back at him. Were Barao to kick as he did against Jorgensen against a competent striker such as Hominick, he could find himself on the losing end of the exchange.

The hazards of kicking from too close in, without set up, and over committing, may catch up with Renan Barao in his meeting with Urijah Faber at the end of the week. Furthermore his lack of head movement, tendency to swing wild, and good form on the jab alone may hurt him against Faber - who has used an inside slip and right hook against much better jabbers than Barao such as Eddie Wineland. That said, his takedown defense has looked every bit as good as his training partner, Jose Aldo, and he certainly has the power in his kicks and inventiveness of Aldo. The comparisons of the two are pointless, however. Renan Barao and Jose Aldo both have had massive success in the stand up, however while Aldo is a power punching low kicker, Barao is a jabber who does not set up his kicks well and over commits in exchanges. Meanwhile, Barao has a far better jab than the featherweight champion. Even if Barao is to win the Bantamweight title, he will be the Renan Barao of that division, and not its' Jose Aldo.

As always, gif it up in the comments and rec all gifs so they're good and visible!

Support Jack Slack by picking up his ebook, Advanced Striking which outlines and demonstrates the unique techniques of 20 elite strikers from Boxing, Kickboxing and MMA.