This is being cross-posted from Cageside Seats. Although it deals mostly with (shudder) professional wrestling, it also examines the forces that changed it from semi "sport" to pure spectacle. It also looks at the lives of one of the most important and influential men in combat sports history. So if any of that interests you, read on. 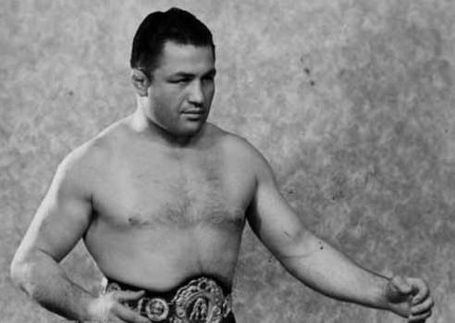 "When the legend becomes fact, print the legend."

"Professional wrestling... has no history, only a past."

-The Phantom of the Ring

Today, June 30th, marks what would have been the 122nd birthday of one of -- if not the -- most famous, most important and most influential wrestlers to ever set foot in the squared circle: Ed "The Strangler" Lewis.

Born Robert Friedrich in Nekoosa, Wisconsin in 1890 to German immigrants parents Jacob and Mary Friedrich, Robert, or Bob as he preferred to be called, grew up big, strong, and athletic. He also quickly developed an interest and aptitude for wrestling, entering the professional ranks in his early teens by competing in "shooting" matches in which supporters would wager on him defeating men a decade or two his senior. Usually he came out the victor but in Grand Rapids, Wisconsin on January 3, 1911, he bit off more than he could chew when he took on former champion Fred Beell. Bob couldn't do anything with his opponent, who toyed with him for 7 ½ minutes before choking him out with a reverse headlock. In the second fall he did a little better, surviving twenty-two minutes before being pinned. Afterwards Beell told the audience that Bob would one day be a champion. For his efforts Bob receive $25 and a neck which he couldn't move for two weeks.

After the Beell contest Bob left behind the world of small-time traveling carnies and side-room challenges for that of big-time professional wrestling (which was more often than not the world of "worked" contests instead of "shoots").

One of his first jobs in this new career was for promoter Bill Barton who arranged a match between "Bob Frederick" and Bill Demetral in Louisville, Kentucky. Unfortunately, Bob never got news of the contest because Barton had mistakenly mailed the details to the wrong address. When Bob failed to show for the heavily promoted event Barton held the match anyway, but with Bob Managoff stepping in and wrestling as "Bob Frederick".

A week later, the real Bob Frederick (Friedrich) showed up in town ready to meet Demetral. Since the audience had already seen Frederick (Managoff) wrestle, Barton decided that Bob would need a new name. The one they came up with was Ed "The Strangler" Lewis, in honor of the former champion (and fellow Wisconsinite) Evan "The Strangler" Lewis.

More after the jump... 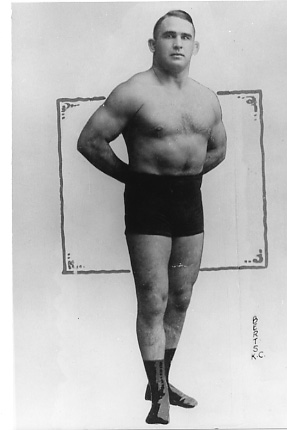 On January 24, 1913 Ed "The Strangler" Lewis wrestled for the first time in Louisville, defeating (in a match loaded with symbolism) none other than Bob "Managoff" Frederick. For the next half-century he would be billed as "The Strangler", infamous for at first his stranglehold and later (since the stranglehold was banned in most matches during this period of "legitimate" wrestling") the headlock.

A year later an equally important event took place in Lewis career: the acquisition of Billy Sandow as his manager. Sandow was smart, ruthless, and had strong connections in the business, especially those to his brothers, Max and Jules Bauman, who promoted out of upstate New York and Savannah, Georgia respectively. Sandow was just the person to help Ed reach the top, and Lewis with his combination of skill and charisma, was just the man he could take there. A handshake signaled the start of a relationship that would have a massive impact on the "sport" and business of professional wrestling.

With Sandow as his manager and with the new name of the Strangler, Lewis quickly moved up the ranks of professional wrestling and within a couple of years was one of the top men in the heavyweight division. But even with his success and with Sandow pushing him relentlessly he still found himself stuck in the position of contender behind the other members of the "Big Four" of the era - Earl Caddock, Joe Stecher, and Wladek Zbysko. The truth is, even during this period when it wasn't a completely legitimate (or even close to legitimate) sport, "shoots" were still common enough that skill dictated your position. And as good as Ed Lewis was he still wasn't the best. Caddock "the Man of 1000 Holds", had wrestled rings around Lewis when they met - although he had been unable to pin him. Wladek, who Lewis genuinely disliked, drew with him in what were some honest to goodness "bad blood" matches.

Against Stecher, the man who would prove to be his greatest rival inside and outside the ring, Lewis failed to defeat him in their first title match, which took place on July 4, 1916. It's noteworthy not only for the participants but for also being truly one of the worst matches in history. For almost five hours, Lewis basically ran from Stecher, refusing to engage until the match was declared a draw. Arguments still rage if this was a "work" or "shoot" but in either case most agreed that Lewis wasn't in the same class as Stecher. 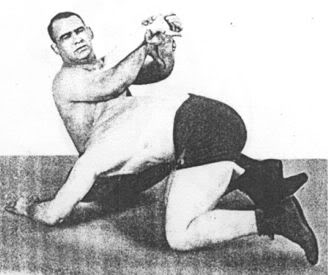 Fortunately for Lewis and Sandow they wouldn't have to beat Stecher for the title, instead winning what was then known as the "Olin title line" from John Olin on May 2, 1917. With a title in their hands Sandow and Lewis formed a wrestling trust that radically transformed professional wresting. (Known in later years as the "Gold Dust Trio" a name that was never used in the 1920s but instead coined in 1937 by Marcus Griffin in his book Fall Guys. In his muckraker he also elevated the policeman Toots Mondt to a position of equal with Lewis and Sandow.)

It was this new Trust, which included Lewis, Sandow, his brothers Max and Jules, and other promoters across the country, that solidified control of professional wrestling in the United States and soon transformed the way it did business. It was they, according to Griffin, who introduced the terms "shoot" (referring to a real match) and "worked" (denoting one where the wrestlers were merely putting on a show for the audience) and who moved wrestling away from its presentation as legitimate sport into one more akin to carnival shows. Programs and story-lines became integral to the business, as a variety of "screw-job" endings were used in match after match, building "heat" for a big payoff. They disregarded even the illusion of authentic wrestling, instead introducing the fast-paced, acrobatic "Slam Bang Western Style Wrestling". Now, instead of long grueling technical matches where double-wrist locks and half-nelsons were the norm, fans were treated to fast paced contests where such moves as the Irish-whip into the ropes, drop kicks, and airplane spins would be exhibited. With the new rule and new style the doors were opened to non-wrestlers to enter the business, and soon strongman, ex-football stars, and ethnic heros with little or no true wrestling background were entering the ring and finding success. Within a decade of the Trusts rise to prominence professional wrestling was no longer viewed as a sport, but merely a form of entertainment.

You can read the rest at Cageside Seats or by clicking here.