UFC on FX 3 brought little in the way of striking clinics, but one of the stand out performances on the feet of the event was Eddie Wineland's masterful dismantling of the dangerous wrestler and one time top contender, Scott Jorgensen. Of course Wineland benefited from a height, reach and experience advantage in the striking exchanges, but he also benefited greatly from Jorgensen trying to jab his way forward technically rather than just running in swinging. Of course no coach is ever going to tell his fighter to abandon the jab and swing, but Jorgensen's misplaced discipline in sticking to the clearly ineffectual jab even when he was being countered violently was severely damaging to his performance in this match.

As a general rule, technical fighting is entirely based on the jab. Good offensive fighters tighten up their methods of landing it cleanly and following up on it. Good counter fighters work specifically on ways to counter the jab more than any other punch. If the jab, as it is taught today, were anywhere near as safe as coaches lead their charges to believe it is, counter punchers would not have such success dropping and stopping their opponents off of the jab. Men like Anderson Silva would have half their game taken away from them if their opponents devoted as much time studying new ways to lead as Silva spends designing counter attacks for standard offenses.

Last night Scott Jorgensen was a victim of this cult of the jab. A short fighter, with a reach disadvantage, he plodded forward behind single jabs, with his body upright. It is fine to move in behind single jabs, but a certain form is required to do it successfully. If attacking with a jab it is important to dip to one's right, taking one's head offline of the opponent's straights, and dipping the head below the lead shoulder to prevent an overhand swing or "Cross Counter". Notice the difference in posture between Wineland while jabbing on the left side of the storyboard (moving his head off line), and Jorgensen on the right side (upright, lead shoulder low and lunging out of his stance to connect). 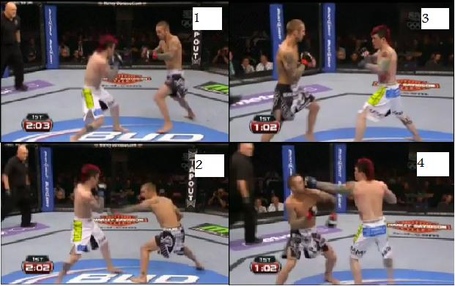 This dipping jab was largely responsible for the success of the two most technically perfect boxers of all time: Sugar Ray Robinson and Joe Louis. When the upright jabbing Muhammad Ali finally met someone who was willing to trade him jab for jab in Ken Norton, he fell victim to the dipping jab. If one fighter is using dipping jabs and the other is using upright jabs, the dipping fighter will almost always win the exchanges because his head is off line.

Early in to the fight, Jorgensen's natural speed caught up with Wineland as he was midway through re-establishing his stance (Frame 1) when Jorgensen threw a jab. Without the time to dip, Wineland traded jabs with Jorgensen and ended up still coming out of the exchange better because of his reach (Frame 2). This would make most fighters realize that they could trade jab for jab and come out better, and that's exactly what Wineland did. In Frame 3 he establishes his fighting stance as Jorgensen is about to attack, and in Frame 4 he ducks his head to the elbow side of Jorgensen's jab and delivers his own jab. This is exactly the same counter that Anderson Silva performed on Yushin Okami, which we examined in our last Judo Chop. 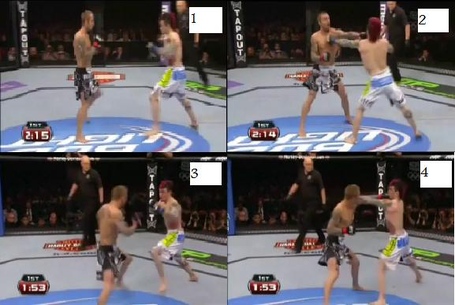 The fault, however, was entirely with Jorgensen and his corner. Between rounds his corner men repeatedly spouted lines about moving in behind his jab, as did Kenny Florian on commentary, judging that "doubling up" the jab would make it easier for him to get in and take Wineland down. In fact this would make him no less likely to be countered as his jab was still thrown from an upright posture. As the fight went, Jorgensen's moments of effective offense came when he launched in behind rapid, unpredictable combinations which put Wineland off of countering - and Jorgensen was able to score a takedown and cut Wineland's face.

When they got back to the feet however, Jorgensen ate some more jabs due to his upright offense, became timid and got caught with a beautiful jab - left hook - straight right set up. In Mixed Martial Arts, more so than in boxing, moving the head off of the centre line when leading with a jab is the most important offensive principle. Small gloves cannot be caught in the palm as easily as boxing gloves, so upright posture and trying to catch the opponent's counter jab just will not cut it.

A slightly more interesting and advanced way to counter upright posture, which will work against more adept strikers, was demonstrated a few weeks ago by Duane Ludwig against Dan Hardy. Hardy is a competent offensive fighter, while Ludwig represents a great counter striker. In an attempt to convince Ludwig that he owned more than a left hook, Hardy came in behind a jab. While he was retracting it, however, Ludwig hit Hardy with his signature counter right straight. This is not a counter you will see that often, but Ludwig has had great success with it throughout his kickboxing career.

In the left frame Hardy throws his jab and it falls short. Notice how his lead shoulder is up, in good position, but he is still upright (this is because an upright posture is needed to throw the left hook which Hardy is known for). As Hardy retracts his hand and begins loading up his left hook, Ludwig lands his short straight right.

If Hardy wanted to land the jab effectively, a dipping jab would have worked far better, as Ludwig's right hand would have connected with Hardy's left shoulder rather than his jawline.

Pumping the jab ineffectually is something that we can look forward to in MMA for many more years as boxing coaches continue to preach to their clients that "it's all about the jab" and "it's the safest weapon", then repeat this advice in the corner between rounds as their fighter is getting handled by a counter puncher. We will, however, continue to see cracking counter punches as demonstrated by Wineland in dropping Jorgensen or as Silva used to drop Okami. Occasionally we will also be treated to an elite level counter punch, such as Ludwig's moment of efficacy against Hardy.

Please support Jack Slack and pick up his ebook "Advanced Striking: Tactics of Boxing, Kickboxing and MMA Masters" which breaks down over 70 striking techniques of 20 of the worlds top fighters in great detail. The techniques of Fedor Emelianenko, Anderson Silva, Alistair Overeem and Junior dos Santosare all present, along with many others.