Anderson Silva is legitimately argued to be the greatest MMA fighter to date. This is, of course, subjective due to level of competition and questionable performances such as his refusing to engage Demian Maia. He is, however, hard to dispute as the most elite striker working at the top levels of MMA today. Something that people tend to forget, especially those who lack a pedigree in striking martial arts, is that unlike UFC Undisputed - striking is not simply a fixed attribute in the real world. Every exchange must be thought out, and no man can sit back and coast - no matter how much he tries to make it look that way. Anderson Silva then is anything but infallible - and he certainly makes mistakes - but to the educated fan, this makes his technical clinics even more impressive.

Anderson Silva, like Manny Pacquiao and Floyd Mayweather, is one of the few professional fighters in ANY discipline who has the mental discipline and physical endurance to mind his Ps and Qs 90% of the time. When Anderson enters with a flurry, it is rarely without a jab, hand trap or feint preceding it - eliminating the opponent's direct counters for an instant. When he is done with his attack, he almost always dips, slips or sidesteps on his exit - rather than simply standing up and stepping back. His rigorous conformity to what I (for lack of an official term) teach as The Pattern of Offense (Pre-Entry, Entry, Strike, Exit) has made him one of the least hit MMA fighters of all time, while simultaneously one of the most prolific knockout artists in UFC history.

Knowing how to do this is one thing - many fighters do not - but even those who do, get sloppy from time to time. This week I've been examining Fedor Emelianenko, whose technical trickery borderlines genius, but whose discipline in the pocket has been known to waver when he smells blood. Anderson's discipline and the demands he places on himself throughout the fight almost make it seem as though the thought of losing to his opponent is less offensive to him than the thought of striking incorrectly.

There is so much to be said about the striking and overall game of Anderson Silva, and believe me, I will try in vain to say it all over the coming months and years. Today, however, we will focus on my favourite two facets of his most recent performance against Yushin Okami. These will be:

Yushin Okami should, on one level have been an enormous threat to Anderson Silva. Anderson's takedown defense stems from standing in a side on southpaw stance against Orthodox wrestlers, thereby forcing them to take an incredibly long shot to control his hips for a double leg takedown, which almost always ends with them giving up and going after the single leg takedown, which can be defended much more technically than the power double. Against Chael Sonnen, a southpaw wrestler, Anderson found himself being taken down with the double leg shot all night. Fans can claim that rib injuries prevented his movement, but Anderson had never had to deal with such a strong southpaw wrestler before. Okami did not have the wrestling ability of Sonnen, but he certainly should have been able to shoot doubles all night and keep the champion struggling.

On the other hand, Yushin Okami was in many ways a perfect opponent for Anderson from the striking stand point because he is a fellow southpaw whose only notable offense is his jab. Anderson Silva, a right handed southpaw, does not often get the chance to use his more dexterous right hand as a direct counter, that is a counter thrown simultaneous to the opponent's attack. Instead, he has to settle for using his weaker left hand as a direct counter to his orthodox opponent's jabs (which he does often) or using his right hand as an indirect counter - which is a counter that is thrown as the opponent is retracting his attack - such as the right jab he finished Forrest Griffin with as Forrest retracted his left hand (click).

Against Okami, Anderson repeatedly threw an "overhand" or "dipping" jab - which serves as a direct counter. If an opponent in the same stance as oneself attempts a punch every time one steps in, the dipping jab serves as a preemptive counter; taking the head off line and below the lead shoulder, while attacking with the longest technique in a fighter's arsenal. Anderson threw dozens of feints and non-committal attacks throughout the Okami fight, but he repeatedly came back to the dipping jab. 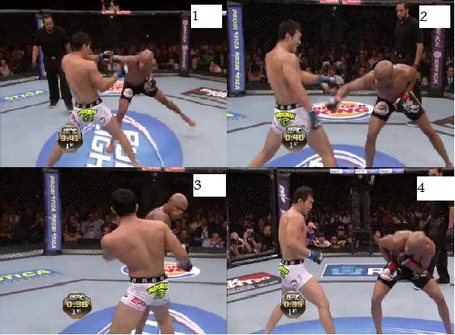 Notice how the degree of dip varies, and Silva repeatedly pulls his rear foot up behind him in a very bladed, narrow stance, hoping for Okami to throw something back. Frame 1 and 2 are examples of Anderson using the dipping jab throughout the first round. In Frame 3, Anderson has just landed a biting jab, dipping his head to his left, then drops down into a deep crouch in Frame 4. Anderson hopes that Okami will throw a retaliation that will bounce off of Anderson's back and shoulder, which is tucked up against his jaw. From this position Anderson could come back with a left straight or uppercut with amplified force from his crouch - but Okami continues to offer no response, preferring to work almost exclusively in defense and straight forward offense when Anderson is finished attempting to counter.

Once Anderson had hurt Okami with the high kick (discussed next), Okami was much more nervous and obliging in his attempts to hurt Anderson. 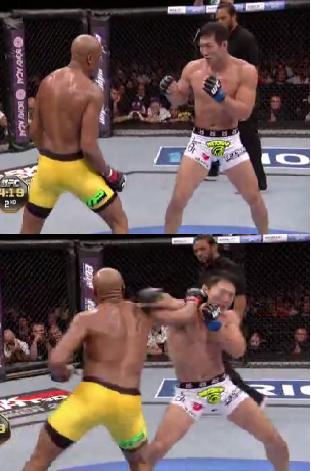 Silva had been building confidence and comfort throughout the fight, and began to inch closer to Okami each time they met in the middle of the octagon. Finally, Silva was almost knee to knee with Okami, with his hands low, ready to punch but inviting Okami's lead. Okami inevitably reached out with the predictable jab that has come to represent his stand up style, and Anderson slipped (quite shallowly) to the outside of it and landed his own, hard jab, sending Okami to the deck. This simple dipping jab can be a knockout punch used by anyone, and is the basis of all offensive counter punching and the first counter technique one should learn. Anderson simply demonstrated what a lifetime of practice can make of this already effective technique.

Please note, the hands down stance is a very safe choice against Okami. Okami had proven himself to be a one handed puncher, and his rear hand was not fast enough to lead with. Further to this he took a plodding step in with every jab, just as he would have to take a plodding step forward at 45 degrees to throw a high kick. By positioning himself on the end of where this step would be, and throwing the dipping jab, Anderson had prepared a counter for any punch Okami threw, and the left high kick.

The only things Okami could have done to prevent this counter were:

- Step out of range and utilize more foot movement to prevent Anderson from simply establishing himself in countering range again.

- Switch and throw front leg high kick or knee - but this takes foot speed that Okami just has not shown.

At the end of the first round, Anderson landed a high kick against Okami's head that had the latter reeling. Anderson Silva is not an incredibly flexible athlete like Mirko Cro Cop, and so sets his kicks up extremely well to assure they land, rather than just throwing them up effortlessly from anywhere in the cage. 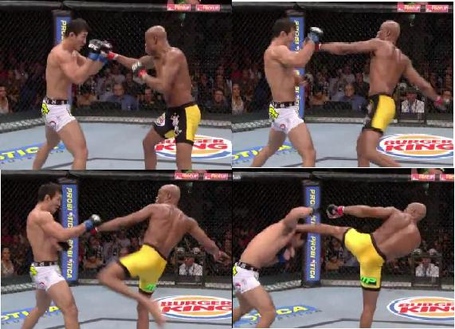 Anderson had become accustomed to Okami attempting to parry Anderson's initiating strikes. As with most of Anderson's techniques, the secret here was to take a small movement Okami was making, and pick at it to expose a giant hole through which Anderson could land hard techniques. Throwing 1 - 2, Anderson knew that Okami would defend himself with his hands. Notice however, in the top right frame, how Anderson's palm is turned out, catching the inside of Okami's wrist. Anderson pulls Okami's lead hand out of position in the bottom left frame, and lands the kick to the head in the final still. This is a brilliant set up to learn because it is one that anyone can use.

That is not to say that it is not used by some brilliant natural high kickers as an easier way to land their best technique, however. Here is Mirko Cro Cop finishing a poor, overmatched Japanese fighter inside of 20 seconds by taking advantage of the latter's desire to parry Mirko's left straight. Mirko pulls on Nagata's wrist and Mirko's left shin sails through to his opponent's undefended head. To learn more about high kicking, check out my article on it.

To strikers like myself, this is the best thing about Anderson's kicking game, it relies on intelligence rather than super human athleticism. Indeed, if you know the science of boxing and correct head movement, almost ALL of Anderson's game is based on scientific anticipation and exploitation, rather than his athletic prowess.

We have only touched on two techniques in Anderson's performance against Okami, but between his feints, his sidestepping to change stance, his Thai clinch work and the step off right hook he used to finish the fight, there is a lot more to talk about in this fight alone. I'll be examining many more aspects of Anderson's game and fights in the coming weeks ahead of his rematch with Chael Sonnen, so bookmark Bloody Elbow and be on the lookout for my pieces.

Note: We will be concluding the Fedor Trilogy with his clinch work, takedowns and miscellaneous grappling on Friday - so keep an eye out!

The striking techniques of Anderson Silva along with 19 other world class strikers are broken down through demonstrative photography and instruction in Jack Slack's ebook Advanced Striking: Tactics of Boxing, Kickboxing and MMA Masters.

Jack Slack's blogs at Fights Gone By which is full of useful and free striking techniques and concepts. Find Jack Slack on Twitter @JackSlackMMA.