With UFC 147 and UFC 148 looming in the near future, we are about to see some of the best middeweights in MMA history fight once more in the twilight of their careers. Anderson Silva is near universally recognized by fight fans as one of the best athletes MMA has to offer and Rich Franklin may be the forgotten man in terms of how well he did and for how long he did so. Both men have given us some of the best moments in fight history.

In my previous two Judo Chops of Anderson Silva, we looked at his counter jab and high kick against Yushin Okami in Part 1, and in Part 2, his counter right hook against Forrest Griffin. In this edition, we will examine his performances against Rich Franklin, then thought to be the best middleweight in the world. This Judo Chop will cover specifically his use of the Muay Thai plum position - or both hands behind the head, on the base of the skull.

One of the interesting things about the entire Anderson Silva phenomenon has been the amount that fans forget based on hype. Anderson Silva has NOT always been a great fighter, in fact during his PRIDE run he was a pretty mediocre fighter, pulling out a couple of decent wins and a couple of losses to poor opposition. It is the fact that so much of Anderson's skill has been acquired through intelligence and hard work, rather than being god-given, that makes him such an incredible figure.

Silva's striking, like the rest of his game, has improved continuously throughout his career. Nowadays, Anderson is known as possibly the best boxer in MMA. Ridiculous assertions about a match with Roy Jones Jr. aside (which Silva would not come out of well even against the Jones of today), it is hard to argue against Silva's boxing skill in an MMA context. He was not always so smooth with his hands, however.

In fact against Franklin, Silva's head movement was absent (aside from his dance toward the end of the first round of their second meeting) and Franklin landed most of the best punches outside of clinching range. Anderson came out in almost a pure Muay Thai mindset; his hands high and reaching to parry Franklin's blows. Certainly, it was Silva's plan to stand firm and get into the clinch, but for much of the time spent standing in their bouts, Franklin was actually doing slightly better than Silva from a pure kickboxing perspective.

It should be noted that while Rich Franklin's stand up is not brilliant from the perspective of body mechanics, and he often seems wooden, he is very much an intelligent striker. Combining this with a good all around game, and great conditioning is what made Franklin shine in a very unexciting division. For instance, against Evan Tanner, both men crossed their feet when circling, either man could have been knocked to the floor with a strong low kick or even a well timed foot sweep or punch, this is a first few days of kickboxing error. Franklin does, however, make up for this by doing more interesting things, such as throwing an overhand style lead hook which catches many opponents off guard, dipping when he jabs, and hooking off of the jab - a move that only boxing old timers perform regularly today. All are fairly high level strategic maneuvers.

After the jump we will look in detail at just how Anderson used the Thai Plum to overwhelm the crafty Rich Franklin.

Anderson Silva's Thai Plum (or double collar tie) is known as one of the most dangerous positions in MMA. Though it began as an effective continuation of offense, as Wanderlei Silva had pioneered it in PRIDE, Silva's Thai Plum has also found a place in his defensive arsenal, substituting for the wrestling pedigree which he does not own. This was particularly clear against Yushin Okami, and has since been taken up by several other fighters who use the Thai clinch as a counter to the wrestling clinch - such as B.J. Penn and more recently, Michael Bisping against Chael Sonnen.

In Anderson Silva's first bout with Rich Franklin, Silva came in with the very clear intention of getting the Plum on Franklin with little concern for striking. Notice below in the first two frames (top left and top right), Franklin attacks with his dipping jab, and Silva parries, raising his other forearm in anticipation to block. Silva's modus operandi is normally to move away from strikes, not to stand and take combinations on his forearms - it is clear that had Franklin continued his combination, Silva would have assumed the Thai clinch on him by blocking inside of Franklin's hooks and snaking his hands around the base of Franklin's skull.

In the middle two stills, you will observe that Silva is circling away from Franklin and instinctively tries to grab the clinch as Franklin swings at him. He is, however, moving backward and Rich's head simply slips free. 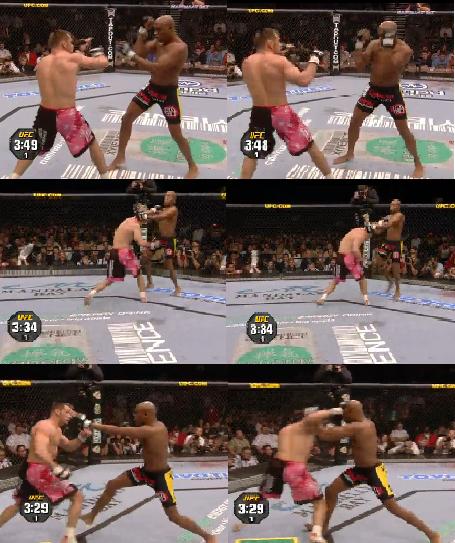 In the final stills you can see Anderson enter behind his rear hand, which was covering Franklin's lead hand, preventing Franklin from jabbing Silva as Silva stepped in (I talk about this a great deal). Franklin is forced to drop his hand to escape Anderson's lead hand's influence, then attempt a looping hook. As Franklin drops his right hand, Silva threads his left hand through for a half plum. Though Anderson's shoulder is protecting his chin, Franklin aims for Silva's temple, unlike most average strikers. In the match, Silva broke his clinch off and stiff armed Franklin, hit him with a hook, then dived right back in to the clinch. I also talk a great deal about hand fighting at striking range in my ebook, Advanced Striking: Tactics of Boxing, Kickboxing and MMA Masters.

In his first bout against Franklin, Silva took the champion by surprise with his move into the clinch, and was able to step inside and grab the full plum rather easily. In their second match, however, a great deal more strategy was needed to force the Thai plum on an opponent who was now fully aware of its power. Firstly, Rich Franklin's team had noticed that Silva was extending his hands when he parried shots, hoping to skip his hands from defending Rich's punches to grasping Rich's neck in one movement. To this end, Franklin began throwing the jab and lead hook in rapid succession. 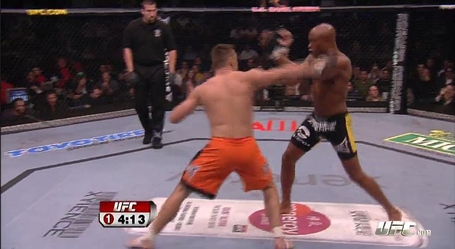 Notice, Rich has just faked a jab and Anderson reached to parry it, which is very bad striking form unless you are setting something up of it. Anderson was setting up the clinch, but Franklin knew this. Notice how the hook has a clear path to Anderson's jaw. It did not connect hard - Franklin does not put his weight into his punches very well unless he is really loading up as he did against Nate Quarry, and this one fell a little short - but Franklin managed to fluster Silva on a couple of occasions with these rapid jab - hook combinations.

When Anderson Silva did acquire a hand behind the neck on Rich Franklin, Franklin hand fought for his life. Anderson too, had upped the level of his clinch game however. Anderson routinely found himself with a single collar tie (hand behind Franklin's head), but fighting to get full, two handed control of Franklin's posture. To this end, he would assume wrist control, force Franklin's wrist to his waist line and attempt to pummel into a full Thai plum from there. Anderson didn't rely entirely on speed though, he used an excellent technique at the end of the first round to get from a single handed control to a full plum from which he almost finished Franklin.

Look below. Anderson is locked up with Franklin, holding behind Franklin's neck with his left hand and controlling Franklin's wrist with his right hand at hip level (top left still). Anderson steps his right foot behind Franklin (top right still), before hooking his lower leg around Franklin's calf and forcing his weight towards the fence (middle left still). Franklin is not expected to fall for such a basic trip, but as Franklin hops back off balance, his arms flail to control his weight, and Anderson is free to snake his other hand behind Franklin's head (middle right and bottom left stills). The trip has also forced Franklin's posture to break, and he is now easy to pull forward by the head. From here, Anderson connects a near fight ending knee to Franklin's sternum (bottom right still). Franklin was carried to his corner by his team, and never truly recovered from this particular clinch assault, allowing Silva to simply walk him down and assume the clinch with ease in the second round. 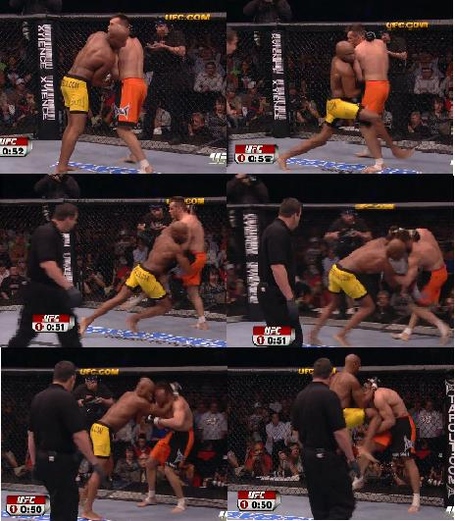 Anderson Silva's clinch work is a thing of beauty. Especially as a striking exponent, I admire his ability to look at the clinch from a striking perspective, and use it to damage and deter opponent's who consider it from a wrestling perspective. In future years, we will see a great many more fighters utilizing the Thai plum as a form of takedown defense as Anderson did against Okami. There are numerous subtleties to Anderson's clinch game, and I have barely touched on them here - for instance, his stiff arming of opponent's to land more strikes as he messes with their posture, as Fedor Emelianenko and the great Jack Johnson both did.

Where Wanderlei Silva brought the Thai plum to popularity in MMA, and Shogun Rua carried the torch, Anderson Silva has added a further technical element to what the former two fighters used as a brute strength technique. Silva's numerous methods of entering the Thai plum and unbalancing the opponent have taken his clinch work several levels above his mentor's.

The techniques of Anderson Silva, Fedor Emelianenko, Jack Johnson and 17 others are examined in Jack Slack's ebook, Advanced Striking. Pick it up now!