Mixed Martial Arts sees the arrival of more amateur wrestlers with each passing year. Some of these wrestlers have little experience past high school and some competed on the Olympic stage. For some of these fighters, their success fighting in a cage vastly outstrips their success as an amateur wrestler while some fighters never capture the incredible levels of success they experienced as elite wrestlers.

I would like to argue that the opposite is true. To do this I have analyzed the statistical relationship between wrestling pedigree and MMA success.

Keep reading after the jump to discover how numbers may show that better wrestlers make better fighters.

I've made charts and graphs that should finally make it clear. I've prepared a lecture on why I have to leave elite wrestling accomplishments have a statistical relationship to accomplishments in MMA.

I'm a teacher by trade and one of the subjects I teach is wrestling. Thanks to Bloody Elbow, I have a medium by which I can also teach about wrestling. This alone does not satisfy me. It is not enough that I teach the subject matter and allow the readers to draw their own conclusions; I desire to persuade, to convince my audience that my way of thinking about the matter at hand is the right way .Here I indulge myself in the single greatest vice in the teaching profession, that of foisting my own viewpoints and opinions upon my pupils. The particular opinion being foisted: that elite wrestling accomplishments do relate very strongly to MMA success i.e. the better amateur wrestler, the better the fighter.

A common, and poisonous, notion among young people is that all opinions are equal. As a youth I often experienced the extreme annoyance of an over-matched peer attempting to neuter my carefully weighed and considered position on an issue with the foul bromide, "Well that is just your opinion." I have no clue from where this idea of opinion egalitarianism arose, but it is the refuge of the intellectually weak and needs to be disposed of. As a teacher I feel it is my sacred duty to inform my students in no uncertain terms that not all opinions are created equal. Some opinions are better than others, particularly those opinions supported by facts. Elite among even the exceptional class of fact based opinions are the greatest and most unassailable of all opinions, those supported by numbers. One of the greatest lessons a teacher can impart to a young student is that you can't argue with the scoreboard.

This is why I intend to not just foist my viewpoint about wrestling credentials in MMA, but to support it with statistics. With numbers on my side anyone who is paying attention will have little choice then to concede to my position. Statistics provide me the opportunity not just to force a way of thinking on those I am trying to teach, but to force the very best opinion. Below I have compiled statistics on current UFC fighters and their level of wrestling accomplishment and have provided analysis supporting my assertion that the greater the level of amateur wrestling accomplishment, the greater the likelihood of mixed martial arts excellence.

It bears mention that this entry has nothing to do with how wrestling credentials affect effective MMA wrestling. I have much to say about high level amateur wrestling and how it translates to MMA wrestling, but that is not the topic of issue. This is an analysis of wrestling pedigree and how it corresponds to MMA success, it does not attempt to answer the questions as to why and how the relationship exists.

There are three standards of MMA accomplishment I could choose to use as a metric for MMA success. I first thought to use wins and losses as a measurement but quickly realized that this was going to skew results by the very nature of the UFC. Few fighters with a losing record in the promotion enjoy the luxury of staying in the promotion. Next I looked to current or past title holders. I only counted twenty-eight of these and I figured this as too small a sample and prone to create misleading results. Finally I settled on awarded title fights. This is a tangible UFC accomplishment, reflective of success in competition, and the group of title shot recipients is substantive at fifty-five members.

For the sake of simplicity I included only the UFC for this analysis. I realized that the choice to include some promotions other than the UFC but not others would only be made arbitrarily so it was really a choice between the best promotion or all promotions. The choice for the former was easy.

In my first step in gathering data for this analysis I have divided UFC fighters into eight statistical categories based on wrestling accomplishments[i]. I have created these categories based on my own wrestling knowledge and judgement as to appropriate intervals of success in amateur wrestling. With each successive category the field of fighters will be continuously whittled down.

For this category I included and fighter with legitimate wrestling participation indicated documented in their past. What I deem as legitimate is sort of like obscenity, I know it when I see it. There is a fairly high likelihood I have accidentally omitted some fighters from this statistical tier. In the interest of transparency and potential correction by readers I have listed the fighters on the UFC roster who are in this group but not in narrower classifications. I will do the same for each additional category. This class includes seventy seven fighters including:

This group includes any fighter possessed of experience in college wrestling including those programs outside of NCAA division one, there are some problems with this classification which are discussed in the next section of this entry as well as the end notes. This class includes sixty four fighters.

This includes any fighter who was on an NCAA division one team. This category bothers me as it includes several fighters who were only division one wrestlers in the flimsiest sense possible (sort of like me). In the end, however, this concern will help prove an interesting point. This class contains thirty six fighters. This includes 36 fighters.

This category really separates the wheat from the chaff in terms of division one accomplishment. This is for fighters who during their wrestling career qualified for the (typically) thirty two man a weight national wrestling championship. There is no pretending at this point, division one qualifiers are all extremely good wrestlers. twenty six fighters are in this category.

Statistical Group 6: NCAA Division 1 Round of 12 (Received second loss one match away from All American Status)

The blood round. That is the nickname for the consolation quarter finals of the NCAA tournament. One more win and a wrestler achieves All American status. Arriving at this point is a major accomplishment in itself as it indicates that a wrestler has won at least two matches in the toughest tournament in all the land. This category holds twenty fighters.

A top eight finish at the NCAA tournament earns the classification as a collegiate wrestling All American. This is the elite of the elite. The UFC claims thirteen division one All-Americans

First place at the NCAA tournament. There are four in the UFC.

Next I have listed every fighter on the current roster who have participated in a fight for a UFC championship. There are fifty five in all. [viii] 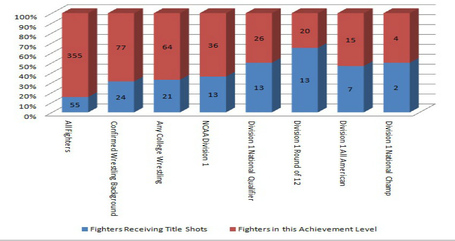 A few things on this chart stand out. First is that the percentage jumps a huge interval when wrestling backgrounds are in introduced. The second is that there is little change from from category two to four, then a huge jump in category five. This tells me that simply participating on the division level does not distinguish a fighter from wrestlers of advanced accomplishment in high school and lesser collegiate classification; one must standout on the division one level to predictably stand out in MMA. I find the drop in category seven to be suprising and I think the sample is too small in category eight to draw any conclusions. What stands out most, however is categoy six, the round of twelve.

Sixty-five percent of the twenty UFC fighters who have reached the round of twelve in the NCAA tournament and beyond have been awarded fights for UFC titles. This is impressive upon first glance and warrants additional investigation. I decided to measure this statistical category against all the fighters in the UFC and all the fighters who have fought for titles and this is what I came up with: 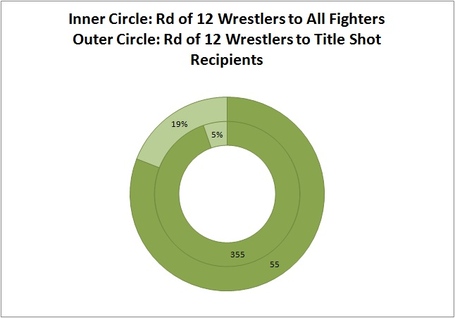 The inner ring of this graph shows that these round of twelve fighters make up five percent of all the UFC roster members considered for this entry, but comprise almost four times as high a percentage of all fighters who have received title shots. This category of fighter is represented in title fights far out of proportion with its population

I am under no illusions that this is analysis is thorough and comprehensive. I have not done very little and I know that this analysis can be improved and has its problems.

It is my opinion that the strength of the relationship in the All-American category will increase significantly in the next few years. The MMA world outside the UFC is littered with extremely promising former division one All-American fighters including three recent Olmypians and an Olympic alternate. Within the UFC itself are several All-Americans with potential title shots in the relatively near future.

Even if this were not the case I think the findings here paint a compelling picture and in the very least it is reasonable to conclude that there is a statistical relationship between amateur wrestling success and MMA success up to at least a certain level of wrestling. Larger samples, more time and data, and more advanced analysis techniques would no doubt create more definitive results, but this is a step in the right direction. Until further data reveals itself the numbers seem to favor the notion that the better wrestler makes the better fighter.

[i] I considered adding a ninth group for wrestlers who fit my criteria for world class status, but since there are only three in the UFC I did not bother.

[iii] I included Kamal in this category, he did not wrestle in college, I probably should not have put him here.

[iv] Which is my name, minus four letters

[v] Ramsey wrestled for Utah Valley State University which has achieved full division 1 status but had not yet finished this process while he was on the team.

[vi] Though Ferguson and Levesseur technically started their collegiate careers at division 1 schools, they spent the vast majority of their careers elsewhere so I have not included them in the D-1 group

[vii] I'll be honest, I'm not entirely sure that Varner even wrestled for Lock Haven

[viii] I excluded Nogueira because he only fought for the interim title. I included Zuffa era WEC champs at 145 and 135. I included fighters who have recently fought in designated title eliminators.