Anderson Silva is one of the top two fighters in the world pound for pound in terms of accomplishment, ranked by most either #1 or #2 depending on whether he or Georges St. Pierre has fought more recently. He is also well known as one of the finest strikers in the sport. This is in part due to his ability to utilize a full Muay Thai and boxing arsenal without simply being taken down and submitted, as many truly elite strikers who enter the sport are, and also due to some of his more memorable and creative knockouts. Last time we spoke about Anderson's counter jab against fellow southpaw Yushin Okami (click to read). This time we will talk about one facet of Anderson's most memorable performance in the eyes of many fans; his lopsided destruction of former UFC Light Heavyweight Champion, Forrest Griffin.

To set the scene, Anderson Silva had just gone 5 rounds with Jiu Jitsu ace Thales Leites. Leites refused to meet the champion in the centre of the cage, and Anderson refused to attack Leites on the ground. What followed was a game of cat and mouse where neither man stepped up to play the role of the cat. The match was cringeworthy and dented the image of Anderson Silva as an unstoppable knockout artist. To bounce back from this woeful main event, Anderson needed to win convincingly over a world class opponent. To this end, the UFC matched him against Forrest Griffin.

Griffin, a light heavyweight who lacked speed and power in his own weightclass, was known almost entirely for his heavy low kicks and decent Jiu Jitsu, which he had used to wrest the light heavyweight title from Quinton Jackson a year earlier. Despite his relatively small number of recorded victories by TKO, Forrest was always keen to trade punches on the feet. He was tenacious, always moving forward, and lacked the power, speed or ground game to trouble Anderson. He was therefore, the perfect opponent. Griffin had, however, only been TKOd three times previous to his meeting with Anderson, and had taken Quinton Jackson's best shots. In spite of this toughness, Silva's dismantling of the American was masterful.

Silva's entire gameplan focused around Forrest's bad habit of dropping his left hand following a punch - never bringing it back high as a slower fighter should to protect his chin and temple. This provided the hole for Anderson to work with his stronger, right hand. After the jump we shall examine Anderson's:

There is a point to establish straight off of the bat, and it's a basic principle of striking; your left hand protects you from your opponent's right, and your right against his left. If one of the hands is too low, the opponent's corresponding hand will strike over it with ease. If one of the hands is too wide or too tight to the centre line, the opponent's corresponding hand will strike past it. Most fighters are competent at keeping their hands in position when they're moving, but once they begin punching, many fail to recover their guard completely. This is the mistake that Forrest Griffin has made often throughout his career, and one that Silva and his camp were well aware of.

At the beginning of the bout, Forrest opened with a few probing jabs and a half hearted 1 - 2 - high kick. Throughout this, Forrest was pulling his jab back far too low. When the lead hand is not punching it should always be in position to either parry or block the opponent's right straight. When fighting a southpaw (particularly a right handed one like Anderson Silva), the right hook is an additional concern that makes pulling the jab back correctly even more important. Notice how even when pawing with his jab, Forrest returns it very low and holds his chin high (top left and right stills). Silva is drawing back to a similar hand low position, but he is fully aware of it and only does so because he is 1) at a distance or 2) because he wants to draw a counter. 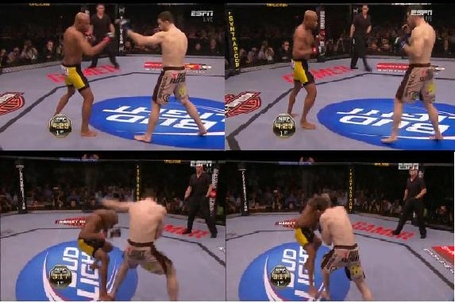 Forrest's complacent lead hand means that when Anderson actually steps into range while Forrest is jabbing, ducking under the punch (bottom left still) Anderson can easily fire back the right hook over the top (bottom right stil). This early attempt about 1:40 into the first round only glances Forrest, but it served as an indicator for the performance to come.

Despite Forrest's promise to charge right at Anderson (something that the UFC brass clearly wanted when putting this match together) he was understandably cautious and measured in the opening minutes. Where Anderson would normally sit back and do the bare minimum to win on points against an inactive opponent (as he did against Patrick Cote, Thales Leites and later Demian Maia), he showed unusual anxiety to get the match going against Forrest Grifffin. Pushing forward with a flurry of blows, Silva ended in an orthodox stance with a jab that fell short (top left still). From here Griffin fired back his jab, which Anderson leaned away from (top right still) and Griffin began to circle out to his left. 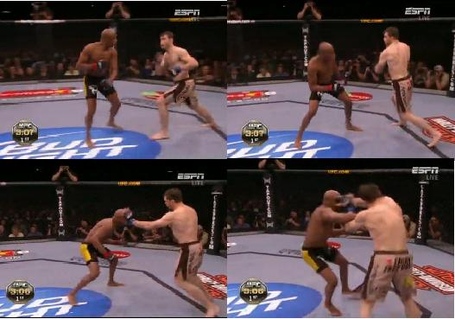 Griffin circled at a suitable distance from Anderson to avoid Anderson's right hand, but Anderson stepped towards him with his right foot into a southpaw stance, weaving his head low as he did so to avoid Forrest's pawing (bottom left still). This is an unusual technique, as many fighters aren't comfortable or capable of switching stances to any great degree of success - something which I discussed in my Ultimate Southpaw Guide: Switch Hitting. This change of stance also allowed Anderson to get closer to Forest as the latter circled out. Forrest, panicked by Silva's pressure began pawing and pushing with his left hand (bottom left still) and Anderson leapt forward with a right hook over the top (bottom right still).

Utilizing this sort of pressuring movement is important for counter punchers, to bait the sort of flustered attack that they can counter.This entire sequence is one that can be readily adapted to any striker's training - pressuring the opponent backward and switching stances to catch them with a hook as they circle out - and I have laid it out (along with over 70 others) in clear instruction in my ebook, Advanced Striking: Tactics of Boxing, Kickboxing and MMA Masters.

After Griffin returned to his feet, he was clearly worried about his lead hand. The top left still shows Forest with his hand to his temple, he assumed this posture several times, tapping his head as many boxers do when they have been hit, attempting to remind themselves to keep their hand up. But immediately he went back to attacking Anderson, this time with running punches, and Anderson countered with his right hand over the top of Griffin's left yet again (top right still). 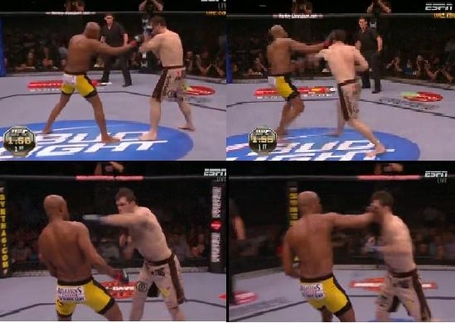 While Griffin was clearly in desperation mode, he was still not keen to attack Anderson. Anderson, for his part, wasn't keen to attack Forrest, and so, just as with Okami, his hands came down. By dropping his hands Anderson could bait the attack that he wanted (not being a fighter that uses his hands much to block anyway) and bring his hands in from the blind angle, below Forest's vision. The fight ending punch was yet another right hand over Forest's low returning left, as Forest ran at Anderson with punches and Anderson pulled his head back and countered over Forest's left straight retraction with his own right.

Against an opponent who was clearly supposed to make Anderson look good and rebuild the Silva brand, Anderson Silva still exceeded all expectations. No-one had ever manhandled Forest Griffin so easily, completely and technically. Indeed the final knockdown didn't knock Griffin out cold, he simply fell to the floor, then weakly raised his arms when Anderson moved in to strike him. Griffin was left emotionally and mentally broken by Anderson's tight counter game and wanted no more after he was caught with the final punch. Through all of this - an elite level countering gameplan, executed to perfection - Anderson Silva still made it appear to all as though he were making it up in the heat of the moment.

The techniques of Anderson Silva and over 70 other techniques used by 20 world class strikers can be learned in Jack Slack's ebook Advanced Striking: Tactics of Boxing, Kickboxing and MMA Masters.

Jack Slack blogs at www.FightsGoneBy.com and can be found on twitter @JackSlackMMA.