Ken Shamrock "The World's Most Dangerous Man" was once considered the best fighter in the world. After an impressive run in Pancarase, Shamrock returned to the UFC seeking revenge for his loss to Royce Gracie.

Rorion Gracie's idea of using the Ultimate Fighting Championship to raise awareness for the martial art of Brazilian Jiu Jitsu was wildly successful as Royce Gracie won three of the first four UFC tournaments. Brazilian Jiu Jitsu schools began to spring up and thrive all over California and other parts of the United States but for as much attention as the art received there were many fans who just enjoyed the fights.

No Holds Barred fighting was becoming a sport unto itself, complete with combat athletes training for the events and fans anticipating the event. The pay-per-view buy rates for UFC events steady climbed and disagreements began to breakout between the Gracie family, the promotor Art Davie, and the TV executives of the PPV companies. Rorion wanted minimal rules, no time limits and for contests to as closely resemble an empty handed street fight as possible, while those on the TV side of things wanted to make it more viewer friendly.

The debate around adding time limits was particularly tense. The original UFC had featured a time limit, but Rorion was able to have it removed from future events. However, when Royce Gracie's match with Dan Severn ran over the alloted PPV time and thousands of UFC fans were enraged when they missed Royce's dramatic triangle victory, Rorion was forced to accept time limits.

Rorion was unhappy with the current direction the UFC was taking but the Gracies were convinced to take part in on last UFC for a special match.

UFC 5 was set to take place on April 7th, 1995 in Independence Arena in Charlotte, North Carolina and would be unlike any UFC event before it. While UFC 5 would feature a tournament, promoters had decided that format was too unreliable to provide the matches fans wanted to see. UFC 3 was supposed to be the big rematch between Ken Shamrock and Royce Gracie but both fighters had been forced to withdraw due to injury, so promoters took chance out of the equation and scheduled the first UFC Superfight.

Ken Shamrock was the reigning King of Pancrase, a Japanese Professional Wrestling promotion that specialized in live fights, known as "shoots". Before Shamrock returned to the UFC he faced rising star Bas Rutten in his first title defense in 1994 and had a classic match that Shamrock won via submission. So in March of 1995 Shamrock again faced Rutten a won a very quick kneebar victory.

With his crown defended Shamrock returned to the United States to seek his much sought after revenge for his loss to Gracie. Shamrock had spent years planning his revenge and training to defeat the Brazilian's guard, and he came to UFC 5 extremely well prepared. The match was given a 30 minute limit with five minutes of overtime if the match was able to continue, effectively making it a 35 minute match. Shamrock planned to stay inside Royce's guard and attack to body to sap the Brazilian's strength. Once Royce was sufficiently drained, Shamrock would finish him. Royce came to the cage with the same basic strategy he had used in the pervious four UFC events, drag the fight to the ground in any fashion he could and then allow his grappling prowess to carry the day. Shamrock took Royce down right away and the two battled in the guard. Shamrock was able to strike to the body but Royce was able to defend to the point where the 30 minutes passed without much action.

Referee "Big" John McCarthy stood the fighters up to start the final five minute overtime. When Royce threw a push kick Shamrock landed a right hand that opened a cut under Royce's left eye. Shamrock then took Royce down and spent the rest of the fight attacking that cut.

Time expired and since there were no judges, the fight was declared a draw. Most fans and media considered it a victory for Shamrock however, as he was the first man to meet Gracie's vaunted guard head on and not just survive but control a fight. After the fight both fighters embraced and showed great respect for the other's toughness.

In the aftermath of UFC 5, Rorion Gracie relinquished his role with the UFC, citing the addition of time limits and now a discussion of adding judges that were destine to turn this from true fighting into a game. Rorion felt the UFC had served its purpose for spreading the awareness of Brazilian Jiu Jitsu and had no interest in creating a new sport. Rorion sold his interest in the UFC to Semaphore Entertainment Group (SEG), the UFC's television partner. Royce left with his older brother, leaving Ken Shamrock atop the UFC. 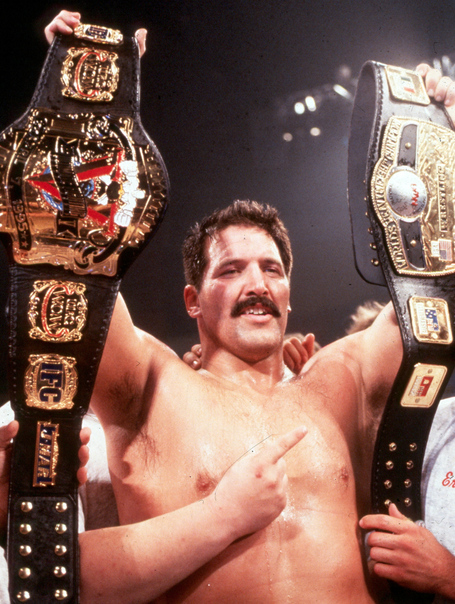 The challenger to Shamrock's perch atop the UFC after UFC 5 was clear. Dan Severn, the runner up at UFC 4, had returned to the Octagon and ran roughshod over the competition.

While many credit Mark Coleman with the advent of the ground-and-pound strategy in the UFC, it was Severn at UFC 5 who laid the foundation for wrestlers in MMA.

At UFC 4 Severn took his opponents down, sometimes with some serious force, but was content to just grapple with them. This time around Severn used hands, elbows and knees to batter opponents into submission once on the ground. At one point when facing Russian Oleg Taktarov, Severn opened a fight ending cut with a knee from side control.

Before Shamrock could face Severn, Pancrase required him to return to Japan to defend his title again, this time in a rematch against Pancrase founder Minoru Suzuki. This second match with Suzuki highlights one of the difficulties in dealing with Pancrase, it never truly separated from its pro wrestling roots. While many of the fights were true "shoots" some of the matches did have predetermined outcomes, known as a "work".

The creators of Pancrase did not see themselves as pioneering a new sport but rather finding a different way to sell pro wrestling in Japan, and sometimes business calculations took precedence over the competitive nature of their athletes.

What we do not know is how many works took place in Pancrase. The majority of matches were shoots and most of the works are pretty obvious, like Shamrock's win over Matt Hume which featured Shamrock suplexing Hume and then backflipping directly into mount. Shamrock's 1995 title match Minoru Suzuki is another known work of Pancrase. The reasoning being that Pancrase wanted a Japanese born athlete to defeat Shamrock and hold the title so that Japanese fans would become more invested in the championship. So Shamrock lost via kneebar after allowing Suzuki to dramatically escape a fully extended armbar. While Shamrock would fight in Pancrase again, he would never again be allowed a title shot as his focused turned more firmly to his home country.

The tournament portion of this card started with a bang as Tank Abbott, a pro wrestler and street brawler, made his MMA debut with a vicious knockout of Hawaiian martial arts expert John Matua. An interesting historical side-note, since Rorion Gracie wasn't there to insist on no gloves being worn Abbott wore fingerless gloves, becoming the first fighter in the UFC to wear that style of glove, which is required now by the modern rules. Patrick Smith, a veteran of UFC 1 & 2, also took part but had to withdraw when he suffered an injury in his first round victory.

Abbott won his first two matches with quick TKOs but in the finals he was drawn into a prolonged match by Oleg Taktarov, the Russian defeated by Severn at UFC 6.

An experienced Judoka and Sambo fighter, Oleg won all his pervious matches by submission and was able to use his grappling to hold off Abbott. As the fight wore on the elevation caused both fighters to slow, but Oleg was able to take Abbott's back and apply a rear naked choke to become the first European UFC tournament Champion. 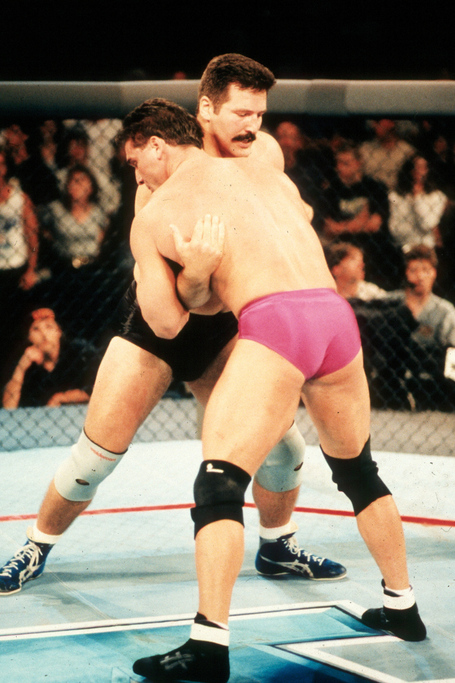 In contrast to the protracted tournament final the superfight seemed to be over in a flash. Shamrock and Severn were both wrestlers by nature and engaged in some standing clinch work. But when Severn tried for a double leg against the fence, Shamrock was able to lock on a guillotine choke and force Severn to tap out.

Ken Shamrock was finally UFC champion, and while his reign would be just under a year in that time he would fight in the UFC three more times. His fight with Oleg Taktrov would end in a draw that would have long lasting ramifications for MMA in the United States at UFC 7.

At UFC 8, Shamrock won his second UFC superfight when he submitted Kimo Leopoldo with a kneebar. At UFC 9, Shamrock would lose his title to Dan Severn in the first real clunker of a UFC title fight. Dubbed "the Detroit Dance" Shamrock and Severn spent much of the match not engaging one another.

Shamrock took part in one additional match against Brian Johnston at the 1996 UFC Ultimate Ultimate fight card before Shamrock left the UFC for the World Wrestling Federation. While Shamrock would return to MMA in 2000, at the time of his first retirement from MMA he was one of the most accomplished fighters in the world.