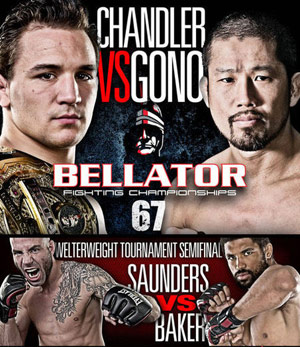 Join us for LIVE play-by-play from Bellator 67 occuring at the Casino Rama in Rama, Ontario. The event will air live on MTV2, EPIX and the Armed Forces Network with the prelims airing on Spike.com

The headliner features Bellator Lightweight champion Michael Chandler in a non-title fight with UFC and Pride veteran Akihiro Gono.
The co-main event of the night is a Welterweight season six tournament semi-final between Bloody Elbow's own Ben Saunders and Bryan Baker.

The main card is rounded out with non-tournament bouts between Heavyweights Damian Grabowski and Dave Huckaba and Welterweights Ryan Ford vs. Luis Santos.

Join us at 8 p.m. ET when I'll be live blogging the main card fights. Full fight card is after the jump.

Ladies and gents, we are live. First up is a welterweight bout pitting Luis "Sapo" Santos versus Ryan Ford.

R1: Sapo breaks the ice with a left high kick that Ford blocks. Ford faking the shot, then they collide with mutual knees and Sapo goes down, but he's right back to his feet. Sapo unreels another blocked high kick that's hard enough to cause echoes, then connects on yet another that floors Ford. Ford recovers to some extent and initiates a clinch. Sapo is peppering with punches and Ford stumbles into the turtle position with Sapo on his back, content to punch and elbow rather than hunt for subs.

Brutal elbows from Sapo, some of which are borderline 12-6. Ford crawls to the fence with Sapo along for the ride and slowly presses his back to the cage to defend as the round expires. That could be a 10-8 but falls just short of my accepted level of dominance, especially since Sapo was complacent on his back. 10-9 Sapo.

R2: Ford whiffs with a high kick and seems to have regained his faculties. Nice leaping knee to the body from Ford, who uses it close range and clinch. Sapo circles off the fence and they tangle in the over-under. Ford snatches far-side wrist control and peels Sapo's arm away from his body and crushes him with a knee to the head that folds Sapo over. The referee intervenes when Sapo doesn't defend the follow-up strikes.

Ryan Ford defeats Luis Santos by TKO in the 2nd Round.

R1: Grabowski throws the cheap shot on the glove touch to start classy. Grabowski gets the takedown and Huckaba postures for a kimura, but Grabowski strikes his way free. Grabowski is a little tentative and referee Big Dan Miragliotta stands them up. Grabowski flails on a takedown and takes a couple scoots forward on his butt, but Huckaba is having none of it. Huckaba stuffs another but Grabowski keeps the pressure on and clinches him against the fence and throws knees.

Grabowski shifts gears and hits an outside trip into Huckaba's closed guard, but is once again inactive enough to warrant another restart from Big Dan. Huckaba looking for his left hook, throws a flying knee on the bell. 10-9 Grabowski.

R2: Grabowski can't find a home for a series of lefts. He charges with another set and plows Huckaba into the cage for another clinch exchange. Another short leaping knee from Huckaba that Grabowski avoids. Snuggly-soft low kick by Grabowski, which is more effective than anything Huckaba's doing. Uppercut and left hook from Grabowski doesn't land but sets up his takedown effectively. Huckaba, who is bleeding from a cut, goes to one knee on the fence with Grabowski punching from behind.

Huckaba reverses position but opts to stand rather than dive into Grabowski's guard. Huckaba finally finds the mark with a stiff punch toward the end of the round. 10-9 Grabowski for more effective striking and grappling.

R3: Grabowski switches to traditional stance to start the 3rd, then goes back to southpaw and nails a takedown. Huckaba closes his guard, controls Grabowski's head and tries to land short punches. Grabowski postures up with a flurry but Huckaba pulls him back down and holds on for a referee stand up. Grabowski fails on an immediate takedown and again tries to engage via butt-scoot to the crowd's displeasure. Grabowski falls short on a single leg and eats a stiff right.

Huckaba lands another nice left hook but then disengages. Another left hook and a sprawl by Huckaba. Grabowski is gassed and seriously losing stem. Commentator Jimmy Smith rightfully criticizes Huckaba for his painful hesitation despite Grabowski's decline and being down 2 rounds. 10-10 for neither fighter showing an advantage. (30-28 Grabowski overall.)

All 3 judges see it 29-28 for Damian Grabowski, who defeats Dave Huckaba by unanimous decision.

R1: Saunders starts out orthodox. Baker attacks with punches to initiate the clinch but can't get the high crotch because of Saunders' underhooks. Saunders gets ballsy and goes for a flying triangle, then transitions beautifully into an omoplata. A set of stiff punches from Baker breaks the hold and they scramble back to the feet; Saunders drops back for a guillotine. Baker defends but quickly finds himself in a tight triangle. Saunders putting on a BJJ clinic and now switching to an armbar.

Baker hangs tough and escapes and starts pounding with Saunders close to the fence. Saunders boots him away with both feet and gets to his feet but goes wide to defend another double-leg attempt. Saunders goes to a knee and reaches over for a kimura and Baker wisely slips around to his back. Baker pulls him back and gets both hooks in as the bell sounds. 10-9 Saunders for the more effective grappling.

R2: Baker opens with a hard low kick. Baker sits down on a a few hard combinations and Saunders laughs it off though they were legit. Saunders drags Baker down from the body lock, Baker is back to his feet and clinching on the fence. Saunders goes for a guillotine and then thwacks Baker with a few knees from the Thai plum when he pops his head out.

Another tall knee to the chin from Saunders from the single collar tie. Baker clinches up to stifle Saunders and hits another takedown. Big hammerfist by Baker. Jimmy Smith claims all strikes from the top are better, which is just false. Baker spiders his way from full guard all the way to side control; Saunders pivots around to put his feet on the fence but isn't close enough to power out. Nice sequence of hammerfists from Baker that steal the round as it ends. 10-9 Baker.

R3: Both men are busy with kicks and punches. Baker bull-rushes into the clinch again and eats a knee for his efforts. Saunders on the fence with the whizzer while Baker throws short knees to the thigh. Baker drops levels for a slow double leg that Saunders defends through wrist control. Baker sneaks in a clever ankle pick to put Saunders down again. Saunders angles for an armbar or triangle, Baker stacks him to slip out. Baker now grinding Saunders into the fence to prevent submission attempts. Saunders angles his hips to attack and Baker uses it to pass, almost takes the back but Saunders is back up.

He's quickly back down however, showing huge power with a massive throw. Saunders says something to the ref, Baker lands strikes, breaks free and slams a spinning back to the prostrate Saunders, then fakes another and tries to sneak around to side control instead. 10-9 Baker clearly. (29-28 Baker on my card.)

One judge sees it 29-28 and the other two have it 30-27 for Bryan Baker, who defeats Ben Saunders by unanimous decision.

R1: Gono comes out relaxed while Chandler presses with level-drop feints and a busy jab. Perhaps Gono is a tad too relaxed, as Chander vaults forward with a 3-piece combo, then stays on the trigger with a left hook and a straight right that drop Gono. Chandler goes berserk with follow-up punches for a devastating 1st-round stoppage.