As the 2012 Mundials kick off tomorrow in Long Beach, California, we at Bloody Elbow bring you a look at some of the biggest teams and best competitors in Brazilian Jiu Jitsu.

Over the last few years, the Alliance Jiu Jitsu team has dominated the vast majority of Brazilian jiu jitsu competitions. The legions of elite competitors that march from its academies scattered throughout North and South America and the cohesive teamwork they retain and refine in an era of BJJ politics gives Alliance Jiu Jitsu a nearly peerless reputation for creating and improving submission grappling champions.

The 2012 Mundials will see 278 athletes compete while training at an academy directly related to Alliance. Another 200 or so will come from a school run by a teacher who received their prized black belt from an Alliance instructor. These are staggering numbers for a non-prize money tournament, even when the prestige of the Mundials is factored in. The number of competitors sent by Alliance into the Mundials, Pan Ams, ADCCs and more is somewhat related to why the team keeps winning competitions, but the success of their black belts again and again on the highest levels is downright freaky to behold.

As the famous JSho points out in his terrific breakdowns, this is the 17th modern Mundials and of 160 possible black belt medals, Alliance and its offshoots have won 44. Gracie Barra and its offshoots have won 52 and the Gracie Humaita tree has 22. How is this possible for a team that is actually smaller than Gracie Barra and boasts no school even close to the size of Renzo Gracie's mega-academy in New York City?

To find out, we have to look at the teachers and the extremely strong network of teammates.

After the jump, Alliance's beginnings, famous competitors and comments on their 2012 Mundials team.

The Alliance Jiu Jitsu team is essentially led by three men - Romero "Jacare" Cavalcanti, Fabio Gurgel and Alexandre Paiva. All have their own clutches of famous black belts, dozens and dozens of students, work with several satellite academies and they share students and techniques nearly seamlessly with each other. 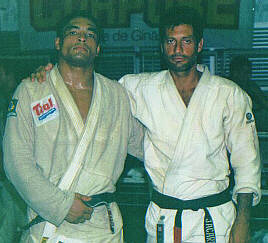 Rickson Gracie and Cavalcanti via reocities.com

Romero "Jacare" Cavalcanti trained with and received his black belt from the legendary Rolls Gracie, who died in a hang-gliding accident in 1982 at the age of 31. Rolls had a reputation for having truly special grappling abilities and was known for cross-training in nearly every grappling sport possible to bring the best of them into his own skill package. The list of famous competitors who were either direct students of his or students of his students is too long to list, but the names include the likes of Rickson Gracie, Royler Gracie, Mauricio Motta Gomes (the father of Roger Gracie), Marcio Stambowsky and Jacare Cavalcanti.

The introduction of Jacare to BJJ took place sometime in the 1950s or 1960s and Jacare's website says that he officially started training at the age of 11 in 1963. At this time, Jacare trained with Jaildo Gomes, who was related to the Vale Tudo scene, but at age 16, he ended up training for a brief time at Carlson Gracie's school - which was going to produce the very best competition team ever assembled by a single school. A move to the United States in his early twenties to seek higher education put the BJJ on hold for a while, but Jacare would move back to Copacabana, Brazil and to Rolls' school in 1974. Jacare would get his degree in Physical Education from the Gama Filho University in 1978.

Eight years later, he was the last black belt awarded by Rolls Gracie. When he was young, there was no real Mundials to compete in, so he contented himself with several Brazilian championships and Rio de Janeiro championships. At the time of the unexected death of Rolls, Jacare was working at the Copacabana Gracie School and decided to go with Rickson at the Humaita school for a short period of time. Soon after, Jacare had his own school and was turning out his own phenomenally gifted and hard working BJJ competitors.

One of those competitors, Fabio Gurgel, would win the Mundials four times in 1996, 1997, 2000 and 2001 (and two CBJJ Mundials as well in 1994 and 1995). Gurgel was also the first of Jacare's black belts in 1989 - Jacare now has nearly 50, if not more - and would amicably open his own school in Sao Paulo. The Vale Tudo scene was booming and Gurgel took part in it by defeating the Luta Livre fighter Denilson Maia and fought in UFC 11, losing a decision to Jerry Bohlander, the Lion's Den fighter. It may be worth noting that I strongly suspect Gurgel would win the same bout if it was contested by modern UFC rules and judging. 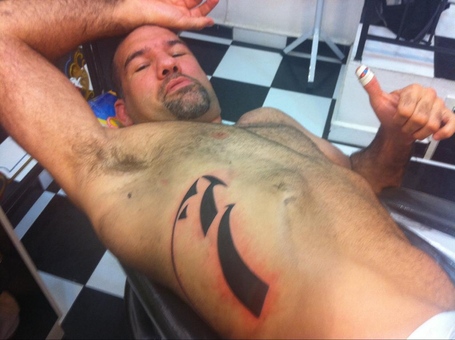 Fabio getting the Alliance eagle tattooed on his side.

In 1983, Alexandre Paiva began training at the Humaita school with Jacare and moved with him to the new school when it was established. A gifted competitor from the beginning, Paiva was regularly training at Jacare's school and cross-training with others like Rickson elsewhere. In 1988, a spinal injury sidelined him for two years and he eventually had surgery to fix the problems. The year 1991 saw Paiva get his black bet from Jacare and in 1992, he opened Academia Strike, a school of his own, with Roberto Traven, one of the greatest BJJ competitors ever and another Cavalcanti student, and Francisco Caneppa. 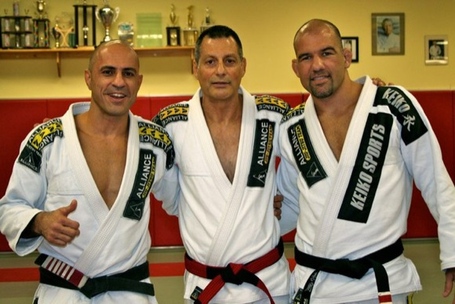 Paiva, Cavalcanti and Gurgel via www.graciemag.com

In 1993, Gurgel, Paiva and Cavalcanti decided to combine their schools for competition purposes, as the other big teams like Gracie Barra and Carlson Gracie were doing so. Thus Alliance was born and from the start, world champions at every level were being produced each year. Cavalcanti moved to the United States in 1995 and would settle in Atlanta, Georgia after some years in Florida. The Alliance group won the Team Mundials title in 1998 and 1999 - before the "Big Split" happened.

T.P. Grant has already covered the revolt of several world-renowned black belts and the fragmentation of Alliance into several teams - four of which now boast multiple time world champions - here on Bloody Elbow. It would be a disservice to rehash what he has already written. The names of Leo Vieira, Rodrigo Comprido, Eduardo Telles and Fernando Terere would be prominent among the departing grapplers. Andre Galvao, current ADCC Absolute champion and world champion, was a purple belt at the time the schism happened.

The ones that stayed ended up being just as good. 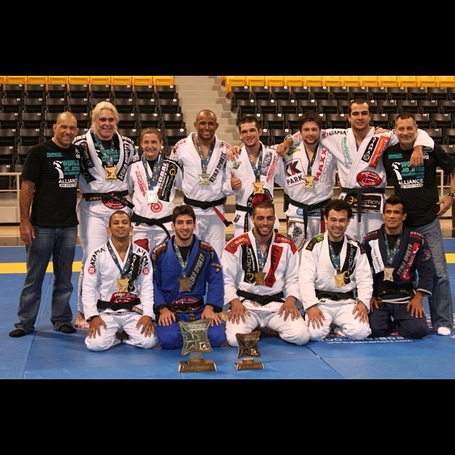 Name all the people here and win an imaginary prize.

Marcelo Garcia bounced around for a while in his early development, but stabilized his jiu jitsu career with an assistant coaching job under Fabio Gurgel at Alliance Brazil headquarters in Sao Paulo. He would receive his black belt from Gurgel and then start his streak of competition wins that has him firmly in the discussion as the Greatest of All TIme.

Rubens "Cobrinha" Charles, a two time world champion black belt under Terere, began working with Fabio Gurgel in 2006, after the dissolution of Terere's TT team (TT for the partnership with Telles) and moved to Atlanta in 2007. Cobrinha is now a four time world champion in the featherweight division and is known for his extremely unorthodox guard and high finishing rate. Unfortunately, Rafael Mendes seems to have his number lately and he has taken second in several high profile competitions over the last three years.

Gabrielle Garcia will go down in history as the greatest female submission grappler of all time. There is nobody else on the landscape of history that has a roster of accomplishments can compete with her five world titles, multiple ADCC championships and complete, utter domination of every opponent before her.

Names like Michael Langhi, once the lightweight king of the BJJ world, Lucas Lepri, another lightweight wonderkind, Leo Nogueira, a heavyweight talent, Antonio Peinado, another heavyweight prospect, Luanna Alzuguhir, another top five woman grappler ever, Sergio Moraes, world champion and TUF: Brazil contestant and Bruno Malfacine, a late addition to the Alliance team and four time world champion himself are all constants in the Alliance team. Many of them train together, travel together and move constantly between the schools of Gurgel, Paiva, Cavalcanti, Marcelo and Cobrinha to congregate and launch further assaults at team titles and individual glory.

The reconstituted Alliance network won the Team title in 2008, 2009, 2010 and 2011. A fifth straight title could be in the works this year. During the "dark period" from 2002 to 2008, individual medalists at almost every major submission grappling championship, in and outside of the gi, featured at least one Alliance competitor. Their run of brilliance has been sustained and astounding for many years. 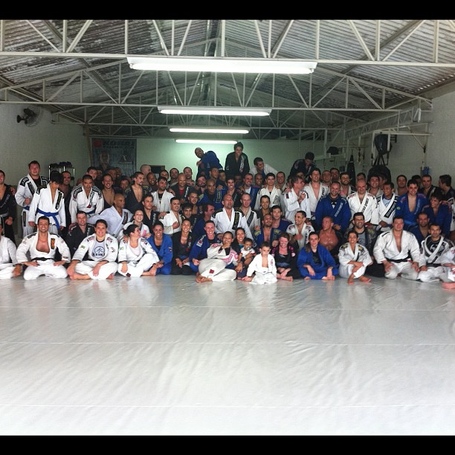 This year's team is enormous and the black belt contingent is as intimidating a line-up as any in the world. However, the black belts are a little thin in the middle in terms of established competitors who are serious medal threats in each of the fifteen divisions.

At roosterweight, Malfacine is a near mortal lock for the finals. At featherweight, Cobrinha is similarly destined to make it to the finals against his nemesis, Rafael Mendes of Atos BJJ. At light featherweight, Gui Mendes will probably win again. At lightweight, Lucas Lepri is a 2007 world champion, but he has not had the luck and the outright skill to blast through his competitors lately. The Middle division is probably a foregone conclusion between Kron Gracie, Vitor Henrique, Lucas Leite and Claudio Calasans.

Ian McPherson may have turned in my single favorite match of the 2011 Mundials against Eduardo Telles, but he is in a Medium Heavy division with beasts like Andre Galvao, Nivaldo Oliveira and Rafael Lovato Jr. The Alliance Heavy competitor, Tarsis Humphreys, is still not fully over his knee injury and would do well to make it to the quarter-finals of the division ruled by Rodolfo Vieira. In the Super Heavy and Ultra Heavy, the Alliance team will probably have at least one competitor in the semi-finals. The women's side will almost surely have Gabi and Luana winning their divisions.

And Marcelo Garcia is out with a broken collarbone sustained while learning how to snowboard.

The usual Alliance competitors Michael and Michel Langhi are not listed. Moraes is not in this year's Mundials, as he will fight MMA on the TUF Brazil card soon. Ryan Hall and his 50/Fifty team seem to have mostly skipped this year's edition of the Mundials for whatever reasons.

Alliance is likely to win another team title due to sheer numbers, but their level best medal threats are getting older and the younger athletes have not stepped quite up to the extremely high standards their predecessors have set at this time. The brown and purple belts should yield some exciting new stars of Alliance to watch for and the grappling world should thank Jacare, Fabio and Alexandre for the excellent coaching they have provided us with for the last twenty odd years.

The 2012 Mundials will be taking place from May 31st - June 3rd and live streams are available on Budovideos.com for just $20. With their new multi-mat set up, Budovideos will have every single match of the event viewable online. Here at Bloody Elbow we will continue to do previews, live results and event recaps, so stay tuned.