Back in early April, our own Anton Tabuena was in attendance at ONE FC 3: War of the Lions. At that event, we saw Masakazu Imanari make his promotional debut against Kevin Belingon, the popular and young Filipino URCC champion. Imanari may not have the best record at 25-10-2, but he is one of the most feared grapplers within mixed martial arts for his ability to break knees and ankles in seconds with freaky leglocks.

Belingon went in confident that he could maintain enough base and force this into a stand-up battle - which Imanari loves to engage in, despite mostly losing them. However, early on in the first round, Imanari had Belingon defending a very deep heel hook by hopping around like a madman hellbent upon escaping a manacle. The defenses did not work or were too late and Imanari got the tap at 1:18 of the first round.

Join us after the jump for some GIFs and analysis by our stellar Judo Chopper and grappler, Patrick Tenney.

For further reference, it may be worth going through our compendium of leglock Judo Chops from the past few years: Herman Heel Hooks Noke From the 50/50 Guard | Palhares Heel Hooks Drwal and Branch | How Palhares Sets Up His Leglocks | Oliveira's Calf Slicer On Wisely | Shogun And The Fight-Saving Leglock Against Henderson | Shogun Rua's Half Guard Game and How Jones Shut It Down | Patricio Pitbull's Heelhook Finish of Romero

Patrick Tenney: I am 100% convinced that Imanari throws the kick and overcommits or intentionally makes it look like he slips just to get Belingon to rush into the ground fight. Belingon makes an enormous mistake during the rush in when he allows his right leg to come in between those of Imanari. This pretty much activated the trap card... Imanari crosses his left leg under the thigh of Belingon's right leg and over the hip/knee, which twists the knee out and drops Belingon. While Belingon is dropping, the leg placement of Imanari simultaneously opening up the heel - which Imanari deftly secures by weaving his arm under and catching the heel. Belingon tries to turn and run out - but after only 30 seconds or so. Doing that against a leg lock specialist of Imanari's caliber? Good luck with that.

To defend, Belingon tries to maintain his base in the position and rotate his knee into a more natural angle. Imanari uses his right leg to pressure Belingon downwards, while also blocking his escape route (of turning to the outside and slipping straight away). You can see Belingon try to break Imanari's hand grips with his own hand, but that's just not a feasible defense in this situation.

Ben Thapa: If I may interject, what Patrick means by "pressure" here is Imanari using his right leg on the left shoulder of Belingon to off-balance him and guide him downwards.

Patrick Tenney: Belingon has been brought fully to the ground now by Imanari and continues trying to put his leg at a better angle. At this point, Imanari transitions over to his own side and eventually goes fully inverted to keep control of the heel and start torquing the knee. Belingon needs desperately to keep Imanari directly in front of him when he tries to stand, but Imanari rolls through and re-traps the heel on the outside again. When Belingon tries to stand back up, yet again Imanari is shutting down the escape.

Imanari finally secures the heel while also being able to control Belingon's hips with his knee reap. You can see Imanari turning the heel over with his elbow catch and rotating the heel/ankle in the opposite direction of the knee - which forces Belingon to finally tap or risk horrible damage to his knee ligaments (a la Imanari vs Jorge Gurgel back in 2003).

This is a graphic lesson that fighters need to learn when competing against Imanari: you cannot be impatient, you have to attack him from the outside and unless you're 110% sure that he is almost knocked out, you cannot engage him when he's on the ground (whether it looks like he slipped or not).

The lessons that can be learned from fighting Imanari can be applied readily to other fighters - especially the likes of Rousimar Palhares - and in competitive no gi Brazilian jiu jitsu or submission grappling, leglocks are the most preferred avenue of attack for most competitors. They can do serious damage and are easier to latch onto than arms or necks. 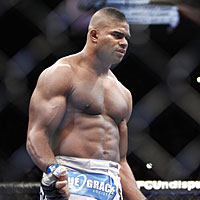