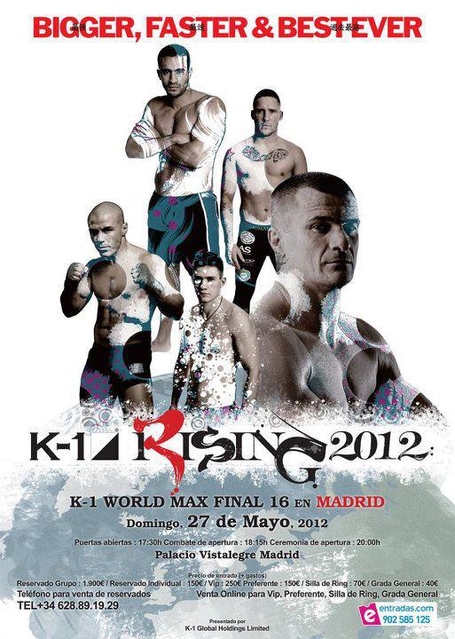 Promoted to the Front Page by Anton Tabuena

K-1 returns with its first major event since 2010, as the K-1 World MAX 2012 Final 16 is set to occur on May 27th in Madrid, Spain. The event centers on the first round of action in this year's super welterweight (70 kg. / approximately 154 lbs.) tournament, and also includes a number of non-tournament fights to be contested at the heavyweight limit and in other divisions.

The following post focuses solely on the super welterweight tournament, and highlights aspects of the bracket which those interested in the event should be aware of going in. Save the last one, all points highlighted are of direct significance to the fights that will occur and/or to understanding this event's importance despite its watered down field of competitors.

With the list of bouts out of the way, let's move on to the (first) five things you should know about the K-1 World MAX 2012 Final 16.

When they first met in the K-1 MAX 2010 tournament's round of sixteen, Zambidis and el Hadj engaged in a high-paced, back and forth affair that many kickboxing observers consider a classic. Their bout went to an extension round (which seemed to be grounded more in an understanding of potential entertainment value than actual merit), and both were put on the canvas in the course of the bout.

As these two fighters prepare to meet in the round of sixteen once again, their established identities provide the sense that another memorable battle may be in store. Mike Zambidis has posted a 3-2 record in his last five fights (just as he had prior to the 2010 tournament) and there are questions regarding how long the heavy-handed Greek fighter can remain on the biggest stage in kickboxing. As for Chahid Oulad el Hadj, he is the same banger that Zambidis planted overhand rights on nearly two years ago. The 23-year-old has been outclassed by many top kickboxers in the world today, but remains committed to an all-action style that is fan friendly if not the most likely to help build a sustainable career.

What's more, Mike Zambidis always has interesting bouts in the K-1 MAX round of sixteen. In 2005, he obliterated Norifumi 'Kid' Yamamoto with a right hand that is well worth the look. The next year, Zambidis battled with lanky Japanese standout Yoshihiro Sato. 2007 saw him defeat Gago Drago by decision following an extension round. Zambidis was on the wrong side of a knockout in the extension round when he met Andy Souwer in the round of sixteen in 2008.

2. Andy Souwer will appear in his seventh K-1 MAX tournament

Veteran kickboxer Andy Souwer has already appeared in a half dozen K-1 MAX tournaments, winning in 2005 and 2007 while finishing second in 2006 and 2009. The sport's embrace of the tournament format has done Souwer no favors in the past couple years, however. The Dutch fighter spent 2010 focusing on a return to form in the Japanese Shootboxing promotion, but was ultimately outdone by Toby Imada in the semifinal round of the promotion's S-Cup tournament. In 2011, Souwer looked to top the It's Showtime Fast and Furious 70 kg. tournament in the absence of Giorgio Petrosyan. Unfortunately for Souwer, Ukraine's Artur Kyshenko bested him in their semifinal bout.

Back in the K-1 fold, Souwer has the opportunity to capture his third K-1 MAX title in a somewhat watered down bracket. He has a solid first round opponent in Abraham Roqueni, who defeated Souwer by a controversial decision February 2011. Assuming Souwer advances, he will be likely to have fighters like Mike Zambidis and the aforementioned Artur Kyshenko standing between him and tournament glory. Souwer may not be a lock for the final round in this tournament, but he is an iconic figure in super welterweight kickboxing and fans must watch the beginning of his tournament campaign here.

3. Artur Kyshenko may well be the favorite

Since the end of 2010, Artur Kyshenko has looked unstoppable more often than not in an eight fight streak that has seen him lose only to Giorgio Petrosyan and Robin van Roosmalen. Kyshenko has entered the K-1 MAX tournament on four previous occasions, reaching the final and semifinal round once each.

The 25-year-old Ukrainian has puzzled fans with his mixture of incredible skill and deep-seated ability to fall short at the most inopportune times. That said, Kyshenko has shown the best form of anyone in the field as of late. He also has a historical advantage over every other tournament competitor that he has faced: 2-1 against Andy Souwer, 2-0 against Gago Drago, and a win a piece over Mike Zambidis, Yasuhiro Kido, and first round opponent Su Hwan Lee.

4. Nine competitors are in their first K-1 World MAX tournament

Of this grouping, the fighters most likely to find success would seem to be Murthel Groenhart and Chris Ngimbi. Groenhart trains at Mike's Gym in the Netherlands, has competed at higher weight classes, and has established himself as a strong contender under the It's Showtime banner. Ngimbi, despite his inability to win the It's Showtime Fast and Furious tournament last year, remains that promotion's super welterweight champion.

Abraham Roqueni and Yuji Nashiro are other interesting first-time competitors. Expectations surrounding Roqueni have been tempered a bit following back-to-back wins over Andy Souwer and Gago Drago, as he has dropped three recent bouts. Nashiro enters the tournament having unexpectedly won last year's K-1 MAX Japan tournament. Japanese competitors may not have much of a shot in this tournament field, but Nashiro may fare better than countryman Yasuhiro Kido.

Andy Ristie could well advance past the first round, as he has been matched up with the recently lackluster Gago Drago. Meanwhile, Xu Yan could advance with a first round victory over Yasuhiro Kido. Yan is perhaps not great, but a better fighter than a quick glance as his recent bouts would indicate.

Harut Grigorian, Reece McAllister, and Longern Superpro Samui have all been given somewhat unfavorable first round match ups.

Unless the stars align, Gago Drago will not find much success in this tournament. That said, the Armenian-Dutch fighter has endeared himself to fans and has a bit of a cult following in the kickboxing world. He has fought most everybody there is to fight at super welterweight. He has notched some really awesome wins. He hasn't won a fight since 2010. None of that matters here, though. It's all about his entrance. Just watch this. Or this. Or this. Note the seamless transition from a Rich Boy-styled "dat ass" face to swagged out European trance dance. Are you not entertained?