MMA Origins: The Gracie Era in the UFC

The creation of the Ultimate Fighting Championship in November of 1993 marked the true start to American interest in mixed martial arts, known as No Holds Barred fighting at the time. It had been created by Rorion Gracie with the goal of spreading awareness of Brazilian Jiu Jitsu to the American public and Royce Gracie had been selected to represent the Gracies because of his unassuming nature and appearance.

Share All sharing options for: MMA Origins: The Gracie Era in the UFC

The night went more perfectly that Rorion could have imagined. The tournament went off with out a hitch; Royce defeated everyone he faced impressively, almost flawlessly, and no major injuries occurred to force fighters out of the tournament. All involved were shocked when the buy rate came in much higher than expected at 86,000 buys. Promoter Art Davie was thrilled, his own personal promotion company WOW Promotions had been founded to promote the UFC, and now Davie saw a chance to cash in on the success of the first UFC.

Rorion was extremely pleased also, thousands of Americans had witnessed Royce defeat three larger, more intimidating fighters seemingly effortlessly using Brazilian Jiu Jitsu. Planning began almost immediately for another UFC event, and success had made Davie and those on the TV side of things more open to Rorion's rule requests.

The UFC events that would follow would be as close to true street fights as Rorion could make them. The five minute rounds were removed, unlimited time limits were imposed. Also groin shots would be made legal, the only remaining rules would be prohibitions on biting and eye gouging. The one night tournament format would continue, as Rorion believed it would highlight the damage strikers do to their own hands as well as to their opponents.

While this format would result in exciting events, but ultimately it would become very clear that would not be realistic way to grow the sport.

UFC 2 was held on March 11, 1994 in Denver. This time around the field was expanded to sixteen fighters, with a non-televised preliminary round. The only fight from that round that appeared on the broadcast was Royce Gracie facing off with tough, Japanese born karateka Minoki Ichihara.

UFC 2 was another smashing success as it recorded another impressive buy rate. Royce Gracie made another championship run: defeating first Ichinhara, then Kung Fu practitioner Jason DeLucia, and then Dutch Judoka Remco Paedoel to punch his ticket to the finals. There he faced UFC 1 veteran Patrick Smith. Royce was able to force Smith submit to strikes to claim his second UFC championship. 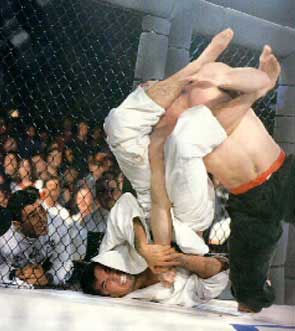 (Royce Gracie applying an armbar to Jason DeLucia at UFC 2)

These early victories are how Royce is classically remembered: quickly overmatching martial artists, who look like adult versions of the Cobra Kai competition team, with his submission grappling. While this was the case for the first two UFCs, things would get significantly more difficult for Royce moving forward. His style was now a known commodity, fighters everywhere were training in ground systems and concocting their own personal strategies on how to defeat him. And it was in these fights that it becomes clear that Royce is more than just a product of his family's system, showing himself to a great fighter with his determination to win and the hear to over come adversity.

Eight fighters would travel to Charlotte, North Carolina to take part in the third installment of the Ultimate Fighting Championship. Ken Shamrock returned to the Octagon, and was very different fighter from the man who had appeared in UFC 1. He had spent time in Brazil training with Brazilian Jiu Jitsu black belts to expand on his grappling and his possible rematch with Royce was the selling point of this event.

And Shamrock's skills were on fully display against two time Olympic Jukoka Christophe Leininger. Shamrock used a very positionally aware approach, securing strong top position from inside the guard and pounding his way to a TKO victory instead of diving back for a leg lock.

Royce's first match of the evening came against a hulking street fighter and preacher from Hawaii, Kimo Leopoldo. With no actual martial arts experience beyond street fighting, the promoters decided to credit Kimo with a Taekwondo black belt to make him sound more legitimate. Kimo and Royce had a grueling fight with a punishing pace.

Kimo was relentless in attacking, stopping several take-downs attempts and at one point even taking Royce's back.

Kimo was the first fighter to be able to damage the Brazilian, landing hard blows to Royce both standing and on the ground. After about four minutes of intensive action both fighters were exhausted and Royce was able to lock on an arm bar. Kimo was so tired he was only able to tap with his finger tips, and Royce had to be held up by his brother to stand for the official decision.

Keith Hackney was forced to withdrawal due to an injury suffered in his quarterfinal victory, so Ken Shamrock was faced with alternate Felix Lee Mitchell. While Shamrock won it was not an easy fight for him. Mitchell used the fence very well to prevent take-downs and made Shamrock work very hard to the take-down that eventually settle the affair. During the fight Shamrock was injured in his match and withdraw from the bracket as well.

According to the broadcast team Royce had been battling several nagging injuries coming into the tournament and after the Kimo fight he was in no condition to continue. With no alternates left to replace him, Royce reported to the Octagon to face Harold Howard, Royce's corner threw in the towel before the opening bell ever rang. The reaction was enormous: the crowd was in shock that the two time champion had bowed out, Howard was thrilled to be in the finals, and Kimo and his manager Joe Son, stormed the Octagon to celebrate Royce's injury as their victory.

To met Howard in the finals the promoters sent in Steve Jennum, a ninjustsu fighter, to replace Shamrock. The much fresher Jennum was able to record a TKO stoppage and become the first and only ninja to win a UFC title. This event had been devastated by injuries and it was the first sign that the current UFC format was not in the best long term interests of the sport.

That said UFC 3 was another very successful show and very quickly preparations were under way for UFC 4: The Revenge of Warriors. The event would be held in Tusla, Oklahoma and was intended to be a chance for Royce Gracie, Steve Jennum and Ken Shamrock all be in the same tournament. However, Shamrock was already committed to a tournament in Japan and was unable to attend. Storm clouds were gathering for the newly birthed American Mixed Martial Arts scene however.

U.S. Senator John McCain had taken upon himself to to put a stop to No Holds Barred fighting in the United States and he set his sights on UFC 4. He first tried to find a Oklahoma state law he could use to get officials in Tusla to shut the event down, but was unsuccessful. Senator McCain then attempted to get pay-per-view providers to drop the event, but there had been so many buys before the event already that PPV companies refused. While unsuccessful, the Senator's attempts to shut down the UFC was the first indicator that forces were gathering against this new sport.

Despite Senator McCain's best efforts, UFC 4 did take place and it proved to be Royce Gracie's last appearance in a UFC tournament. To replace Ken Shamrock, the promoters reached out to 36-year-old Dan Severn, an internationally decorated wrestler who also had submission grappling experience. 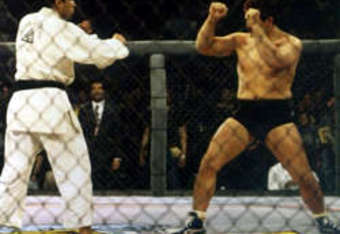 Severn, on the other hand, won a brutal and quick submission victory in his first fight. In his second match Severn would face an injury replacement for UFC 3 champion Steve Jennum, who was forced to withdraw after a hard fought victory over professional boxer Melton Bowen. Severn made short work of the replacement and was in the finals.

Royce on the other had was faced with UFC 2 veteran and White Tiger Kenpo Karate black belt Keith Hackney, who defeated Joe Son via submission in the first round. In this fight Royce took a good deal of abuse, Hackney showing good awareness of how to stop take-downs and hit Royce with some very hard shots. Royce weathered the storm and was able to lock on an arm bar to win the match. Severn vs Gracie was set for the final.

This would prove to be a disaster for the UFC. Not because the fight was a bad one, it is one of Royce's signature victories. Severn took Royce down and applied brutal pressure to the Brazilian for fourteen minutes before Royce was able to lock on a triangle to win. The problem was that the fight ran four minutes over the PPV broadcast time, so all over the United States the fight was suddenly cut short and fans had to wait for the VHS release to see Royce's dramatic, and final, UFC victory.

The aftermath of UFC 4 would have lasting impacts on the UFC, the young American MMA scene and the Gracie family. The injuries that had devastated UFC 3, the problems imposed by matches with no time limits and the gathering forces arrayed against the UFC would all create a crisis that would force changes to rule set and cause the Gracies to leave the UFC.