Share All sharing options for: How Do Rear Naked Chokes Work? University of Calgary Study Explains

Using a choke hold is one of the best ways to win a fight. Mixed martial artists, grapplers and regular civilians have proved this over and over. In particular, we regularly see a submission hold called the the rear naked choke being used to win official bouts between amateurs and professionals and potentially dangerous unofficial fights between civilians.

The rear naked choke is applied from behind the opponent with one arm being wrapped around the neck and the other arm cinching the hold tight to create pressure upon the neck and threaten unconsciousness. The manner in which a rear naked choke is applied can come off as rather brutal to onlookers. Most times, the person in the choke hold is visibly struggling to get free and grimacing like the Hamburglar stole their lunch. 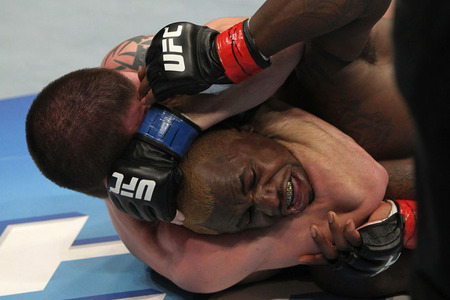 Due in part to the visual imagery, this particular choke has been the target of several small-scale studies over the years that attempt to explain exactly how the choke operates in rendering people unconscious. A University of Calgary study recently came out in November of 2011 that has some intriguing research in what allows a rear naked choke to put someone to sleep. The article has been out for some time and nearly got lost in the deluge of biomedical publications that come out every so often. However, it was brought to the collective gestalt of MMA and grappling followers by Rener and Ryron Gracie, who found a Force Science article commenting on the actual study (unfortunately available to most as an abstract only).

Fortunately, I have some friends at my grappling gym with medical research skills and got ahold of the full study. As a result, we at Bloody Elbow get some spiffy science explaining how the rear naked choke (called a Vascular Neck Restraint) worked on 20 men and 4 women. Even if they are Canadian, it should be interesting and widely applicable to all humans.

Hit the jump for the science talk.

Before we begin, the study is called "Mechanism of loss of consciousness during vascular neck restraint" and was co-authored by Jamie R. Mitchell, Dan E. Roach, John V. Tyberg, Israel Belenkie and Robert S Sheldon. The study comes out of the Departments of Cardiac Sciences, Medicine and Physiology and Pharmacology at the University of Calgary in Alberta, Canada. The Journal of Applied Physiology published it on November 17, 2011.

The people to be choked out (chokees) were outfitted with a fluid-filled balloon system to measure neck pressure on both sides of the neck and with heart monitors clipped to a finger, airflow-measuring tubes under the nose and their height, weight, age and gender were recorded. The mean weight of the men was 202 lbs and the mean height was 5'11". For the women, the mean weight was 165 lbs and the mean height was 5'7". The researchers told everybody not to drink any caffeinated beverages after midnight of the day before.

The chokees were seated to keep them still and in roughly the same positions as each other. Captain Warin applied the choke hold in basically the same way each time, using the same arm and physical positioning to deliver approximately the same pressures upon the chokees.

Warin applied the choke in a way that cut off the carotids and left alone the windpipe. He is right handed, so the right arm was used in all chokes to encircle the neck. The researchers measured a stop in the flow of air during the choke, but it was due to the chokees holding their breath. Nobody complained of windpipe damage after the study was done and nine chokees mentioned slight tracheal compression, while one complained noted slight residual neck pain after the choke was released.

Sixteen people stopped tracking that object being waved around and were deemed unconscious. The mean time of being choked out was 9.5 seconds, although one person went out at 1.6 seconds.

Four people tapped out. The mean time was 11 seconds, although one person stopped just before the instructor was going to let go at 22 seconds. One person tapped out at 0.7 seconds. The temptation to call this person a wussy should be leavened with the knowledge that these chokees are not trained grapplers and the choke was being applied with considerable force.

The remaining four out of the twenty-four chokees did not tap out or go to sleep after roughly 23 seconds of the choke being applied. The carotid artery measurements showed that 70% of their right arterial blood supply to the brain was stopped and 40% of their left arterial blood supply was stopped. For the other twenty, the figure was roughly 80% in both arteries. The researchers could not explain why the four did not tap and speculate that anatomical differences might be an underlying cause.

The researchers found no measurable Valsalva effects (people passing out because they couldn't breathe) and no measurable baroreceptor action (the body recognizing that blood is cut off and telling the heart to slow down).

The coolest part of this study is quoted below:

Ocular fixation with VNR was commonly associated with brief periods of myoclonic jerking and, in some subjects, the eyes turned upwards. Many subjects reported a narrowing of the visual field with color changes or having entered into a dreamlike state. Importantly, recovery occurred almost immediately on release with no observed or reported negative side effects.

In almost a throwaway moment, the study notes that those with a larger neck went to sleep faster. They speculate that the greater amount of body tissue in the neck allows for better compression of the arteries, but that is probably a whole new study in its own right.

The researchers conclude by saying something along the lines of "Within the confines of this study, this choke hold is a pretty safe way for police to put people to sleep or get them subdued. Be careful when applying to unhealthy or older people, although you probably should not do that to them at all". That common sense approach to this good science is good news for those who want to show the safety and practical nature of martial arts choke holds to the naysayers out there who get worried over a grimace.