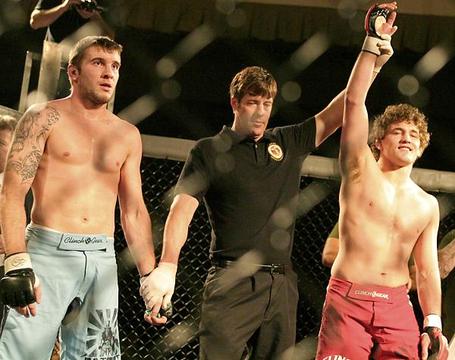 Promoted from the fan posts by Kid Nate.

It would be nice to have an imaginary world where we could reliably predict a wrestlers success in MMA by watching to see how they blast through double leg takedowns again and again. However, we live in the real world and that simple reduction of the difficult crossover process of a very complex set of skills does not work.

The problem is that at the moment, we have many different wrestlers-turned-MMA-fighters that exhibit many different styles and experience varying degrees of MMA success. Outward signs of "physicalness" or aggression as a wrestler are not enough. Whether clearly demonstrated or not, a wrestler achieves elite levels collegiately or internationally possesses more than adequate "physicalness" to succeed in any martial art and it is their processes and set-ups that lead to success that is more important. As a result, watching a wrestler use a double leg again and again successfully in a wrestling match does not mean that he would be a good fit for MMA .

This is relevant to American folkstyle and freestyle wrestling and perhaps to the future of MMA talent evaluation.

What style of wrestler will translate in the best MMA fighter? This question untrimmed and unqualified is impossible to answer. Few wrestlers can be reduced to a style or type, and most elite wrestlers have risen to their place in the sport through a level of refinement that leaves them completely anomalous.

What I want to do is begin a live discussion of, if not an answer to, a more manageable question. What sort of wrestling attack style will yield the best offensive wrestling results in MMA?

The avid or even casual MMA viewer will probably say, "Why of course it is the blast/straight-on, freight train double leg take down, I see wrestlers accomplishing this technique with great frequency in MMA." In fact, many within the wrestling community will say the same thing. While I do not think they are completely wrong, I think they are looking at the wrong aspect of the technique. Any elite wrestler can consistently finish a double leg once in on a fighter in a fighting stance.

Our concern should not be with what a wrestler does when he or she are already inside on a shot, but how they got there in the first place. My theory is that when predicting the success of a wrestler's offensive leg attacks in MMA, we should be looking not at how many legs are being attacked on a shot and not on whether they are high, medium or low level attacks. I believe the variable far more relevant to MMA success is the set up.

In this clip J.P. O'Connor hits a nice double on Cyler Sanderson. J.P. is working a Russian control tie (pulling the arm against the sternum with one hand grabbing the wrist and the other over-hooking the tricep), as Sanderson is posting on J.P.'s head. J.P. sets up the double leg by pushing the Russian up into the post. It helps that he reaches his lead foot as far as he can between Sanderson's legs before attempting the technique.

Jordan Burroughs is wrestling Aliyev of Azerbaijan in the semi-finals of the 2011 World Championships. As the match is winding on, Aliyev appears to be weary of Jordan's pace and starts to post his left arm on Jordan's shoulder. This is most inadvisable - as Burroughs is hard-wired to immediately chop down on this post. Chopping down on the arm on that side clears the way to Aliyev's legs and Jordan snatched his other arm down hard to get in on the double leg. Nobody on earth can stop him when he is in on both legs.

This clip from the 1999 world finals shows a freshly out of college Stephen Neal squaring off against Shumilin of Russia. The 265 pound Neal uses feints and motion to get Shumilin to raise his hands ever so slightly, then in a breathtaking display of speed, grace and power, Neal blasts in on a magnificently-timed double. We get a glimpse of the kind of athleticism that served Neal well in a long career with the New England Patriots.

Just now we have seen three of the exact same leg attack set up in three radically different ways. These are all NCAA champion wrestlers and it is not necessarily true that each would be comfortable setting up a double if one were to interchange wrestlers and set-ups. Every wrestler has different levels of skill and comfort with different types of set-ups. The three set-ups above are representatives of what could be called the three families of leg-attack set-ups. I will disclaim here and state that just because a wrestler is featured in this post performing one sort of set-up, it is not meant to imply that this is the only sort of set up that wrestler uses or even one they typically use. I also should say that many elite wrestlers are well versed in setting up shots in all three manners.

The first family of set-ups (and these are not listed in order of importance or frequency) is control ties. Control ties are holds which force their way through an opponent's "head/hands" defense, not with finesse, but through power and leverage. Two of the most widely used are the Russian tie and the underhook. This is not an exhaustive list of techniques, but I need to make some concessions to brevity.

This from the same Stephen Neal match as above, Steven blocks the knee of his opponent and leverages him over it with the underhook.

Here is Lee Weber from the University of Iowa hitting a dump (yes, we can call it many other things, but I choose this one) off of a Russian tie on Mark Munoz. Notice that there is enough downward torque on the shoulder to pull Mark all the way to his hip.

The second school is what I will call "tie-clearing" set-ups. For every wrestling tie a wrestler achieves, the opponent is forced to engage in a counter tie. Wrestlers "hand-fight" in an attempt to get a favorable tie where they can clear the opponent's tie, which opens a pathway to the legs. Watch a great example of one of these from current world pound for pound best Besik Kudukov against the USA's own, Henry Cejudo.

This is fundanental stuff and beautifully done. Kudukhov achieves inside control with a high hook over Cejudo's tricep. In turn, Cejudo ties up on the outside of Kudukhov's arm. With a classic "hair combing" motion, Kudukhov clears Henry's arm and shoots an inside-step (high crotch) single. Hold clearing set-ups would include chops, v-blocks up and forward, snaps, elbow-offs, shucks, slide-bys, arm-drags, wrist peels, and much more. I could show a million more sweet GIFs, but I have to keep moving.

Because these first two schools of set ups contain holds and situations mostly peculiar to wrestling (except underhooks), I theorize that the transition of a wrestler's leg attack success will be based on their comfort with the third family of set ups: Motion and Timing. (The other important factor is raw speed, but that would not be NEARLY as interesting a topic to post about.)

Motion and timing shot set-ups are based on moving in a specific pattern and/or waiting for the exact moment when an opponent is out of position and vulnerable to attack. These set-ups can be heavily technical and conscious tactics or simply the result of someone's freakish and annoying ability to unconsciously divine the perfect moment to shoot. Motion and timing set-ups can manifest themselves in a variety of techniques

Here we see an ankle pick from a collar-tie, the ultimate timing and motion takedown from the master of the technique, Cael Sanderson. Here is part of his sublime performance against WVU's Vertus Jones in the NCAA finals. Put in simple terms, Cael circles to get the opponent's foot exposed, grabs the ankle, and pushes the head over where the foot once resided. Cael has to take a few stabs at it this time, but the effect is the same.

In one of their NCAA title matches, Chris Pendleton of Oklahoma State hits a gorgeous misdirection low single on Missouri's Ben Askren. He makes a very subtle motion that causes Ben to pull back his left leg just for a heartbeat, and then is in on Ben's right ankle.

As a counter to a shot:

In the finals of last year's World Team Trials, Cael Sanderson executes this perfectly timed re-shot on Jake Herbert. It has to take place at the exact moment an opponent disengages from his own attack.

The above clips demonstrate a variety of different techniques, but the common denominator that allows them all to be successful is a finely honed sense of wrestling timing. Any elite wrestler can execute MMA appropriate takedown techniques (mid-level to high singles and doubles) with requisite proficiency. It is my oppinion that his command over timing and motion are what is most important. Here is an example of Cael Sanderson seamlessly transitioning his technique when his patented ankle pick fails to yield an immediate takedown over Josh Lambrecht. Cael has the timing to get to the leg; once he is in, it is comparatively easy for him to adapt to the situation and slide up to a power double.

Cael was not a bruiser, he was not a head-banging blast doubler and he was not a hulking grinder, but because of immaculate timing and understanding of spacing and motion, I have no doubt he would have had no problem adapting his repertoire to the meet the demands of MMA wrestling.

In modern MMA, elite fighters without a wrestling base are becoming more and more wrestling savvy - particularly in shot defense. The approach of forced takedown attempts and guileless shots without set-up is becoming ineffective and risky. A premium must be put on setting up shots in an MMA-relevant manner. To me, the school of shot set-ups which translate the most readily to MMA are timing and motion based set-ups. I believe that when evaluating the potential effectiveness of a wrestler's MMA transition, more attention should be paid to how he sets up his shots then what actual shots he uses.

This is just a theory, I have neither the time nor the means of proving it empirically. I also might be WAAAAY wrong.