The sizzling main course of UFC 145: Jones vs. Evans is a grudge match between former training partners for the UFC light-heavyweight championship. Unparalleled phenom Jon Jones will defend the strap against former title-holder Rashad Evans this Saturday night on pay-per-view.

So ... the MMA sewing circle is gushing over Jon "Bones" Jones (15-1), and for good reason. From a flat-out performance standpoint, he's sniped off 3 legendary light-heavyweights, all former champions, who have anchored down the top-5 world rankings for the last few years. Mauricio "Shogun" Rua was callously unseated from the throne with a spearing body punch and follow-up knee for a 3rd-round TKO at UFC 128. Quinton "Rampage" Jackson was pelted with mile-long kicks and punches before succumbing to a 4th-round rear-naked choke. Lyoto "The Dragon" Machida was engulfed in a cocoon-like clinch and choked unconscious with a 2nd-round, Gable-grip guillotine.

But of course, as with any superstar in any sport, the hysteria goes beyond the numbers. A fighter hasn't been branded with this level of invincible mystique since the great Fedor Emelianenko, who also had a psuedo-defeat by cut that was disdained like Jones' only stain on the carpet; a DQ against Matt Hamill for illegal elbows in a contest he dominated with rag-dolling clinch throws. But -- quick! -- answer this question: when have we seen Jones in trouble or struggling? Unlike Emelianenko, there is no instance of in-ring roller-skating after a Kazuyuki Fujita punch nor a suspicious, side-mount kimura attempt from K-1 kickboxer Mark Hunt.

Barring a round that Stephan Bonnar arguably eked out in their 2009 meeting at UFC 94, the gleaming example of Jones' mortality is the first frame of his last outing, which most penciled in as a 10-9 for Machida. Now, it's no simple task to replicate the style of someone who basically emerged from the womb in a classic Shotokan horse stance but, against Jones, Machida's evasive hocus-pocus and mythical karate tomfoolery was not at play.

Instead, Machida whittled his elaborate arsenal down to a basic boxing array and relied on straight, fast and well-timed punches. What makes Rashad "Suga" Evans (14-1) an interesting challenge for Jones is that his lightning-quick boxing prowess is the aspect he's improved the most and now stands as his best weapon. The former MSU wrestler and TUF winner has harnessed his raw instincts and athleticism into a fine-tuned and functional medley of fluid boxing and formidable wrestling. The role Machida assumed against Jones is standard operating procedure for Evans, who will also be fueled by an unamicable split with Greg Jackson and a seething desire to knock Jones off the pedestal he's been placed on.

Complete analysis in the full entry.

Appearing as an unknown and drastically under-sized heavyweight on TUF 2, Rashad's god-given talent for fighting was obvious. Billed as a wrestler, Evans wreaked havoc on the heavyweight giants with superior agility, an unmatchable pace and unrefined but highly effective striking. He dropped down to light-heavyweight after defeating 4 opponents to clench the TUF title but immediately faced criticism for his purported inability to finish (all TUF wins were by decision).

Those cries heightened to a pitch when Evans registered more decision wins (Stephan Bonnar, Sam Hoger), then were muffled slightly by back-to-back stoppages (Jason Lambert by TKO, Sean Salmon by head-kick KO) and, later, disappeared altogether after Evans beheaded Chuck Liddell with a scorching overhand right and blasted out Forrest Griffin with ground-and-pound to become champion. A Machida straight-left made for an ephemeral tenure at the top, which was Rashad's first and only loss, yet Evans has gathered up 4-straight victories to earn another crack at championship gold.

The Match Up Parameters

The bullets above are my prioritized list of crucial dynamics. Since there's no need to reinvent the wheel, the analyses on the striking of Jones and Evans written by Fraser Coffeen and Jack Slack (below) will be the frame of reference for the match-up mechanics.

UFC 145: Just How Good Is the Striking of Jon Jones? -- by Fraser Coffeen

To answer Mr. Slack's query about Evans being able to stand with Jones, he probably doesn't have a choice in the matter because of distance. While both competitors have a wrestling background, their striking accounts for the bulk of their offense, yet both excel at setting up their grappling with strikes and threatening with takedowns to create striking opportunities.

I cannot over-emphasize how integral Jon Jones' 84.5" reach length is, which is almost incomprehensible. To put that in perspective -- the tallest fighter in the UFC, the ultra-gangly Stefan Struve who stands an inch shy of 7'0" tall, falls a half-inch short at 84". In a sport where a fraction of an inch can make the difference between a missed punch, a grazing blow that opens a cut, a knockdown or a knockout, 5" is a monumental advantage, and the length of Jones also facilitates his kicks, clinch (leverage), takedowns and submissions.

These go-go-gadget proportions equate to a nightmare for an opponent trying to get inside, as Jones can cover almost a half-foot of extra range and buys more time to react defensively. In plain terms, to inflict damage or mount any sort of viable offense, a fighter must be in contact-range to do so. This is where everyone but Machida has floundered, and Jones eventually made an intelligent range-adjustment by locking horns with Machida and using -- here it is again -- his height, length and leverage in the clinch to finagle the guillotine choke.

Rashad clocks in with an average to stubby reach length of 75", meaning that, in round numbers, Jones will get an additional 5" extension with either hand. This disparity looms as the biggest riddle for Rashad to solve, which Jack Slack keenly notes in his observation of Rashad's distinctly closed fighting stance. 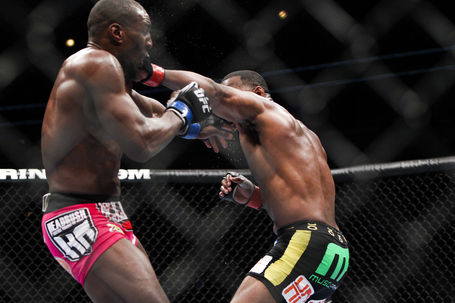 "To compensate for this lack of reach, Rashad often chooses to stand from a particularly side on stance - just as the Diaz brothers and BJ Penn opt to. This lengthens his jab, but also means that the back of his lead leg is especially vulnerable to low kicks."

The photo to the right (by Esther Lin for MMAFighting) depicts Rashad's closed stance. As mentioned by Jack Slack: you can see how his lead leg protrudes forward and makes an ideal target for leg kicks, how he'll get increased travel on his jab and decreased travel on his right cross.

Compared to a more traditional or open stance, this picture also shows how Rashad's chin is protected well by tucking it behind the left shoulder. Evans formulates a pretty sound straight-on attack like this and, though he doesn't rely heavily on lateral motion, he's crafty with faking or committing to dropping levels for takedowns. So, while Jones will scurry out his corner with one hand on the mat, swing from the upper-right to the lower-left of the pocket with body shots or just throw a plethora of wacky angles at his opponent, Rashad's motion is more simplified and deliberate, consisting of quick, straight punches with the element of surprise takedowns thrown in.

With distance and range going to Jones by default due to his stature, the onus is on Rashad to carve out a pathway through the forest of Jones' long limbs -- if he stays on the fringe, he's within Jones' striking range but outside of his own. That leads us to the pivotal factor of the motion and angles that each competitor employs to set up their offense.

Motion and Angles to Address Distance and Range

Rashad's stance is simply not conducive to a range-fighting scenario. While a popular recommendation is to target his extended lead leg with low kicks, Rashad has become adept at opening his stance and exploding forward to plunge his powerful right cross or pouncing with a takedown attempt to counter the incoming kick. I expect Rashad to be coiled and ready to spring with either technique if Jones swings any kicks from the fringe.

If he decides to lead the exchanges, the gameplan he unhinged Rampage with will likely ensue. Evans capitalized on his hand-speed, agility and dual-pronged wrestle-boxing attack better than ever before. Though it's worth mentioning that Rampage is known for his flat-footed stance, Evans wisely baited him with takedown attempts to lower his hands in anticipation of defending the level drop before coming back high with heated flurries. Conversely, when Rashad settled in with a series of striking onslaughts, Rampage was focused on defending punches in an upright stance and subsequently blind-sided by power-doubles.

... Jones's motion tends to leave a few defensive openings. His motion straight back opens him up for a straight forward blitzing attack, which is what Machida used so effectively in round 1. Evans has shown this type of attack before, such as when he dropped Rampage, so it is something for Jones to watch for Saturday night.

For defense, I would say Jones's primary tactic is maintaining range. He's superb at using his range to keep fighters from getting in too close. When they do get close, he either brings his hands up and moves away to reset, or secures the clinch and takes them down. It's rare that a fighter has been able to get inside on Jones and continue striking. However, if a fighter could achieve that position (a huge if), they could find themselves in a nice spot to inflict some damage on the champion.

Fraser Coffeen astutely recognizes a danger-zone for Jones within the motion and angles he employs for the range, though his concerns are when breaking engagements and retreating back to a comfortable distance. Jones has performed some footwork no-no's by consistently crossing his feet and retreating in a straight line. The latter is the real hazard, as Machida found the mark with charging combinations by measuring the depth of Jones' predictable pattern backwards.

With Rashad having a striking style that caters to frenetic bursts of in-and-out striking, which is how Machida deciphered the range puzzle, he might not even have to stress about the perils of shrinking the gap if he lays back, lets Jones lead the exchanges and counter-strikes when Jones comes to him.

Who Leads Exchanges and Dictates the Pace

The fighters who came at Jones full-force had no luck. In his earlier performances, Jones cemented how devastating his clinch-work is by tossing around the likes of Stephan Bonnar, Andre Gusmao and Matt Hamill. Then, when his clinch was firmly established and his opponents were a little hesitant to tie up, Jones hovered to the floor to upend savvy wrestlers Vladimir Matyushenko and Ryan Bader with low-level takedowns.

Lately, Jones has been content to handle his business standing and lead the exchanges. It seems like he wants to make a strong statement against Rashad and has grown more and more confident with his striking, so I expect the same tonight. Jones could play a mind game with Rashad by hanging back and waiting for him to initiate, but I suspect that Rashad will insist on assuming the counter-striking role. On the same token, Rashad could have the element of surprise by vaulting out of his corner and putting it on Jones with a touch of recklessness, or even alternating between the two varying speeds.

To summarize, in a battle that will be so largely dictated by range and distance, it's hard not to side with the longer fighter who excels at range-fighting over the short-limbed competitor who's struggled with it. Plus, Jones has more options if one singular range isn't working for him and can launch straight-on attacks with quick boxing or maneuver into the clinch to pour on strikes and submission attempts. Rashad will not have that luxury.

My Prediction: Jon Jones by submission.