UFC 145 Judo Chop: Just How Good Is The Striking Of Jon Jones?

Share All sharing options for: UFC 145 Judo Chop: Just How Good Is The Striking Of Jon Jones?

We are fast approaching one of the most anticipated UFC fights in years as Jon Jones and Rashad Evans finally meet at UFC 145. Given the history between these two friends turned enemies, it's only natural that most of the pre-fight discussion has been focused on the narrative behind their fight. And make no mistake, it's a great and compelling story. But that story is only half of what makes this such a great fight. The other half is what will take place inside the Octagon Saturday night. Because these aren't just rivals, they're also two of the finest fighters in the world.

And so here, we'll focus not on the rivalry, but on the techniques. Specifically, the stand-up techniques of the champion Jon Jones. Be sure to read the excellent analysis of Rashad Evans's stand-up done earlier this week by Jack Slack to get the other side.

In 2011, Jones established himself as one of the pound for pound greats in MMA today - a Silva/GSP-esque undefeatable phenom. Yet there are some detractors who say that he is not as good as the hype may always indicate. And those detractors generally point to his stand-up game, which some view as using flash and reach in place of solid technique. Here then, we'll break down Jones's stand-up and see what we can learn. We'll look at the following areas:

Let's see if we can find a crack in Jones's armor that Evans can exploit Saturday night.

Before we dive in, let me just say that I am not someone who sees MMA striking as being necessarily the exact mirror of pure boxing, Muay Thai, or K-1 striking. MMA fighters have different needs in their stand-up, so comparing their technique to the technique used by a Manny Pacquiao is not entirely fair. But there's still room for improvement in the striking of many MMA fighters, and Jon Jones is no exception.

This is not an area where Jones shines. He tends to be flat-footed, which can slow down his movement. There's a plus to that as it helps him maintain cardio by keeping his legs more relaxed, but against Machida that slowness caused by keeping his feet planted allowed him to get caught a few times.

Jones also tends to switch stances often, moving freely between orthodox and southpaw stance. This has good advantages as it opens up his offense and keep his opponent guessing. That ability to confuse his opponent is one of his greatest striking strengths, which we'll address more when discussing his offense. While he likes to use the southpaw stance, he doesn't always use it to his best advantage. When one fighter is standing southpaw and the other orthodox, the way to gain the dominant position is to move your lead foot to the outside of your opponent's. That gives you more options and more power in your strikes. Jones does not do this, and yields the dominant position to his opponent when in southpaw. Small, but a mistake.

Along those same lines, Jones tends to overuse forward and backward movement on his feet, rather than coming in at angles. Compare him to a fighter like Frankie Edgar and you'll see a huge difference. Edgar will come in from the side and move off to the side when evading. Jones often comes straight in, and moves straight back. His significant reach advantage lets him get away with this. but it's not the best use of movement.

Overall, I would characterize his footwork as passable, but in need of some improvement. He makes it work, but focus on improving it could strengthen his game. 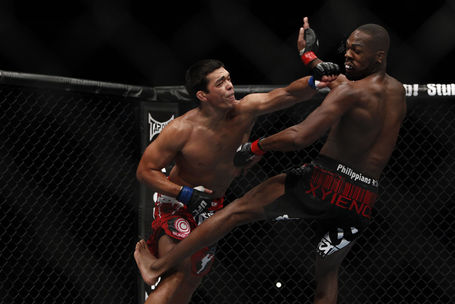 Lyoto Machida gets inside and connects on Jon Jones at UFC 140. Photo by Esther Lin, MMA Fighting

As mentioned above, Jones's motion tends to leave a few defensive openings. His motion straight back opens him up for a straight forward blitzing attack, which is what Machida used so effectively in round 1. Evans has shown this type of attack before, such as when he dropped Rampage, so it is something for Jones to watch for Saturday night.

For defense, I would say Jones's primary tactic is maintaining range. He's superb at using his range to keep fighters from getting in too close. When they do get close, he either brings his hands up and moves away to reset, or secures the clinch and takes them down. It's rare that a fighter has been able to get inside on Jones and continue striking. However, if a fighter could achieve that position (a huge if), they could find themselves in a nice spot to inflict some damage on the champion.

Jones doesn't use a lot of head or body movement to slip strikes, which leaves him a bit exposed. He also has a tendency to lower his level and bring his head down when he starts to get hit, which is a bad habit for any fighter, but particularly unfortunate for a taller fighter like Jones. By bringing his head down, he nullifies his height advantage, giving his opponent an opening.

Finally, he uses a lot of hand movement from the Anderson Silva style, but that can leave his chin exposed. He also tends to not bring his hands back to their defensive position quickly after throwing a punch. Again, this keeps his chin exposed, and a well-timed counter-puncher (Machida) can capitalize on those small gaps.

Defensively, as in his footwork, Jones has gotten by, but could use some tightening up. In particular, the dropping of his head and hands in defense is a concern, and whenever he does finally lose, I suspect that will be the culprit. 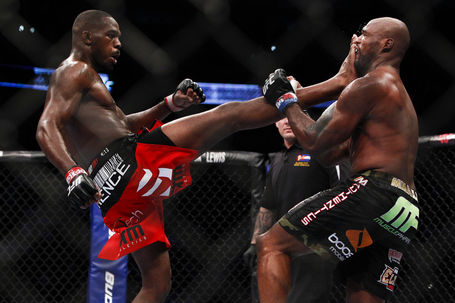 Jon Jones uses his range with a front kick on Rampage Jackson at UFC 135. Photo by Esther Lin, MMA Fighting.

I've spent a lot of time pointing out some flaws in Jones's game, so here's the chance to state the obvious: despite any technical flaws in footwork and defense, Jon Jones is a very dangerous striker. And that danger comes from his offensive output.

Jones has a natural gift in his reach, but it's his use of proper technique that allows him to best capitalize on that reach. He's done a great job building his game around this asset - teeps, jabs, and big head kicks are major weapons for Jones. That head kick in particular shows fantastic use of range as he really extends on it. All of these strikes push his opponent back and out of their attacking range, while allowing Jones to continue his own assault.

As his career has progressed Jones has evolved from more single shots to combos. Starting with the Shogun fight, we've seen him mix strikes together much more effectively. But he is still deliberate with those shots, choosing each punch and kick carefully. He's not a fast paced, 3-4 strike combo kind of fighter, instead selecting each successive strike to follow up on the previous one and thread its way through an opponent's defense.

For both his leg kicks and head kicks, Jones tends to at times sacrifice power for speed. He'll throw kicks very quickly without fully turning over his hips. This allows him to get the kick off fast, but doesn't do as much damage. In his recent fights, we've seen that his striking is more about accumulated damage rather than the single flash KO, and this style of speed over power plays to that.

And of course, his strikes are incredibly varied. He has an absolutely huge arsenal of knees, kicks, elbows, punches, plus a seemingly endless capacity to bring in new strikes, all of which keeps his opponents guessing.

Offensively, Jones's striking is up there among the best in the UFC. He uses his reach to perfection, and has built a great game based on slowly breaking his opponent down.

In the end, the good from that offense significantly outweighs the bad from the defense and footwork. I think it's fair to characterize Jones as a very skilled striker. But he's also a striker with real, tangible flaws. So far, only Lyoto Machida had any success using those flaws to his advantage, and Machida is the best technical striker in the division. And he still ended the fight unconscious.

Does this mean Jones is unbeatable? No it does not. But it does mean that anyone looking to beat him will have to exploit those holes perfectly, while surviving the offensive onslaught. It's not an easy task. Is Rashad Evans up for it? I suspect not, but I look forward to finding out.