Share All sharing options for: UFC 145: Can Rashad Evans Stand With Jon Jones?

Through the build up to the UFC 145 grudge match between Jon Jones and Rashad Evans, one factor has been continually thrown around as the key to this fight, Rashad Evans' chin. Some insist that it is so weak that he could donate it to a Jewish wedding. Others point to his only being knocked out once in his entire career, during which he has fought heavyweights, and insist that his chin cannot be as bad as it is commonly believed to be. The chin (here meaning a man's ability to take a punch) is a vague and abstract concept. It is also one which I, and most others, cannot address with any definitive science. The merits and flaws of Rashad Evans' striking, however, are a different matter - and herein we shall address them. And be sure to check back later this week for Fraser Coffeen's breakdown of the striking of Jon Jones.

Before we start, let us establish the obvious. Rashad Evans hits very, very hard. He staggered the iron jawed Quinton Rampage Jackson, and was the first man to knock Chuck Liddell legitimately unconscious with one punch (to a point where Chuck wasn't even attempting to defend himself). Heavy hands, however, do not a great striker make. It is fairly safe to assume that Rashad possesses the power to knock Jon Jones out. Plenty of light heavyweights do. Getting close enough to Jon Jones to do so is Rashad Evans' greatest problem.

Evans cannot shoot in on Jones from range. While this would fly against a lesser opponent, it will get Rashad hurt if he attempts it here. Therefore, Rashad will be looking to strike with Jones, with the ultimate goal of either knocking him out, or of taking him down and blanketing him.

The three key weaknesses in Rashad Evans' stand up game are:

More analysis after the jump...

Rashad is not a big light heavyweight, he might not even be a particularly big middleweight if he chose to cut to 185lbs. At just 5'11", he carries a 75 inch reach. Against Jones this reach disadvantage will be even more pronounced due to the height disparity - Rashad will be forced to punch upward, and his favoring of circular punches over linear ones will mean that he needs to be almost chest to chest with Jones to connect. 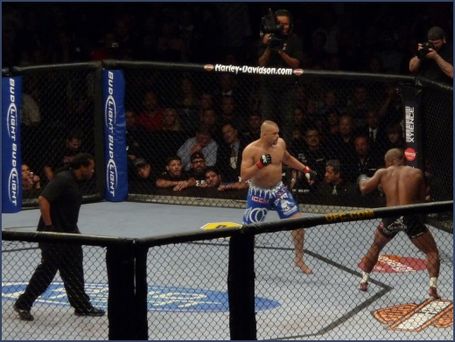 To compensate for this lack of reach, Rashad often chooses to stand from a particularly side on stance - just as the Diaz brothers and BJ Penn opt to. This lengthens his jab, but also means that the back of his lead leg is especially vulnerable to low kicks. These often cut into the hamstring, the most tender part of the upper leg.

While most men are uncomfortable kicking against Rashad Evans due to his stellar wrestling pedigree, Lyoto Machida found a great deal of success with kicks against Evans. Lyoto, fighting southpaw, could not use his rear leg to punish Rashad's turned in lead leg, but was able to use short kicks to the calf with his leading, right leg to break Rashad's balance several times throughout the fight. This illustrated another disadvantage of having the lead foot turned in; it is easier to have one's foot kicked out from under oneself.

Rashad often stands so side on that he needs to take an enormous lunging step outward, like that of Babe Ruth, in order to throw his right hand. A quick look at the Liddell fight reveals how stunted his right hand is by his stance. Liddell was caught rushing in to throw a right uppercut without set up or distraction (a self destructive striking strategy) and still Rashad was only able to reach with the inside of his fist and fingers, rather than a solid punching surface. Obviously he knocked Liddell out, but Jones will not be that close even if he chooses the same ill-advised lead right uppercut.

Rashad's speed is an enormous asset, and this really showed against one dimensional brawler, Quinton 'Rampage' Jackson. Jackson's only assets at this stage in his career are his powerful hooks, having abandoned his wrestling and ground and pound almost entirely. Rashad was able to run rings around Quinton Jackson by bouncing around, exploding in, and following through to a takedown with beautiful set pieces. The sequence in which Rashad threw a left hook, followed by a weave under Jackson's counter hook combined with Evans' own right hook to the body, into a running takedown, was a marvel to behold. The only men with comparably brilliant and varied set ups for their takedowns from long range are UFC welterweight champion, Georges St. Pierre, and a 2003 - 2008 era Fedor Emelianenko.

Against opponents whose intention it is to fight at long range, Rashad struggles. It took Evans three rounds of eating punches from Forrest Griffin (one of the lightest punchers in MMA) before Evans managed to chase Griffin down. Against Machida, who was waiting for Rashad to attack, Rashad looked tentative throughout the fight as Lyoto moved straight backward from all of the techniques in Rashad's limited arsenal of strikes. Rashad's side on stance meant that he could only lead with his jab, making Lyoto's counter simply a matter of reflex, rather than thought.

Against Jones, Rashad will be forced to deal with great distance again. But where Machida simply kicked into this distance, and could not punch without closing the range, the enormous distance which Rashad has to navigate against Jones will see him under fire from punches the entire time. Jon Jones' length is his most obvious asset in the stand up - his technique being slightly above average at best - but his understanding of how to use this reach is unparalleled. A quick look at a Jon Jones fight will show how rarely his opponent comes close enough to throw a punch without Jon hitting them first. Jones uses low kicks, jabs, and even the very controversial Jackson's MMA favorite, the push kick with the sole of the foot against the opponent's knee joint.

Put simply, Jon Jones fights how Stefan Struve should fight. One has all the kickboxing pedigree in the world yet routinely gets knocked about by men who are half his size, and one is largely untouchable. Rashad's vulnerability to low kicks will hurt him if he stays in the open, and closing the distance from a side on stance will certainly be difficult.

Rashad Evans, in the head movement department, suffers from the same affliction that Cain Velasquez and Frank Mir do. Evans' head movement looks good, but is almost entirely ornamental. A prime example would be his fight with Lyoto Machida. Immediately before getting knocked down, Rashad bobbled his head around several times, then stood bolt upright as he lunged in with his actual attack. Lyoto was not even looking at Evans as he threw his counter, knowing that Evans' head would stay in position.

The same happened against brawlers, Thiago Silva and Rampage Jackson. When Rashad was able to run in and out, he landed heavy shots and took them down. Then he stood on the outside, wiggled his head about, stopped, and got caught with a big punch by both men.

Jon Jones has proven capable of exploiting holes in an opponent's offense. Against Machida he switched stances, knowing that he could land a rear hand hook against Machida's unguarded right side. It is pretty safe to assume that Jones will look to counter Rashad's weak head movement on offense. 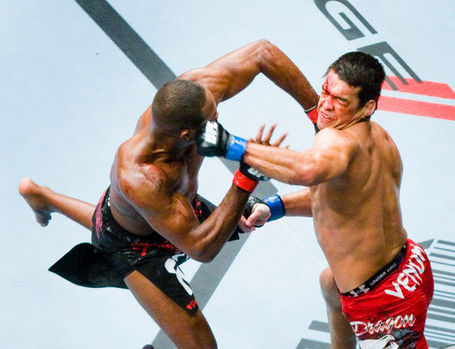 Rashad's Keys to Victory Against Jones

This is a terrible stylistic match up for Rashad Evans. It's not as terrible as Jones was for Rampage, the latter being a shade of his PRIDE era self. Jackson's game had quite literally devolved to using only hooks, and his 73" reach was even more lacking than Rashad's will be. Rashad's best bet is to knock Jones out early or get him to the floor and lay on him. Jones is an excellent wrestler, so Rashad will be forced to take the initiative by striking with Jones.

Evans has enormous power and speed in his punches, so a knockout is never truly off of the cards. But closing the distance will prove tough, and his striking didn't look that crisp technically even against Tito Ortiz. If Rashad gets stuck on the outside he will be kicked into a bruised mess. If he runs in without moving his head, as he is wont to do, he will get hurt and likely finished. Really, Rashad needs to do exactly what he did against Rampage; spring around and get to Jones' chin as early as possible. Jones has not been hurt yet in the octagon, and his opponents have all given him time to establish his game and work methodically. If Rashad can land a good blow on him early, we may see Jones mentally collapse due to lack of experience of adversity.

Finally, a potential wild card in this fight is that even Rampage Jackson, as averse to kicking as BJ Penn, found some success in kicking Jones' gangly legs. If Rashad continued to work Jones' legs, which have little muscle to serve as a shock absorber, he may be able to stop Jones kicking and moving so freely, and make him stand as still as Thiago Silva and Quinton Jackson did.

Want to learn the techniques of Junior Dos Santos, Anderson Silva and Roy Jones Jr.? These and the techniques of 17 other elite strikers, are broken down in detailed photography in Jack Slack's new ebook Advanced Striking: Tactics of Kickboxing, Boxing and MMA Masters, which is out NOW!