DaMarques "Darkness" Johnson (15-9) appeared on the "US vs. UK" version of TUF and lost to James Wilks in the finals. Since then, he's pieced together a 4-2 clip in the Octagon. That streak began with back-to-back stoppages (Edgar Garcia by triangle, Brad Blackburn by TKO) but was halted by Matt Riddle, who finished Johnson in the 2nd by TKO. He would alternate results in his last three, forcing Mike Guymon to tap to a constricting body triangle, submitting to a flurry of elbows from Amir Sadollah and then roasting Clay Harvison by 1st-round TKO. 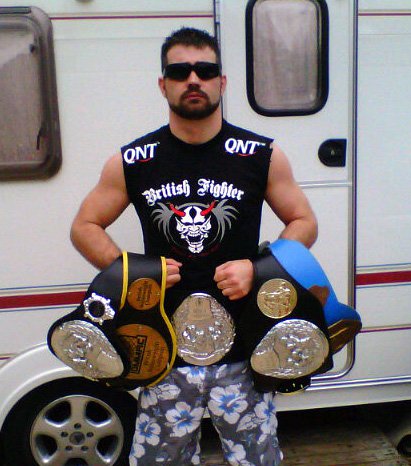 John "The One" Maguire (17-3) clawed his way to a unanimous decision win over Justin Edwards in his Octagon debut at UFC 138. Training out of the Tsunami Gym in London, England, Maguire is a self-proclaimed "Pink Belt in Gypsy Jiu-Jitsu." To expound on that unorthodox calling card -- Maguire is a legitimate gypsy traveler who idolizes Bret "The Hitman" Hart, a pro-wrestler known for being fashionably clad in a pink singlet.

Maguire is a former Cage Gladiators middleweight and Cage Rage welterweight champion. Joe Rogan mentioned on the UFC 138 broadcast that he'd seen video of Maguire submitting a BJJ black belt, who turns out to be Roger Gracie product Andy Roberts. Of Maguire's 17 wins, 9 are by catch with 3 TKOs and 5 decisions. He's won 9 of his last 11 with Simeon Thoresen, a Norwegian debuting on this card, and BAMMA middleweight champ Tom Watson responsible for the losses.

Gifs and analysis in the full entry.

Johnson drew a favorable match up in Harvison in his last outing and out-classed him, quickly and violently. He's a fairly polished boxer who complements his diverse hands with occasional kicks and knees.

With sound agility, good hand speed and a lanky frame with a long reach (75"), Johnson can be a terror on the feet when he's on. He can leave himself open to counters because he's generally focused on attacking -- his chin used to be somewhat proven, having a sole loss to strikes back in 2006, but nowadays his last two defeats have come by way of TKO.

Though he's billed as a blue belt in BJJ, Johnson has been training submission grappling under the all-knowing Jeremy Horn in Utah since 2004.

He's been kind of hot and cold in the clinch and grappling departments. His wrestling and clinch throws look to have improved and finishing Guymon with a back-mount body triangle is a sign of increasing awareness. 5 of his 9 losses, however, are by submission. Though we've only seen Maguire in a high-profile match up once, he should have a significant edge on the mat.

Persevering through a hammering punch that floored him in the first, Maguire turned the tables against Edwards with an active clinch game and clever transitions. He was sneaky with tactics like baiting with a kimura to slip into standing back control, the position from which he lands the belly-to-back throw to the right. Maguire was able to ground the fight through creative intelligence more so than exemplary wrestling. Throughout the encounter, Maguire noticeably conducted himself with the cool composure of a veteran.

The sequence to the left is a good example of how wily of a grappler Maguire is. From back control, he anticipated Edwards' attempt to spin into guard by slinging his leg over Edwards' shoulder to transition to a deep armbar (Edwards was saved by the bell). Maguire's striking didn't look too shabby either. A southpaw with a wide stance, he flicks out a lot of jabs and connected with a few hard inside low kicks. Most of his intentions seemed to be geared toward moving into a tie-up rather than jousting strikes in open space. Watson is the only fighter to finish Maguire via strikes.

Despite his success against Edwards, I'm still in the "show me" stage with Maguire. His debut proved he has an A-level ground game, a stout clinch and a well rounded menu. Johnson will be a significant step up in competition and I see Maguire struggling with his quickness and explosiveness on the feet. If he can force a clinch with any kind of consistency, Maguire will be one step closer to imposing his grappling advantage, so I expect Johnson to recognize and respect this by using footwork and motion to keep from being pinned against the fence.

My Prediction: DaMarques Johnson by TKO.

All gifs via Zombie Prophet of IronForgesIron.com