In the wake of Ronda Rousey's thrilling - and vicious - victory over Miesha Tate, one wouldn't be faulted for thinking that WMMA has arrived. That the sport had final won over all its detractors and that it would finally be allowed to occupy its own space alongside its male counterpart as an accepted part of the combative sports pantheon. Unfortunately, that will most likely not be the case, for those holding the most antagonistic views do so because they are against the very idea of women fighting. For them women's MMA is akin to a freakshow, which has been hoisted upon them as legitimate sporting competition only to take attention away from the real fighters who happen to be men. Women, the thinking goes, were never meant to take part in the fight game, as evidenced by the fact that it is only a recent invention, that throughout history women have shown no inclination for it. That individuals such as Rousey are merely anomalies. What these detractors fail to note is that women's prizefighting is not a recent invention and its roots reach all the way back to its very beginnings. 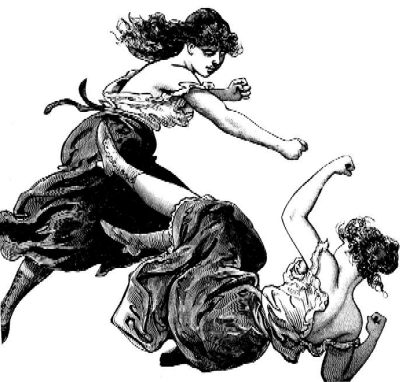 The sport of boxing, and the profession of prizefighting, gained widespread popularity in England in the early 18th century, in part thanks to the accomplishments of James Figg. Crowned as the "Champion of England" in 1719, the very first holder of what would become the linear heavyweight championship of boxing, he promoted himself and pugilism tirelessly. It was a very different sport in those nascent days, a complete martial art that included ground-fighting and weapons that eventually evolved to a standing, fist-only striking sport.

Even in these earliest times, female prizefighters were present, with the first recorded match between "two of the feminine gender", appearing in the June 23, 1722 "London Journal" where it makes mention that the women "maintained the battle with great valour for a long time, to the no small satisfaction of the spectators." For the remainder of the century women and women's "boxing" could be found being contested with regularity in London, sometimes with a level of parity to men that was shocking to the sensibilities. Martin Nogue documented in 1728 in his "Voyages et Avantures" [EN 1] of seeing women and girls fighting the same as the men, including being stripped from the waist up: "Des femrnes des filles même combattent de la même forte, dépouillées jusqu à la ceinture."

Later countrymen would look back in horror at the popularity and acceptance such a "sport" held with their predecessors:

"The most revolting and disgusting spectacles of this kind were prizefights in which women were the competitors for the stakes, and, half-naked, battered and bruised each other, without cause or provocation, to the heart's delight of a "respectable" circle of beholders! Under date June 22nd 1768 we read Wednesday last, two women fought for a new chemise valued at half a guinea, in the Spa fields, near Islington. The battle was won by a woman called ‘Bruising Peg', who beat her antagonist in a terrible manner." [EN2]

That Alexander Andrews would, in 1855, point to "Bruising Peg" as an example of the immorality of earlier London shows the changes that had taken place over the intervening century with regards to women's roles. Sure "Bruising Peg" was renown for her brutality, but she was also immensely popular during her day, enough to earn her keep by giving boxing exhibitions at a London theatre (where she she was often accompanied by Macomo the Nubian lion tamer).

The acceptance of women in boxing continued well into the late 18th century, with support being offered from some of the biggest male stars of the day. In1795, the legendary champions Daniel Mendoza and 'Gentleman" John Jackson even acted as seconds in a fight for a prize of 11 guineas between Mrs. Mary Ann Fielding and a woman known only as the "Jewess of Wentworth Street". For that sum the two fought for 80 minutes during which there was over 70 knockdowns between them.

Not every women had such accomplished corners, with the position usually falling to their husbands, who seemed to have no problems accepting that their wives demonstrated such unfeminine behavior.

"In August 1793, a pitched battle was fought in Elmstead, near Chelmsford, Essex, by two LADIES of pugilistic spirit. Being stripped, without caps, and their hair closely tied up, they set to, and for 45 minutes supported a most desperate conflict; when, although one of them was so dreadfully beat as to excite apprehension for her life, her husband possessed brutality enough still to prompt her to fight; but, through the interference separated." [EN3] 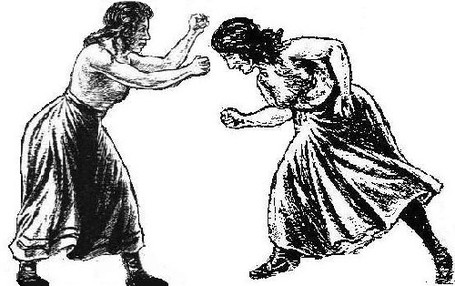 Perhaps no one exemplified these early female prizefighter better than Elizabeth Stokes, born Elizabeth Wilkinson, the first and greatest gladiatrix of the era. Her date of birth is unknown, first appearing amongst "the Fancy" in a 1722 (although she could very well be one of "two of the feminine gender" who appeared in the June 23, 1722 London Journal) a newspaper advertisement for an upcoming fight which read: 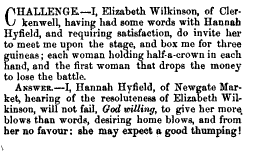 "CHALLENGE. - I, Elizabeth Wilkinson of Clerkenwell, having had some words with Hannah Hyfield, and requiring satisfaction, do invite her to meet me upon the stage, and box me for three guineas; each woman holding half-a-crown in each hand, and the first woman that drops the money to lose the battle.

ANSWER. - I, Hannah Hyfield, of Newgate Market, hearing of the resoluteness of Elizabeth Wilkinson, will not fail, God willing, to give her more blows than words, desiring home blows and from her no favour: she may expect a good thumping" [EN4]

The half-a-crown rule was a clever ploy by which Wilkinson could be assured that her opponents kept their hands clenched for the duration of the match, preventing them from using such foul tactics as pulling hair, clawing the eyes, scratching the face, or tearing the ears or breasts.

You can read the rest of the article by clicking here or by paying a visit to Head Kick Legend.