Strikeforce Tate vs Rousey: Was That The Most Savage Armbar In MMA History? A Short List Of Others

Share All sharing options for: Strikeforce Tate vs Rousey: Was That The Most Savage Armbar In MMA History? A Short List Of Others

The car crash effect gets us all. For some reason, we turn into rubberneckers and slow down our speeding vehicles to catch a brief glimpse of the accident causing all the delays and traffic jams. The same thing roughly applies to mixed martial arts - except we replace the metal and plastic wreckage with organic, human bodily damage as limbs get torqued beyond their capacities.

In a similarly macabre, but understandable fashion, the most savage of submissions in combat sports have been kept alive in the memories of fans for years through word of mouth, pictures and short video clips as some of the scariest bogiemen of the MMA and submission grappling worlds. We slow down and cringe when we see the limbs of skilled fighters stretched beyond breaking points and we cheer when they escape or groan when something snaps. Armbars have featured in some of the greatest and the grisliest submissions in MMA history, as well as in other combat sports.

On March 3rd, Ronda Rousey may have given us the single most savage armbar in the history of MMA. This submission was expertly applied and Miesha Tate, the former Strikeforce bantamweight champion, fought it with every bit of grit and toughness in her. Tate tapped long after the elbow had been forced from its customary place and the fight was stopped with the arm visibly wrong. This is a submission that should live on forever - both for the setting upon which it was delivered and for the technique and ferociousness of the joint attack. 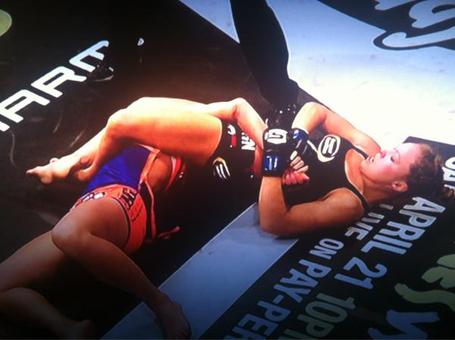 I may be swept up in Rousey-mania at this point, but I am prepared to call that the best MMA armbar of all time. It would be remiss of me not to give the other candidates a fair look and thus this post was written.

The Other Wrecks In Contention:

In the cage, Frank Mir breaks every limb he can get a decent grip on and Tim Sylvia's arm at UFC 48 was no exception. "Pop!" went the forearm bones and in came Herb Dean to stop the fight. Kid Nate did a UFC 100 Special EditionJudo Chop on this now-legendary submission almost three years ago. This Judo Chop made reference to what may have been the first time we combat sports fans sort of saw a nasty armbar in the UFC - Royce Gracie's eternity-spanning belly down armbar on Jason Delucia from UFC 2. Unfortunately, that particular armbar has to be hunted down on DVD or old VHS tapes.

After the jump, a GIF fest, starting off with the Mir/Sylvia submission and a few more special armbars that we wish we knew how to quit remembering and commemorating.

As I grudgingly admitted in the UFC 140 Judo Chop on the Big Nog kimura, Mir has overcome quite a few technical imperfections with stunning improvisations and truly chilling strength. The cup within Mir's shorts gave him the fulcrum, but Frank had to create the leverage and apply the force. Frank Mir has broken more body parts within the UFC cages than many elite level grapplers have in their career - and a good living has resulted from Frank doing so much skilled violence. Amazingly, Sylvia barely noticed anything wrong with his forearm and continued to lift Mir's entire heavyweight frame off the ground as Dean stepped in.

The armbar is threatened at the 1:08 minute mark and Jacare somehow keeps enough of a poker face throughout the breaking of the bone to convince the referee to let the match continue. The decision allowed Jacare's hand to be raised in victory, but he would have to forfeit the weight class final to Braulio Estima due to his inability to actually compete. Both Gracie and Souza now compete in MMA within the Strikeforce promotion - and with rumors on the horizon about Roger dropping to the middleweight division, they may face off again within the confines of the cage.

At Strikeforce: Overeem vs. Werdum, Magno Almeida lost a unanimous decision to Conor Heun - even after he made Heun's arm look like this: 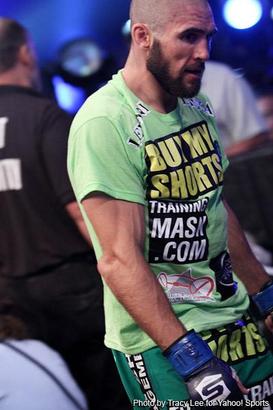 via Tracey Lee for Yahoo! Sports

A human arm generally should not look like that. Almeida's armbar was performed in Round 2, but Heun managed to free his now-mangled arm and continue to fight in an obviously limited, but effective manner en route to the unanimous decision.

Rousey is no stranger to this list, as her armbar of Julia Budd at Strikeforce Challengers: Britt vs. Sayers featured a superbly applied belly-down armbar - and maybe one of the worst refereeing performances in recent memory. Kim Winslow missed Budd's first tap, stayed well back from the action and only Rousey's surprisingly charitable decision to roll Budd over exposed the dislocated forearm and Budd's second tap to the inattentive referee. In each fight of Rousey's short career, we have been treated to a wonderfully skilled grappler who is able to make all roads lead to Rome - or to the Rousey-bar, if you will - again and again to gruesome and profitable fashion.

Amazingly, the Rousey/Budd fight was the second fight inside a month that Winslow would referee a bout in which an armbar dislocated a fighter's arm. At UFC 137 in October of 2011, Eliot Marshall dislocated Vera's left arm in the third round and due to Vera's unwillingness to tap, flailing limbs and Winslow's bad positioning, the fight continued to a decision.GIF via Zombie Prophet at Ironforgesiron.com.

At UFC: FIght for the Troops back in 2008, Steve Cantwell destroyed Razak Al-Hassan's right elbow with a superb armbar. Al-Hassan never actually tapped to it and Mario Yamasaki had to call an end to the damage and fight himself. This might be the closest analogue to the Rousey/Tate armbar within MMA in terms of where the unfortunate fighter's arm ended up, yet the stage and comparative skills of the fighters were not as memorable. A title fight between perhaps the two best athletes in a division trumps a Fight for the Troops armbar any day.

However, the best match for what Rousey did to Tate comes from Japan's finest bonebreaker - Shinya Aoki. In a jiu jitsu match against Kuniyoshi Hironaka, Aoki successfully went for a flying armbar. Hironaka for whatever adrenaline/insanity-fueled reasons decided to not tap and to try and tough it out. Aoki calmly proceeded to bend Hironaka's arm completely the wrong way around his leg and tell the referee in an almost lukewarm voice that the fight was over. Aoki and Rousimar Palhares might be the only two people on the planet that are more dangerous in an MMA fight to the health of limbs than Frank Mir (now that Masakazu Imanari has slowed down some).

In another phenomenal submission, Dustin Hazelett landed a helicopter armbar on Tamdan McCrory at UFC 91 after some phenomenally good grappling. The helicopter armbar hybridized with an omoplota and the creative seizure and positioning of the trapped arm forced "Barncat" McCrory to tap. McCrory's arm did not break, but the potential for a grisly snap was extremely high at the point that Hazelett stopped extending his arms and the referee began stepping in. This is perhaps a "could have been awful" submission rather than the multiple "hide the young 'uns" moments above.

Were any other memorable armbars misssed in the construction of this strange celebration of the ability of humans to break each other with perfect skill and grimly compelling fashion? Let us know in the comments.