While Brandon Saling was plenty impressive in throwing caution to the wind in a a brawl with Roger Bowling, his tattoos drew the attention of many watching the broadcast. While the nickname "White Steel" (which is also tattooed across Saling's torso) is just kind of lame, it takes on a bit of a new meaning when one looks at the tattoo on his left collarbone area.

Here's the tattoo in question: 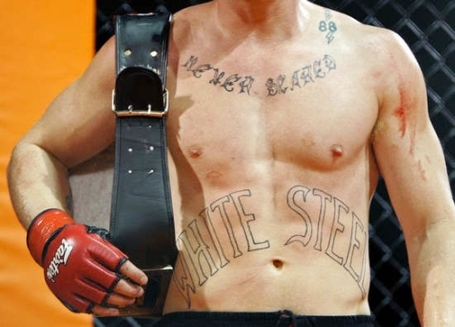 The 88 is a Neo-Nazi symbol for "Heil Hitler" and it appears to be surrounded by two SS style lightning bolts. Some history via Wikipedia:

Neo-Nazis use the number 88 as a code to represent the slogan Heil Hitler.[3] The letter H is eighth in the alphabet, so 88 is meant to stand for HH. The number is sometimes used in combination with the number 14 (e.g. 1488 or 14/88). In this context, the number 14 stands for the "Fourteen Words", which is a white nationalist slogan created by convicted terrorist David Lane. Examples of usage include: the song "88 rock'n'roll band" by the neo-Nazi band Landser, and the names of the groups Column 88, Unit 88, White Legion 88 and Barselc88. Holocaust museum shooter James von Brunn often signed his writings as "JVB-88." Hungarian far-right party Jobbik often uses the number 88. The party's program for the 2010 elections was published on 88 pages.[4]

It's always curious when something like this makes the air for a major broadcast. It would seem that this is the kind of thing you catch doing basic due diligence.

The good news is, Sailing lost. Exciting fight or not, I'd much prefer we never see someone with neo-nazi tattoos on a broadcast again.

KrmtDfrog Cory
@danawhite wtf is the deal with having a neo nazi in one of your organizations? Get that f*cker Salin the hell out of there.
Mar 04 Favorite Retweet Reply

@danawhite
Dana White @KrmtDfrog we are looking into it. I'm in AUS and just called over there to see if that's true
Mar 04 via Twitter for iPhone Favorite Retweet Reply