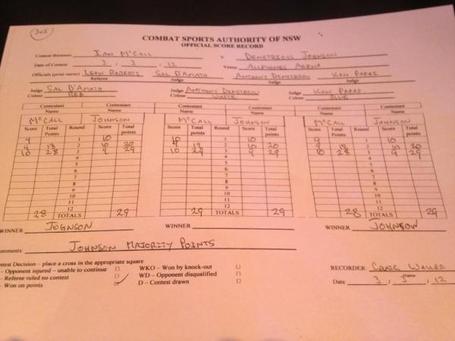 There was a lot of confusion about the scorecard of tonight's UFC flyweight tournament semi-final between Ian McCall and Demetrious Johnson. Bruce Buffer announced the scores as a split decision, even though he said it was a majority decision. DJ got two 29-28 cards, while McCall got one of his own by a 29-28 score. Shortly after that, it came out that McCall's 29-28 card was actually 29-29, so it really was a majority decision. And after all that, UFC president Dana White announced that both of those were wrong.

It was a draw. And they're going to to rematch next month. Despite what the guy wrote down on the picture you're looking at.

As you can clearly see, the picture above shows DJ winning. But the person that wrote this out got the first judge's score wrong. The first judge (sal D'Amato) actually had it 28-28, giving Johnson the first two rounds and McCall the third by a 10-8 score. That was not correctly documented by whomever wrote this up, obviously. The second judge had the first 10-10, gave Johnson the 2nd 10-9, and awarded the third to McCall 10-9 for a 29-29 draw (which is consistent with what we heard post-fight). The third judge had the first two rounds for Johnson 10-9, and the third for McCall 10-9 for a 29-28 Johnson card. So the official ruling (despite what that card says) was a majority draw.

I'm confused too, folks. But the end result is a majority draw and rematch in April, apparently. And the winner will meet Joseph Benavidez for the UFC flyweight title. Tough break for both fighters, since McCall clearly had a ton of momentum in the third and a fourth round would have been great for him, while Johnson thought he won the fight and now has to show up for a rematch. Strange, strange night.

SBN coverage of UFC on FX 2: Alves vs. Kampmann